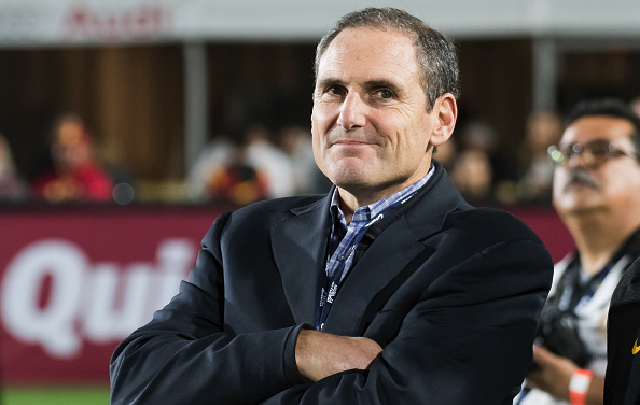 Threatening to take the Pac-12’s ball away from the networks and go home doesn’t seem like the right move, but maybe Scott and the conference’s member schools think a hardline stance like this might be the way to go. There is plenty of time to mull over that strategy. The Pac-12’s TV deal with ESPN and Fox expires in 2024. However, the Big 12’s TV deal with ESPN and Fox runs out at nearly the same time (2025, to be exact), so the Pac-12 likely wants to get a head start on posturing for a new agreement ahead of the competition.

Expiration of TV deals might also spur something else that Scott envisions: Further conference expansion and realignment. Could the Pac-12 become the Pac-16, which was being discussed six years ago when what became the Power 5 conferences were looking to expand and several schools were scrambling to join up with larger leagues? Scott said it’s possible that we could eventually see four power conferences made up of 16 schools apiece in college athletics. That could certainly make the Pac-12 more attractive

Pac-12’s Larry Scott doesn’t expect Power 5 expansion “for foreseeable future. When might it happen again? Perhaps when TV contracts are up"

64 teams and the rest will go to Div II. We gotta keep winning, winning big. Our ratings are our best ally.

College Hotline: On Pac12Nets president Lydia Murphy-Stephans stepping down and...

Pac-12 fans frustrated with the state of the Pac-12 Networks — whether it’s in the areas of dollars, distribution or definition (SD v HD) — are probably not upset about the depart…

Just two years ago, the conference conducted a thorough examination of the marketplace and determined that retaining 100 percent ownership of the Pac12Nets was the best course.

It’s difficult to believe the plans could have shifted so dramatically in such a short time.

That said, we’re only three or four years from the conference beginning to position itself for Tier 1 negotiations. Scott has bet heavily that 100 percent ownership of all content will translate to a windfall.

Thank you for posting. PAC12 Schools are losing a ton of money. How can they increase their revenues? How can they compete? It is crystal clear that they can’t keep the status quo. That is why something has to give and they ought to look toward us. You can bet that UNLV will push for an inclusion. Their academics standards are not good but does the PAC12 have a choice anymore?

I imagine we’re on their radar, but nothing will happen until the Big12 drama plays itself out. No conference will give up their chance to get UT/OU. Luckily, I don’t think the PAC12 will have a shot at either at this point in time.

I don’t think the PAC12 will shoot for UNLV; the network is already in Vegas so they don’t help there and academics won’t be ready in 4-5 years. I would think Kansas would be up there if the B1G doesn’t take them, Iowa State could be high as an AAU school if packaged with Kansas. Beyond that, Houston would have to be pretty high up the list of alternatives, especially if you could package them with Tech or TCU (if the PAC12 would take them over Tech).

Tech, UH, KU, ISU would be a nice haul for the PAC12 and give them access to a number of markets they currently aren’t in: Most of TX to include Houston & Dallas, KC and all of Kansas, Des Moines and all of Iowa, other midwestern cities that may be high on KU basketball.