The Houston Cougar Womens Tennis team will host American Athletic Conference opponents SMU and USF in a pair of weekend matches. SMU comes to the Barbara Wallace Winston Tennis Facility at 2 p.m., Saturday, while first serve against USF is scheduled...

ABOUT THE MUSTANGS
SMU enters the weekend with a 15-4 record and a 2-0 mark in The American. The Mustangs fell 4-0 to Baylor on Friday.

SMU has been led in singles play by senior Dasha Sharapova, who has posted a 16-2 record while moving around from the No. 2, No. 3 and No. 4 singles positions. Sophomore Liza Buss and freshman Sarai Monarrez Yesaki are tied for second for the Mustangs with 11 wins apiece.

On the doubles court, Monarrez Yesaki has teamed with sophomore Ana Perez-Lopez to pick up 10 wins while playing primarily at the No. 2 position. Seniors Macie Elliot and Mary Wright play at the No. 3 and have picked up seven wins as a pair this year.

ABOUT THE BULLS
USF enters with a 9-9 record after falling 4-0 at Rice on Friday. The Bulls will play Marshall on Saturday, in Houston before meeting the Cougars on Sunday. The Bulls are 1-2 against opponents from The American this season.

Sunday’s match will also serve as Faculty & Staff Appreciation Day. All University of Houston faculty and staff will be honored during the match.

The Bulls’ top singles players this season have been sophomore Ana Roman Dominguez and junior Juliana Cardoso. Roman Dominguez has tallied a 10-6 mark while playing at the No. 1 singles position this spring, while Cardoso is 10-5 playing primarily from the No. 2 position.

Cardoso partners with senior Olga Martinez to lead the Bulls in doubles play with an 8-5 record from the No. 1 position. Meanwhile, Roman Dominguez has teamed with each sophomore Nicole Dzenga and freshman Brooke Lashway to post 4-2 records with each.

Ouch. Just not in the Mustangs league right now. Not many are. Of course, it doesn’t help when 2 of our players are hurt and we start in an 0-2 hole and almost an 0-3 hole. Injuries have absolutely killed this program the last 2 years.

UP NEXT FOR HOUSTON
The Cougars return to action at 1 p.m., Sunday when they welcome USF to the Barbara Wallace Winston Tennis facility. USF enters with a 9-10 record after falling 4-0 at Rice on Friday and 4-1 against Marshall on Saturday. The Bulls are 1-2 against opponents from The American this season.

Sunday’s match will also serve as Faculty & Staff Appreciation Day. All University of Houston faculty and staff will be honored during the match. The Cougars will also give each fan in attendance at tomorrow’s contest a FREE can of UH Logo Tennis Balls.

#6Strong | Dimitrova and Rovira are here supporting their teammates from the stands #GoCoogs https://t.co/hJjAoJlOsr 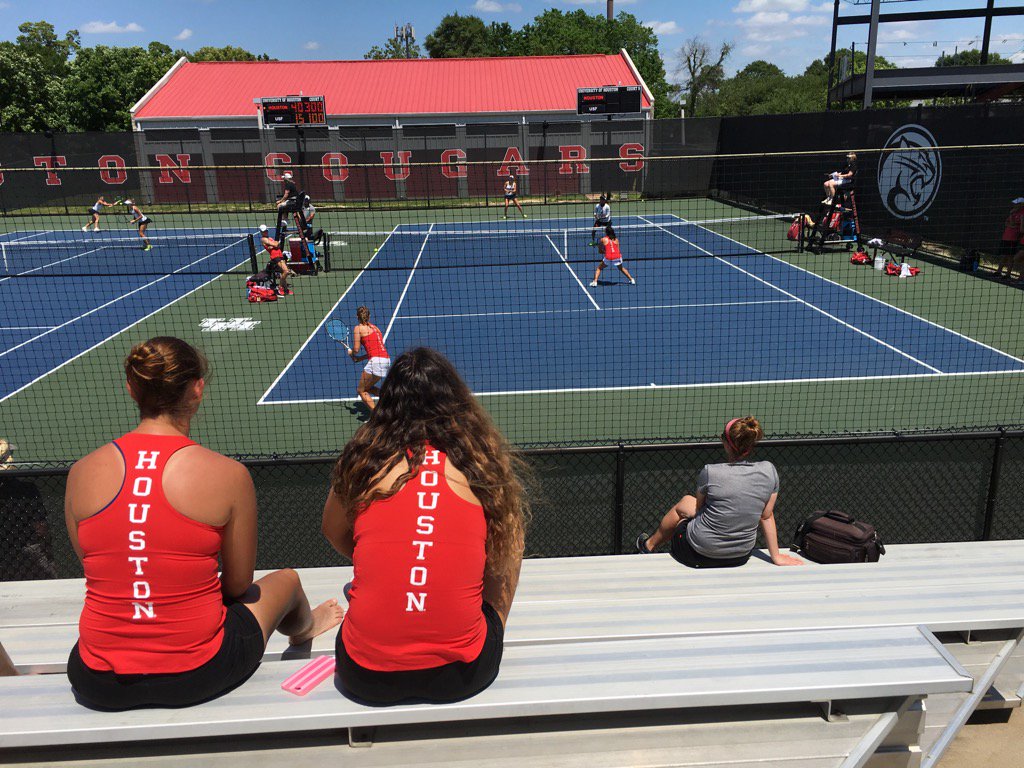 UP NEXT FOR HOUSTON
The Cougars wrap the 2017 regular season when they host Stephen F. Austin at 2 p.m., on Thursday, April 13, at the Barbara Wallace Winston Tennis Facility. Houston will then travel to Orlando, Fla., to compete at the American Athletic Conference Championship from April 19-22.