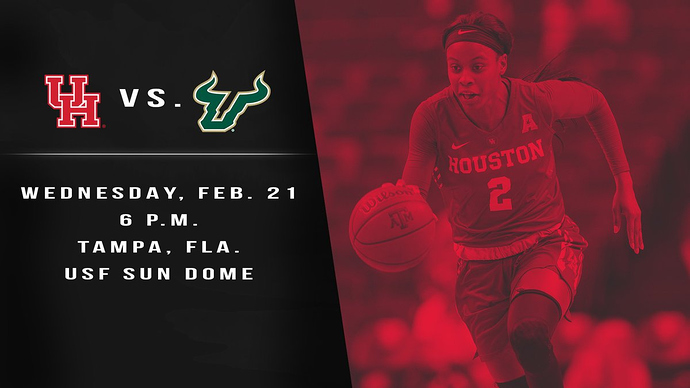 SCOUTING THE BULLS
USF enters Wednesday’s contest with a 22-5 record and an 11-2 mark in American Athletic Conference play. The Bulls enter the contest on a seven-game winning streak and are ranked No. 18 in the AP Poll and No. 17 in the USA Today Coaches’ Poll.

USF has a trio of players that average double figures, including a team-best 20.5 from Kitija Laksa, which ranks second in the American Athletic Conference. Maria Jespersen puts in 18.2 points per game, while pacing the team with 9.7 rebounds per contest, and Laura Ferreira averages 10.3 points per contest. 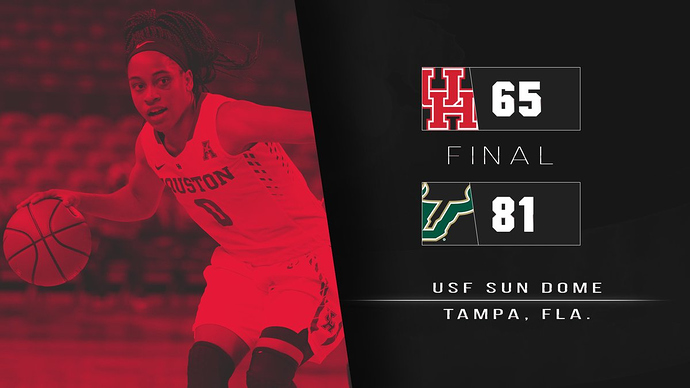 TOP PERFORMERS
Houston: Houston finished with a trio of players in double figures including a team-high 21 points from sophomore Angela Harris. The effort was Harris’ third straight of 20 or more points. Jasmyne Harris finished the contest with 14 points, while Serithia Hawkins added 12 points and a team-high nine rebounds.

USF: The Bulls had just two players reach double figures in scoring, but were led by Kitija Laksa with 32 points on 9-of-20 shooting. Maria Jespersen added 19 points, while completing the double-double with a game-high 11 boards.

Angela Harris finished the contest with five made 3-pointers to give her 74 on the season and move her to fifth on the Houston 3-pointers made in a season list. The five triples also gives her 126 in her career and moves her into eighth all-time at Houston, passing Roxana Button (125; 2008-12)

The Cougars forced 10 steals in the contest, giving them 329 as a team this season and moving them into 13th in school history.

Freshman Julia Blackshell-Fair picked up a career-high six assists in the contest.

Houston made eight 3-pointers in the matchup, giving them 208 on the season and extending the program record.

The girls are having a great season but still not ready for prime time. We are a few bigs away from being ready to compete with top 10 teams.