Boren and Bowlsby for a good part of an hour …

The best question given to brain dead Boren was the matter if everyone came to the meeting in agreement and he said basically … yes … SO WHAT DID THEY DO FOR ALL THOSE HOURS … play titly winks and sing ole fight songs.

I suspect Texas and TT were hot under the collar and that is why they left first.

Texas and TT leaders leaving first and earlier than everyone else does bring to question about their thoughts on the meeting. Maybe they will express their thoughts and opinions in the coming weeks. 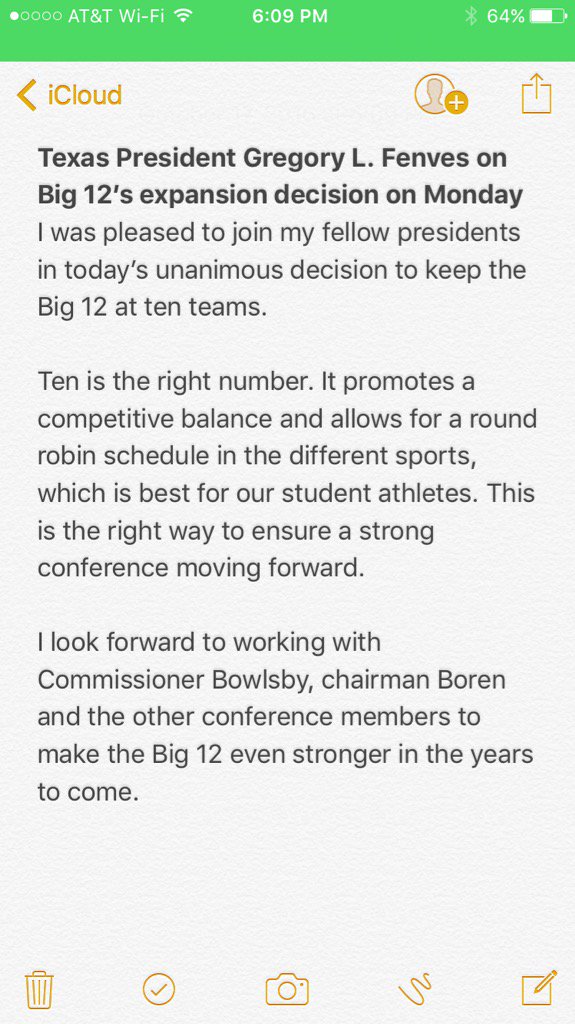 Fenves is basically saying “So long and thanks for all the fish…” as Texas moves on to another conference.

I want to read that into the release but all I see is complete agreement with the decision today (albeit a complete reversal on the position of whether 10 is the magic number for the conference). What makes people think UT is leaving because of this decision? I want it to be true because UT leaving the Big XII is the type of domino falling that will lead to a new opportunity for others.

Some theorized that UT was playing politics by openly supporting UH to gain political approval but knowing that UH would never receive the votes.

None of that makes sense unless this was a very elaborate scheme to squeeze the most money for the 10 schools out of Fox and ESPN and to take the eyes/focus off Baylor and its issues. Expansion could not have been a serious consideration given how this all unfolded today. I assume everyone must profess their agreement with today’s announcement to receive their share of the new $$$. Greed has ruined College Football even more than I thought.

As they say, FOLLOW THE MONEY. I’m speculating the networks paid them enough additional $$ so that it wasn’t worth expanding and ESPN can continue to get a great deal by paying fewer $$ to the the AAC while we currently keep the AAC propped up.

If UT is planning an exit, it’s because they see the end of the conference, and they’re not going to wait around for that to happen instead of moving on their own terms. I don’t think this is the end of this story.