Here’s another write up by your Coogstorian.

In this post, I present to you: the original [“OG”] building that started it all: San Jacinto High School so let’s go back in time… cue the music.

1914 - South End Junior High School is built in a neoclassical style with Doric columns, carved pediments, and copper spandrels. Designed by Oklahoma architects Andrew Solomon Layton and S. Weymyss Smith, the junior high school is built to reduce the city’s attrition rate (dropouts were very common). At the sum of $300,000 (in 1914), the three-story building includes amenities to keep bodies in attendance like large athletic fields and the city’s first indoor swimming pool. Rice’s women’s swim team uses the pool prior to building their own. 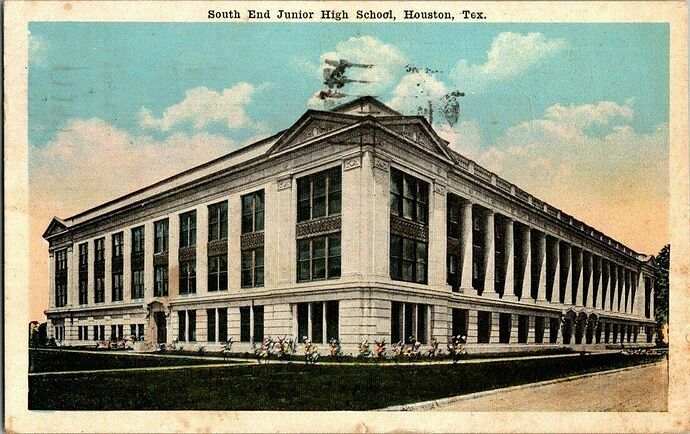 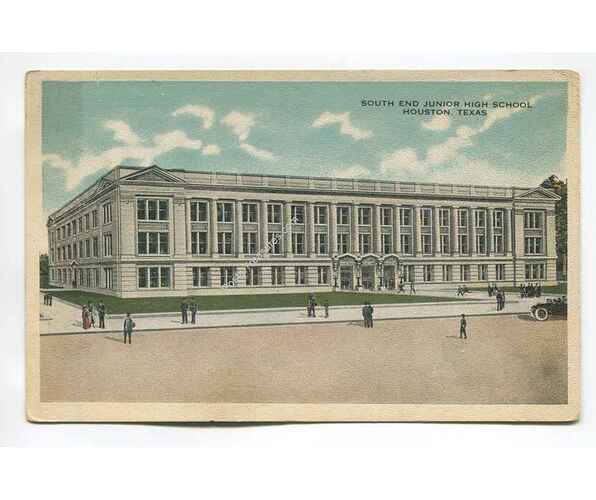 1923 - After the experiment of South End Junior High School proved to be a success, the school becomes the South End High School to meet the city’s increasing high school population. 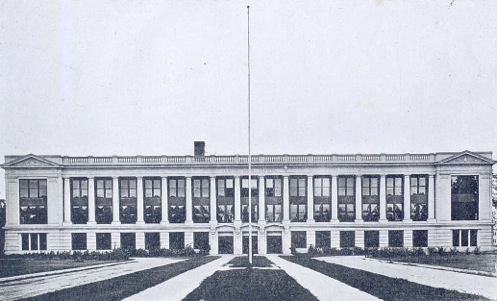 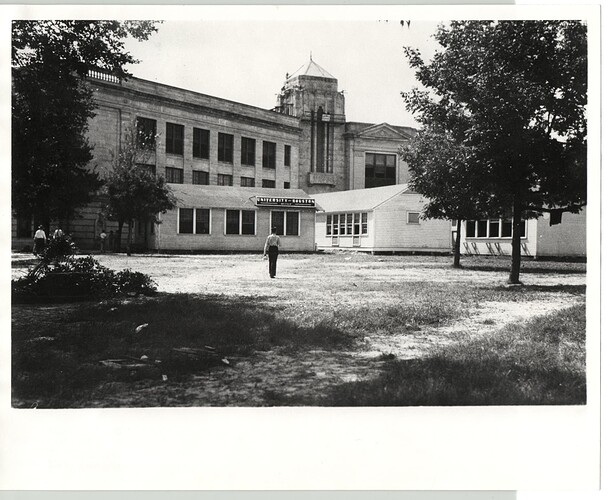 1929 - The East Wing, containing 20 classrooms, a boys’ gymnasium, and a third-floor lunchroom designed by Hedrick & Gottlieb is completed. This is the first wing that gave the building its curved design. 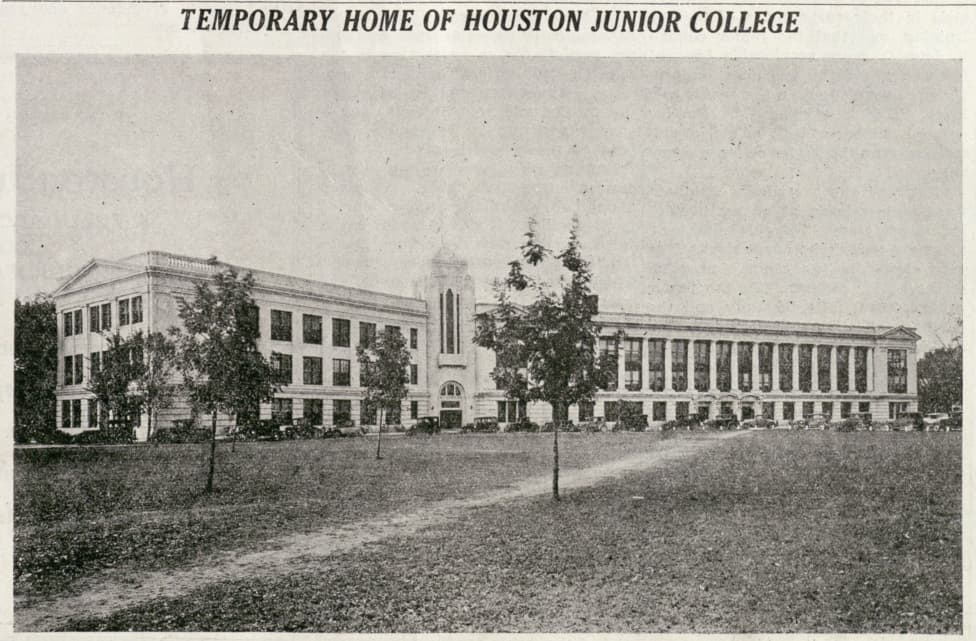 1934 - The University of Houston officially opens, as a private school under HISD control, continuing a night class schedule. The search for a permanent campus starts.

1936 - An Art Deco style West Wing is built. It is designed by Joseph Finger (Houston based architect from Austria and not related to the Finger family of Finger Furniture or Finger Co’s fame) containing an 1800-seat auditorium (with a firing range below the stage), classrooms, and a girls’ gymnasium. 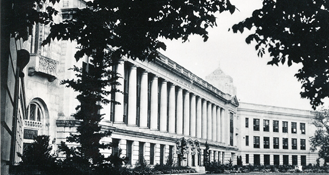 1939 - After 13 years, 1939 marks the final year that the University of Houston lives on the campus of San Jacinto High School.

Later life, after University of Houston:

1971 - Public referendum creates Houston Community College under the governance of HISD. Following the conversion of the Houston Junior College into the four-year state school of the University of Houston, the city was left without a public junior college. HCC begins offering day classes.

It’s to be noted that South Texas Junior College, a prospering private junior college of the South Texas College of Law notoriety, is still around in 1971 and later purchased in 1974 by the UH System to eventually become UH Downtown. There is an intriguing history of this downtown location.

1980 - HISD transfers the building from HTI to HCC and provides a $5 million-dollar grant for renovation.

1986 - HCC purchases the building from HISD to become the Central Campus. 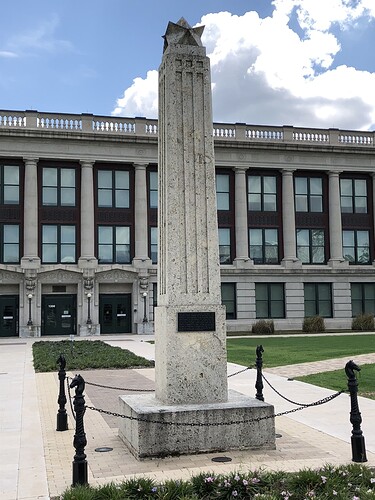 2013 - Houston Community College remodels the “San Jacinto Memorial Building” in its Central Campus with a $60 million-dollar update. The building is placed on the National Registry of Historic Places.

The advent of junior high schools in Houston was the result of educators considering the needs of individual students and their development and looking beyond the traditional strict curriculum. At the same time and in addition to this major reorganization, HISD had also begun to consider the needs of other subgroups of students - for example, exceedingly bright pupils, students with subnormal mentality, and those students who had to work. Adults who wished to attend college, but could either not afford or did not have time to attend a four-year institution were included in this consideration.

As a result, following a conference with representatives from the State Department of Education, the University of Texas, the Rice Institute, and Sam Houston State Teachers College, the Board of Education established the Houston Junior College in the Spring of 1927. The first session began on June 5, 1927 with an enrollment of 232 students studying Education, Spanish, English, History, Biology, Art, and Physical Education. classes were held in the San Jacinto Senior High School Building with a faculty mainly recruited from the staffs of the University of Texas and Sam Houston State Teachers College. These classes and other continued at San Jacinto until 1934 when the Houston Junior College became a four-year private university under the control of HISD. At this time, classes moved to other high schools and churches in Houston until the first University of Houston building, the Cullen Memorial Building, opened in 1939. 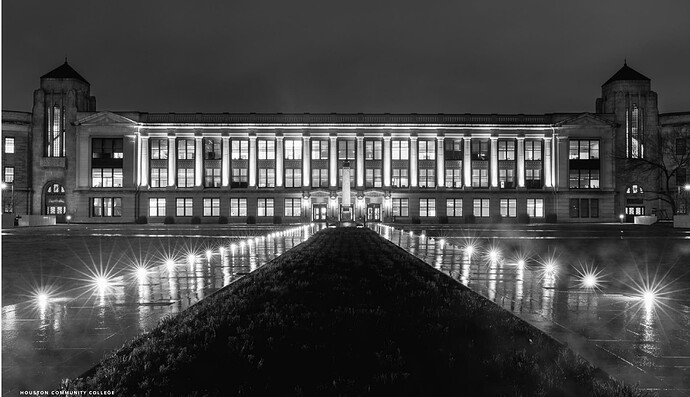 Some familiar names walked the halls of this building:

Do you scan the pictures yourself, @Woodedge ?

I search the web for newspapers that I can clip or other content that fits the posting.