Note: I already wrote this in a Football category response, I’m going to copy-pasta and update with new notes as I am able.

History of the University of Houston Downtown Campus

UH had a Downtown campus (705 Fannin) from 1943 until ~1973. This campus was a satellite, extension school that taught business courses, among other entry level courses, and helped to recruit working people to the main campus for degree completion. It eventually became a full satellite campus with freshmen-seniors in a campus population fluctuating between 1,000-1,500 per year and 8,000 continuing education students. UH moved the Downtown Campus from its final location (925 Caroline) due to losing its lease for the future commercial build of the “Houston Center”. Seeing that the lease was not going to be renewed, UH decided to rename it (in 1967) as the “Continuing Education” program that was planned to be built into the newly constructed Hilton College as UH’s “Continuing Education Center”. 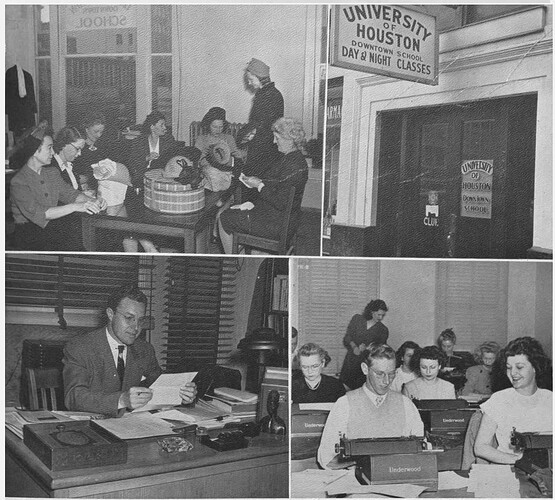 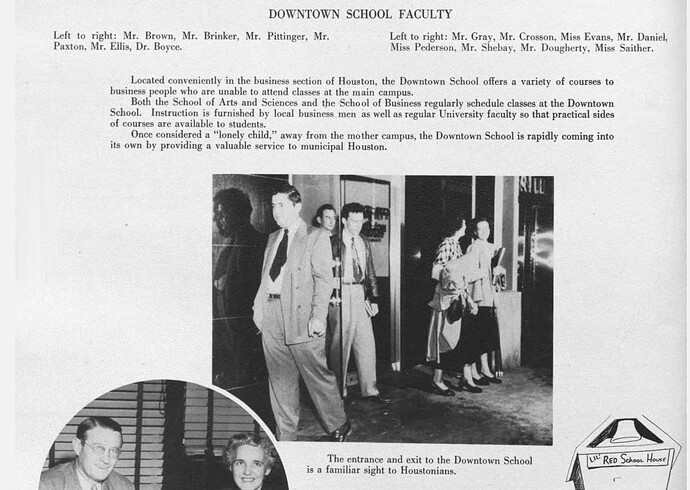 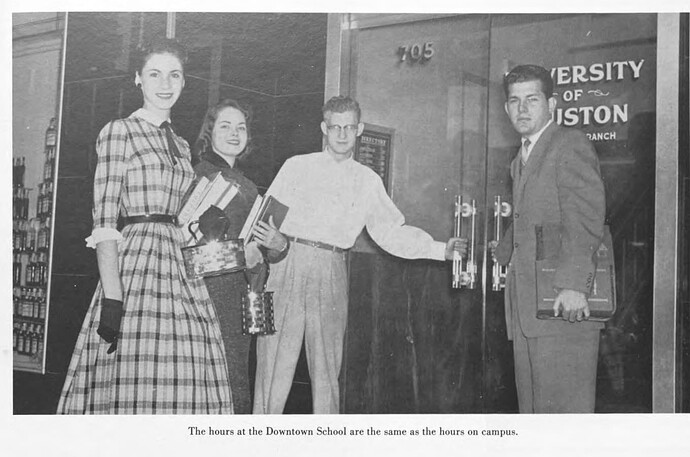 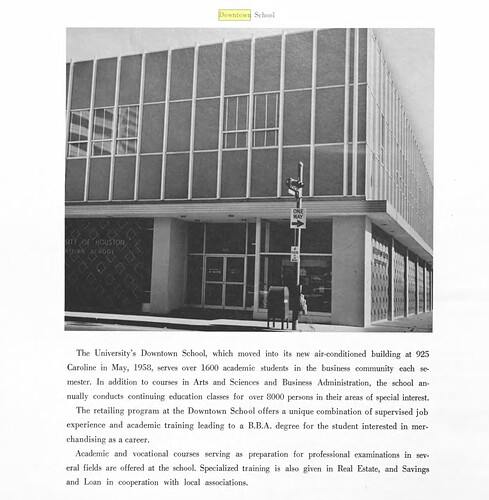 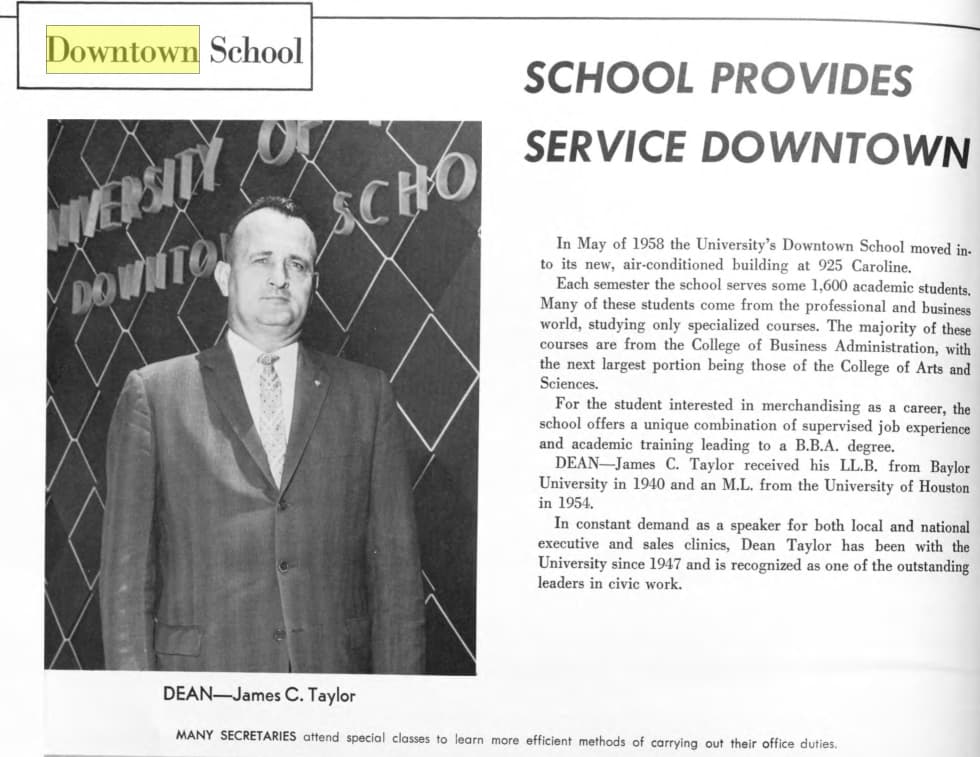 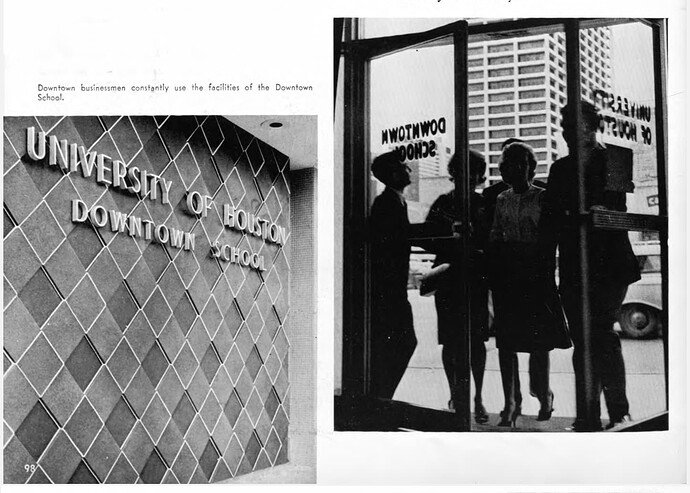 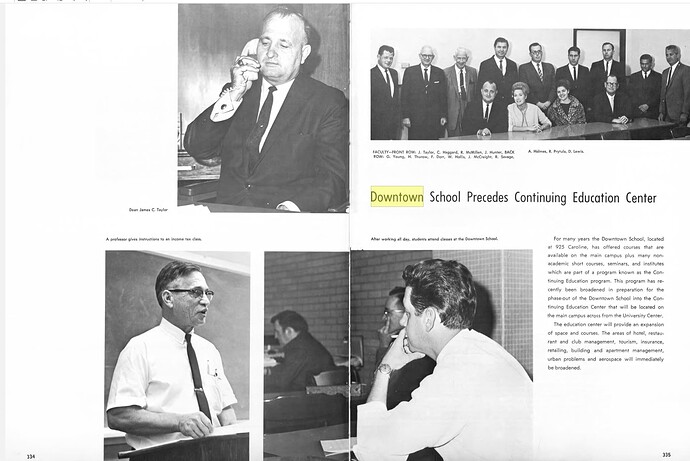 The creation of University of Houston - Downtown (“UHD”)

The result of UH-Downtown is from the controversial takeover of the South Texas Junior College (SJTC was, at one point, the sister school of South Texas College of Law, but they split) failed assets by President Dr. Phillip G. Hoffman. In 1971 HCC opened, remember Houston didn’t have a JC since 1934, and when HCC opened, it caused an enrollment blow to SJTC, a private JC, that was thriving from its founding in 1948 through the 1960s.

STJC was an excellent institution, but it couldn’t compete with HCC at a price point. STJC eventually fell into financial hardship and had to make a choice of closing or merging. In 1974, HCC had proposed a merger with SJTC, but the politics of the deal stalled. The current STJC leaders approached UH President Dr. Phillip G Hoffman, and without much additional counsel than UH’s VP of Finance, the small group drafted a deal and approved it for STJC’s campus to be UH’s fourth institution (after CL and Victoria). To recap, President Hoffman agreed to buy the campus without the state coordinating board’s approval . They didn’t find out until it was in the newspaper. Rightly so, people in high places were upset, but PGH persuaded that the downtown campus would be a separate school with non-duplicative programs. In an internal memo from Hoffman, due to the Downtown satellite school’s closure, if HCC had merged with STJC, Hoffman felt that UH would never have regained a foothold in downtown Houston. The purchase was an absolute, reactionary response.

Now, the purchase of STJC alarmed many :

After the 1974-1975 mess, the following 1975-1976 academic year, UHD formed its own identity as a campus with branding, logos, and a mascot. The campus transitioned to a four-year school in 1979 that had: “ open enrollment and low-cost, UHD could continue to offer the under-served and nontraditional students of Houston an education that focused on their needs and programs that they wanted .”

Technically, South Texas Junior College alumni are UH-Downtown alumni. I’d argue, despite not knowing the charter information, that means UH-D was actually “founded” in 1948 and not 1974.

There is a common idea that UHD was created to hurt Texas Southern University’s enrollment. My perspective is that Texas Southern had been offering four-year degrees since 1934 while UHD didn’t until 1979; therefore, UHD was not created to harm Texas Southern University. Based on my research above, it was a knee-jerk, “opportunity purchase” to losing a UH asset due to commercial progress and a way to regain it, despite it being a messy outcome. At the time, the purchase wasn’t well-thought-out of how UHD would complement UH’s new system. In Time, UH Downtown has grown quite a few strong programs that compliment the UH System, and I think UHD has taken the torch from the UH Main campus to teach the nontraditional student.