8 games that will shape the 2016 playoff race

It's impossible to know exactly how the race for the College Football Playoff will play out this season, but these eight games appear certain to make an impact in 2016.

Houston vs. Oklahoma (Sept. 3) is first in the hopper

Doesn’t look like the guy who wrote this article is even giving us a shot at winning this game; just maybe we can keep it close. He mentions Perine and Mixon, but no mention of the fact we are returning nearly all of the front 7 that shut down Dalvin Cook. I like our chances of containing their run game and making them air it out. I think our front 7 get to Mayfield and force him into mistakes.

I see the analysis as someone who really doesn’t know much about our team or has even really watched our games. It’s funny to me that all the analysis that I have heard this offseason is that our defense is sub par. That is ok, let them fall into a false sense of security about our defense. It makes me think about when the skeptics suggested that Vanderbilt and Florida State were going to run all over our D. That worked out well. Even so I remember a poster here quoting someone on the Vanderbilt site when one poster missed the game and asked “What happened?” Response “They blitzed the S*@# out of us!!”. Coach Orlando will be ready.

Combine this one into this thread. Stewart Mandel made a list of the 20 games you can’t miss of the CFB season. OU-UH came in 14th - 1 of 4 OU games on the list:

Michigan-Ohio State, Alabama-LSU and the 20 best games in 2016 you can't afford to miss Guy’s write up is pretty snarky.

5 from each conference and 1 non-conference 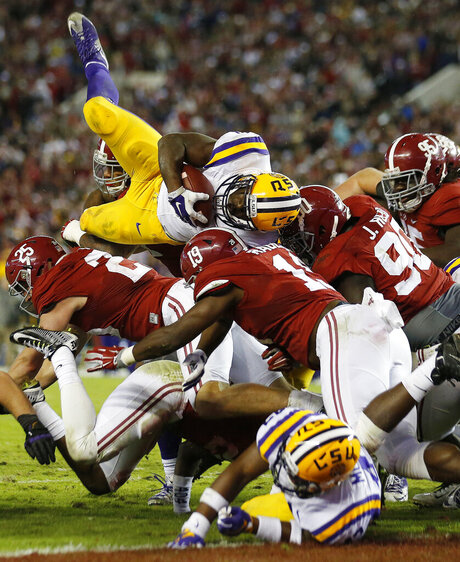 Pick Six: Games most likely to determine who reaches playoff

If you can only watch six games this college football season, well, you should probably consider changing jobs or something because that is no way to live. If that truly is your plight, though, we're here to help. Out…

OKLAHOMA vs. HOUSTON at NRG Stadium in Houston, Sept. 5

The “neutral site” is about a 10-minute drive from the Cougars’ campus, but expect plenty of Sooners support at the home of the NFL’s Texans. The stakes are high for the Sooners, but Oklahoma can slip here and recover to make the playoff. This nonconference game makes the list because of its importance to Houston and the American Athletic Conference. If Tom Herman’s team pulls the upset, it could vault the Cougars and by extension the entire AAC into the playoff conversation. Lose and the playoff pretty much comes off the table for the Cougars — in week one!