Big 12 expansion: Sources indicate a new development with the league's television partners makes not expanding the most likely option.

Big 12 expansion: Decision may be delayed as many have ‘no idea’ what will happen
’I have no idea what’s going to happen,’ one source said about the Big 12 adding teams

Big 12 expansion: Decision may be delayed as many have 'no idea' what will...

'I have no idea what's going to happen,' one source said about the Big 12 adding teams

One source involved in the process credited Big 12 commissioner Bob Bowlsby for helping the presidents even consider expansion.

Officials at two schools hoping to join the Big 12 say they haven’t heard from the conference in at least four weeks. 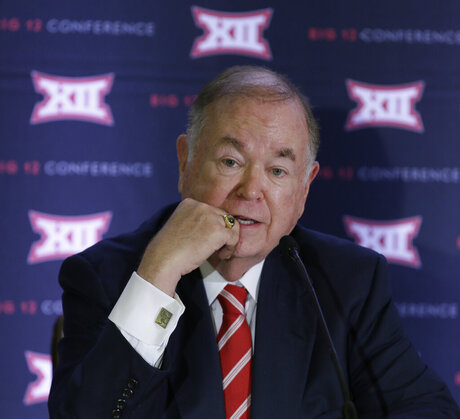 The Big 12 board of directors meets Monday in Dallas and the topic of expansion will be addressed.

Ultimately, the long-term stability of the Big 12 is predicated on Texas and Oklahoma happily remaining in the conference. At some point the Longhorns and Sooners have to decide if they want to be the most powerful members of the Big 12 or just another member of another conference. And adding teams to the Big 12 now doesn’t change that. 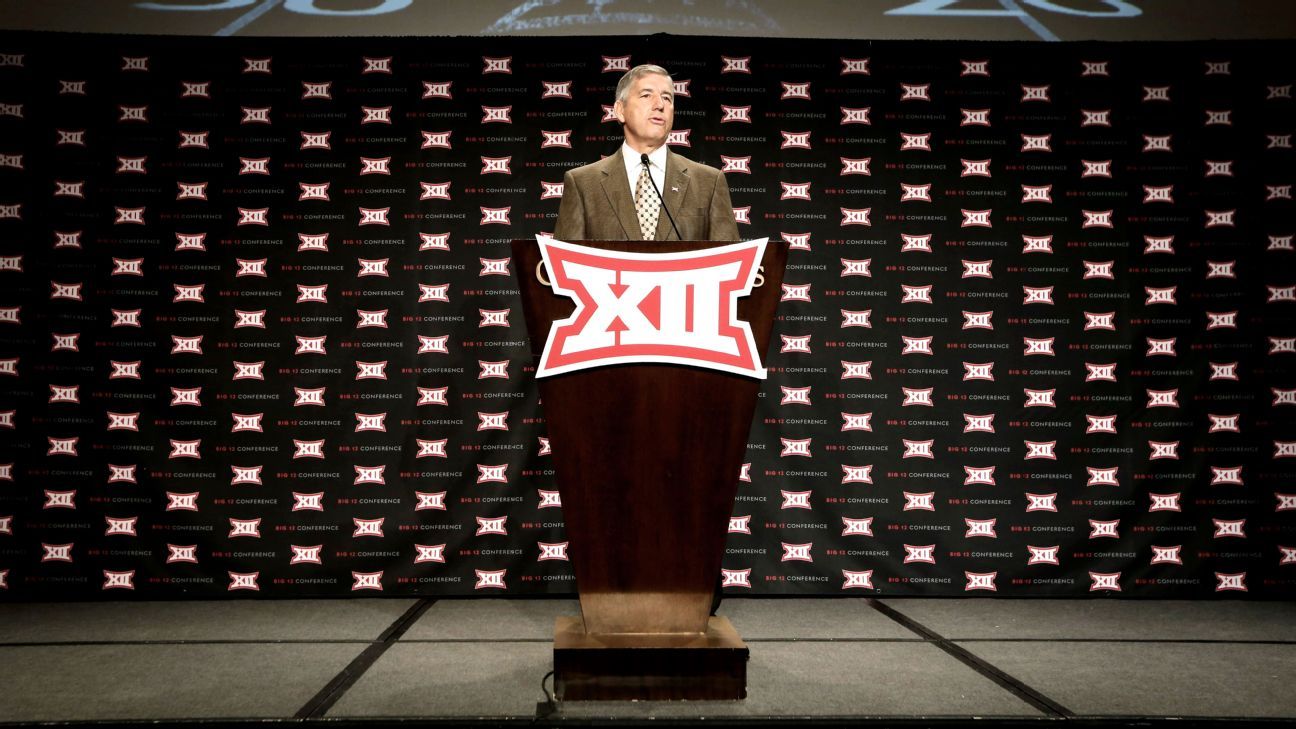 The Big 12 is a mess, on the field and off. The league is on the verge of missing the playoff again. In the board room, the dysfunction could reach its peak with Monday's final expansion meeting.

“We have a strong leader in Bowlsby,” one Big 12 official pointed out, noting that Bowlsby has the confidence of the league’s coaches, athletic directors and even presidents. “That makes a huge difference.” 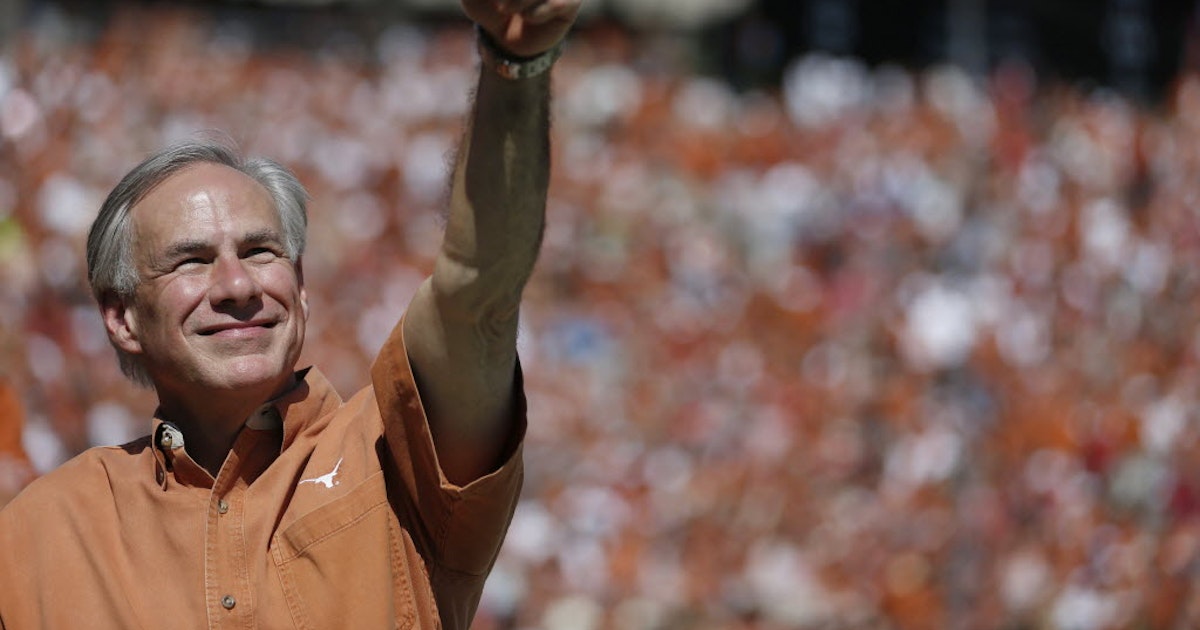 Without geographic diversity, the same problem is killing the Big 12 & football...

On Monday, Big 12 representatives will meet to consider the trap they set for themselves these last few slapstick months, and with any luck, they...

Because just like the old SWC, the Big 12 is cannibalizing itself. And there’s no place to turn for help. The league is landlocked, and nothing changes geography. 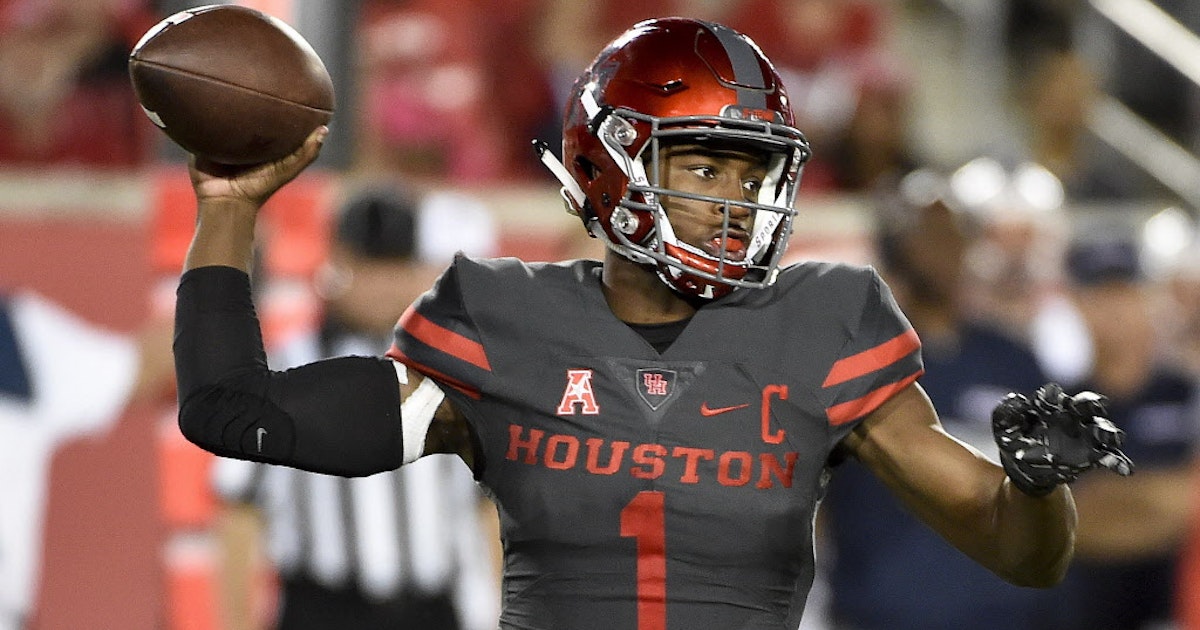 Should Big 12 add football-only schools? It's not the worst idea but has its...

Chuck Carlton, Big 12 football beat writer for SportsDayDFW.com and The Dallas Morning News, answers your questions about the league in a live chat...

Chuck Carlton: The should add is the far easier question: Houston and Cincinnati are the best candidates with the least baggage for full membership status. If football only is on the table, as I’m hearing, then the possibility of Houston and BYU comes into play. At this point, I still think the odds are the Big 12 does nothing but we won’t know until next Monday at the earliest. Getting a consensus in the room for eight votes won’t be easy.

The Big 12 Conference may decide to stick with its existing 10 members, despite investing money, time, and energy in searching for potential expansion candidates the past few months.

Multiple Big 12 administrators contacted in the past week offered similar versions of the same mantra in regard to Monday’s anticipated outcome: “Your guess is as good as mine.”

That’s because the power rests with league presidents and none of them has offered much in a public setting since Oklahoma president David Boren, chairman of the Big 12 board of directors, acknowledged at a Sept. 14 OU regents meeting that league expansion was “not a given” despite all the time, money and energy invested on the topic in recent weeks. 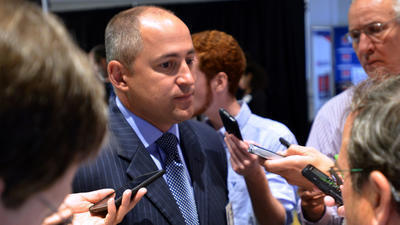 “Anybody outside the people who are going to go into that room who tells you they know what’s going to happen, well, they’re just guessing,” Benedict said. “And, to my knowledge, that group of individuals has not gotten together since [July when the presidents directed commissioner Bob Bowlsby to produce an expansion plan].”

– (Sankey) Dismissed the idea of SEC expansion in the near future. “We’ve been thoughtful and strategic in our evaluations over time and will continue to do so if that ever became more of a central thought,” he said.

Here’s what San Diego State’s Big 12 pitch looked like
It didn’t work out, but here’s how the Aztecs wooed the Big 12. 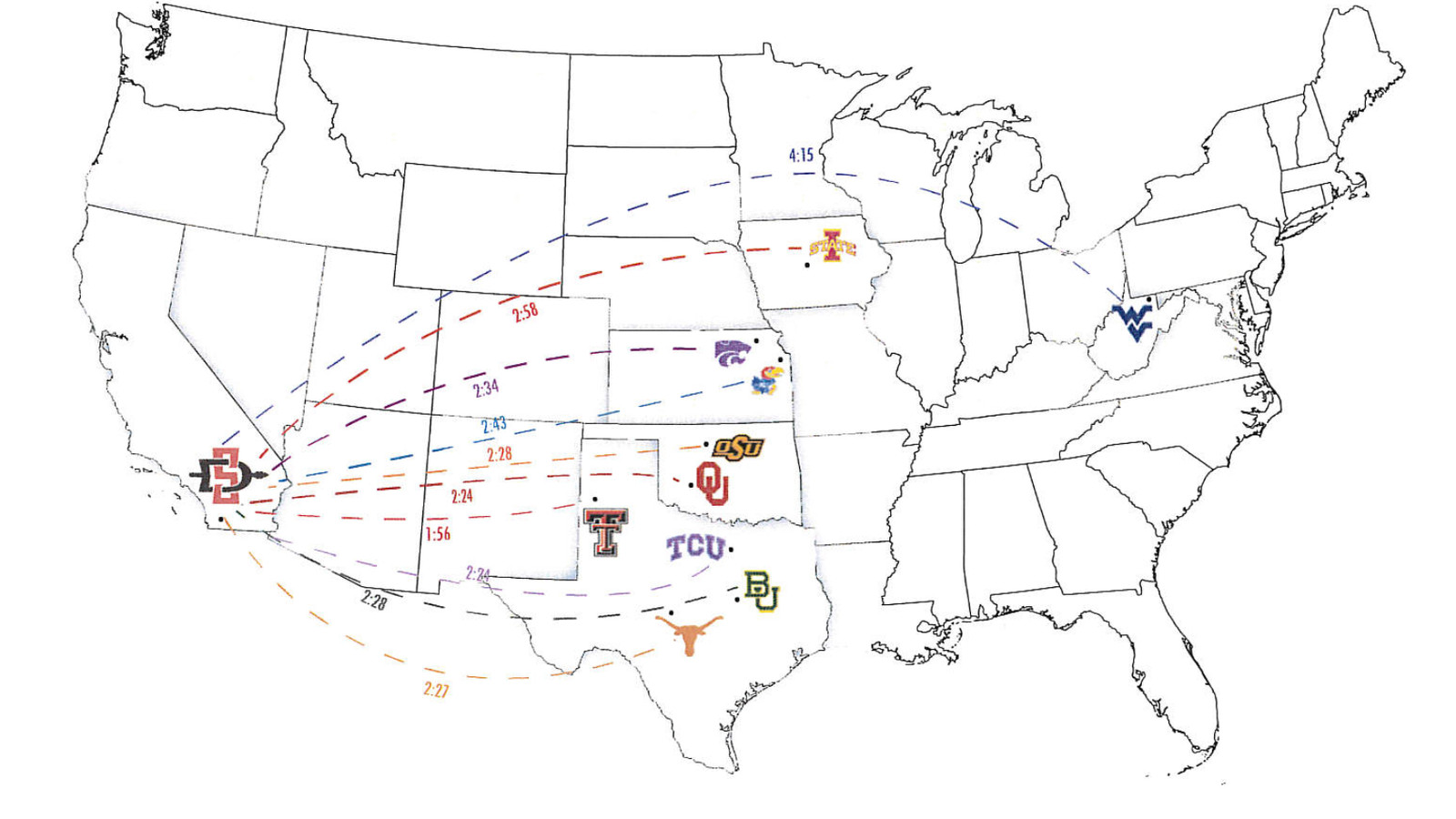 It didn't work out, however.

SDSU’s pitch sprinkled in a in a bit of everything, and its location in California was a unique offering other Big 12 hopefuls couldn’t make. It got a bit obscure in trying to explain the dual successes of its football and men’s basketball programs, saying things like, “SDSU is one of three schools to play in six straight football bowl games and play in a NCAA-sponsored men’s basketball event (NCAA or NIT) each of the last 11 seasons.” (One of the others was BYU, a much more serious Big 12 candidate.)

One source on Big 12 board of directors meeting/expansion: "Anything is possible when the presidents get in the room and start talking."

Also of note: presidents dinner Sunday likely to jumpstart Big 12 discussion. Even if expansion happens, may not officially know who Monday.

I thought deciding not to expand was the most annoying decision on the table. I once again underestimated this dumb conference. twitter.com/JonSolomonCBS/…

Yeesh. This is a situation where there won't be new information or magical unicorn candidates. Either make a decision one way or the other. twitter.com/dennisdoddcbs/…

I usually give the benefit of the doubt to entities for taking time to make decisions, but Big 12 is just procrastinating if it tables this. twitter.com/dennisdoddcbs/…

Two interim Big 12 CEOs and one headed out the door (Gray-Little, Kansas) will be among those making B12 expansion decision.

I've talked to several Big 12 sources past few days and here's what I can tell you about Monday: The Big 12 might expand, or it might not.

Just remember that the system, going back to the formation of the College Football Alliance and the BCS, depends on the narrative that the power conferences are inherently far superior to the other conferences, and it’s taken threats of anti-trust investigation in Congress to poke any holes, allowing Utah, Boise, TCU, Hawaii,and NIU to get even token participation here and there.

Utah’s and TCU’s promotions were almost more desperation moves than strategic, and only because they had popular opinion in their favor based on their on field results.

It has to have been embarrassing, not just to the Big 12 presidents and fans, but most specifically to their commissioner, and to the commissioners and power brokers of the other P5 conferences and the operators of the CFP contracts, that the Big 12 openly considered even one team when they were relatively stable, let alone 20. The presidents and boards of regents have more important things to do than to know everything about football, so they listen to their commissioners for guidance.

Bob Bowlsby was never part of forming the CFA or the BCS, and his only perspective as a commissioner is that of a conference losing four major members, being part of forming the first playoff at the major level, and having a membership that hardly resembles those he knows from his time in the Big 10 and Pac 10. I’m sure he fed the idea of getting to a better place somehow, which David Boren then ran with as an opportunity to stick it to Texas and diffuse the power of the conference, while also gaining more money, exposure, and clout for each member.

In money terms, it really doesn’t matter who they brought in. They’re happy to entertain Tulane and Rice. They’re university president-type of choices, with great academics, low athletic threat, decent to awesome travel destinations, happy to play along with others. What really started souring the idea for Boren is that Texas saw an opportunity to get some things they want - their Houston campus, some political goodwill, recruiting exposure in Houston where they’ve been slipping a little, etc. - and jumped on board the bandwagon. Oklahoma’s whole move was to be the white knight that saved the conference from Texas’ avarice, and that was being taken away.

This has nothing to do with how good our football team is. It obviously should matter, as they need all the competitive help they can get, and we’re about as much help as they can find right now. Kansas and Iowa State could still find ways to lose to Rice and Tulane, who are also in recruiting hotbeds and would gain a lot of ground if elevated, just like we would. All those arguments are distractions.

It has everything to do with keeping up appearances and calling bluffs. Texas isn’t the same evil empire we all know and love from the DeLoss Dodds days, or the Darrell Royal days. They don’t want to go to the Pac 12 and give up the LHN and be just another team and play late games and have the west coast liberals turn up their noses at how backward and provincial they are for being from Texas even though Austin tries not to be “that.” Oklahoma is the one that thinks it’s important enough to matter in any conference, and would roll in and dominate anywhere, and now is suddenly flailing to discover that not only would that probably not be true, but they can’t even get their way in their own conference.

Oklahoma is the petulant child that started the game, but when everyone else used their imagination and tried to invite the smelly kids, they threw a hissy fit and took their toys from the sandbox. We probably will never play OU again if we don’t get invited, and it has nothing to do with beating them this year. They just resent us for being part of Texas ruining their fun.

I think nothing has been decided by anyone except Texas and Oklahoma. The rest will listen to those two and decide who they want to follow. They may have their leanings, but, at least in our opinion, the preponderance of evidence recommends expansion, and they will ultimately listen to that over David Boren being a brat.

Reporters have no idea, they just have to report something. Remember that they all write on an 8th grade reading level, whatever that is worth anymore.