Who talks too much? David Boren or Boone Pickens?
Berry Tramel

Who talks too much? David Boren or Boone Pickens?

SEP 30, 2016 - Boone Pickens' recent comments about the OU president are rich with irony,.

The idea that Boren wakes up one from day to day, flip-flopping on expansion, is goofy. That doesn’t happen. The truth is, Boren doesn’t quite know how to solve the Big 12’s problems and in private will admit that. He’s just trying to keep OU in as strong a shape as possible. Trying to keep all options open as the countdown continues to 2025, when most of the relevant contracts expire.

Big 12's pass a blessing in disguise for U of L

Cardinals now thriving as football contender in the ACC

“I felt as time went on we definitely would have been invited to the Big 12, but I think this worked out so much better for us,” Jurich said. “They wanted to go in a different direction (in the Big 12) with West Virginia, and I hope that works out for them. I just know that from our standpoint, the grass is certainly greener, in our opinion, over in the ACC.” 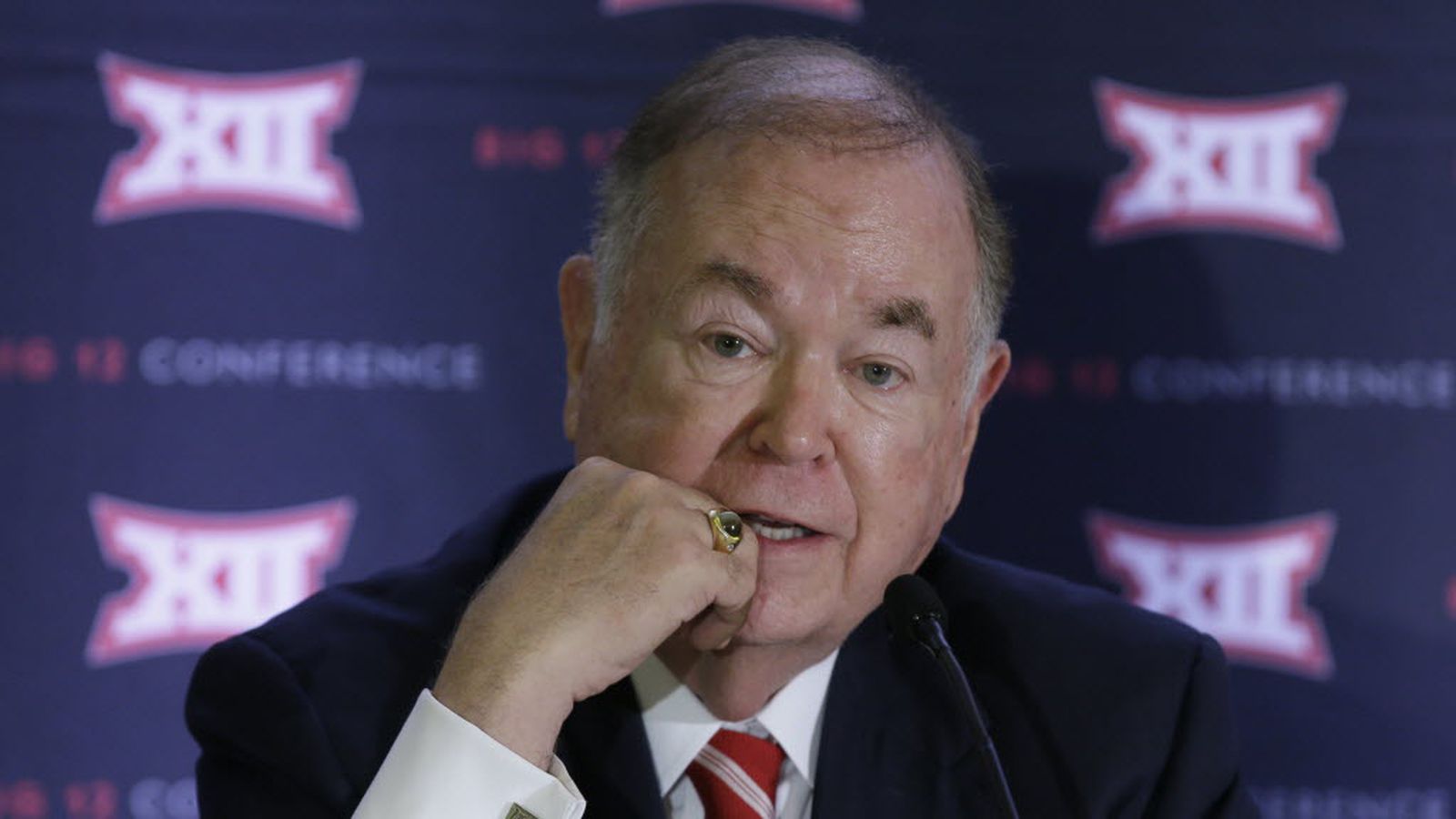 We’re going to finally get the other four Power 5 conferences to 16 teams each, like so many have anticipated for years. And we’re going to do our best to ruin the Big 12 in the process.

I. THE SEC STRIKES FIRST

The Southeastern Conference’s moves in expansion - including in the past - have always been moves of patient, steady expansion of its territory, and dominance within that zone. Despite being the spiritual home of “hold my beer and watch this,” the SEC’s opted for “let’s renovate the kitchen and refinish the deck” moves over the Big Ten’s “I BOUGHT A HOUSEBOAT” strategy. Texas A&M and Missouri - and Arkansas and South Carolina in the '90s - have represented a steady creep of the conference’s well-defended borders. Also, the SEC has key imperatives: kick ass more than anyone in football, and spite your enemies.

We’re going to need to reshuffle the divisions, though. We’ll bring Mizzou to the West, and shift Alabama and Auburn to the East. We’re going to get better SEC title game matchups this way, and oh, we’ve got an open slot still.

Montemayor was patting himself on the back for the tweet that came out from this Coogfans thread: Realignment: Big 12 at Loggerheads

The #OU news is not news #Sooners wanted to go to the #SEC when #Nebraska left finding a conference as a single or tied to #OSU is tough.

Again...where did I say OU and UT were going anywhere together? I don't deflect, I do wait for confirmation before naming a conference twitter.com/thejazzyute/st…

And one last one from the B1G:

If, and it’s a big if, OU can get away from little brother, I feel that the best option might be UH and OU to the SEC. As mentioned in the article, the SEC has a gentleman’s agreement about adding schools in the existing footprint.

But if UH and OU are added, think about what it does. It seals off SE Texas from UT and firmly plants a bigger SEC flag in the nations 4th largest city. By adding OU, it also gives the SEC a huge inroad into the DFW market.

As far as the divisions, it moves Alabama and Auburn to the east, and for the time being, gives some very strong SEC west schools a chance to shine on their own.

For the last 25 years, the SEC has been forward thinking and done very well by it. By adding OU and UH the SEC could, to paraphrase Winston Churchill, from I-35 in Missouri to San Antonio in Texas, an SEC Iron Curtain is descending across the Southwest. And there’s nothing the Big 12 can do to stop it…

Getting around the SEC gentlemen’s agreement … the aggies may or may not object … the support would HAVE TO COME from the BIG TIME SEC presidents and BofRs … like Bama and Florida and the Miss. schools for this to even get a footing that matters.

HOWEVER its articles like this that ARE NOT COMING FROM OUR BOARD that are gathering momentum and hopefully as S. Holmes would state … something could well be afoot should the Big12 expansion crater … that AND being ranked in the top ten and having the hottest HC helps.

Delany says Big Ten not actively looking to expand. “We aren’t in the drama business.”

LOL … they are already in the drama business with duds like Illinois … Indiana … Purdue … Maryland … Rutgers … and Minnesota gumming up the works … I wouldn’t put it past Delaney if they aren’t looking for ACTUAL winners … and Kansas is NOT one of them.

My mantra for the past 2 years: SEC is such a natural fit for both of us. Wish I could convince the SEC biggies. Don’t have a clue if this is one our folks have been working. Certainly nothing to suggest SEC has an interest in expanding. OU and Kansas would probably be the most natural fits, but they wouldn’t they have GOR issues right now? Bartender, pour me another double…

My mantra for the past 2 years: SEC is such a natural fit for both of us. Wish I could convince the SEC biggies. Don’t have a clue if this is one our folks have been working. Certainly nothing to suggest SEC has an interest in expanding. OU and Kansas would probably be the most natural fits, but they wouldn’t they have GOR issues right now? Bartender, pour me another double…

How are we a natural fit for the sec? We are an urban school. How many schools does the SeC have?

How are we a natural fit for the sec? We are an urban school. How many schools does the SeC have?

Now, if only OU could free themselves from their GOR and Okie Lite! We would end up in the Western Division of the new SEC: UH, OU, atm; ARK, MO, LSU, Ole Miss, and Miss State. Show me a better division anywhere in the country - in any other conference!

Geographically, we could tie up the state of TX. Extend the LA & AR borders. Ags capture the DFW tv market and complement us. UT would be the most natural, but are the most unlikely to want to go the SEC. At more than one time, SEC was interested in UH.

At more than one time, SEC was interested in UH.

Indeed, they were! And I was told just a few months ago, by a most reliable and informed person, that some of the important people with SEC member schools were talking about us as a possible addition. I have no idea whether any of that has developed further, but it would not surprise me at all.

I have no idea whether any of that has developed further,

It hasn’t … but I will give you kudos for trying

EEU is almost as consistent for the SEC as CoogBong and his psychic has been for the ACC … and almost as fun to watch as Dorothy and Toto following the yellow brick road.

The Big12 getting more iffy by the day … but through no fault of ours … the blame rest with certain presidents chasing their tails around the mulberry tree … one especially in particular.

We have heard that other negotiations below the radar are in the works but its almost as bad as EEU and CoogBong when these rumors have no basis in reality other than to pump false hope.

About the ONLY hope moi has is that Big12 not expanding is looking more like the Blues mobile in that final scene near the end.

Whatever transpires after that is anyone’s guess …

Don’t be so tough on CoogBoog. Maybe his psychic is visually challenged (AAC vs ACC). So far Boog’s seer isn’t any worse than others. We seemed to be such a sure thing for B12, now not so much.
Hang in there, Boog.