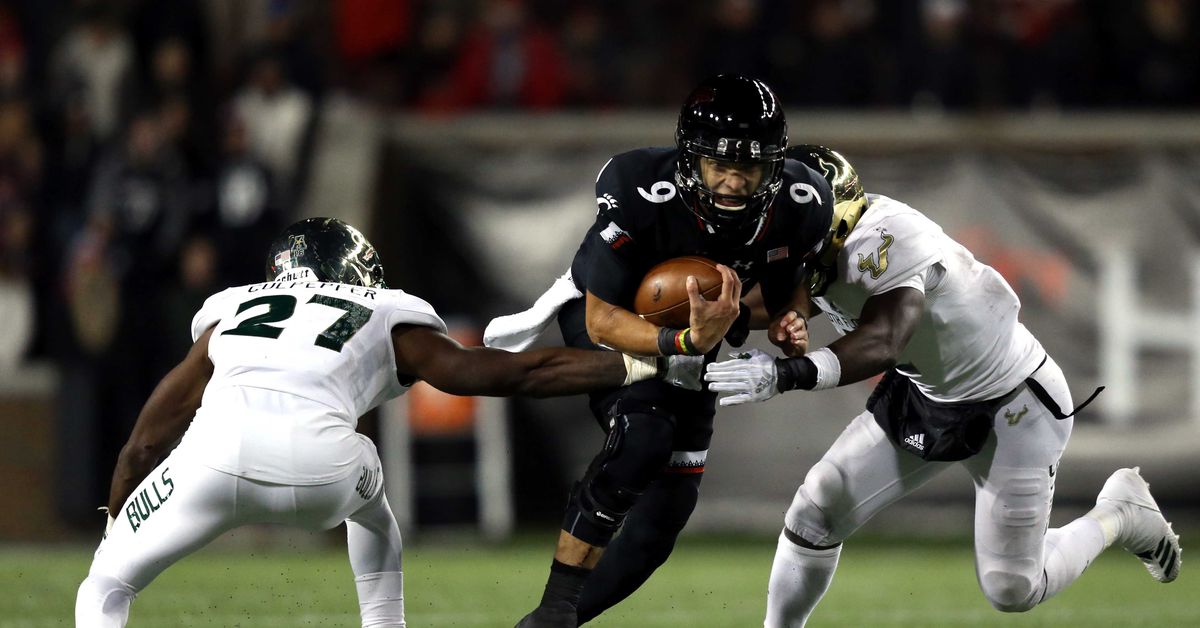 1. Houston: We all know and hate D’Eriq King, but the guy is a baller and under new head coach Dana Holgorsen, King should have another stellar season. Former USF QB Marquel Blackwell is the co-offensive coordinator with the Cougars, and knows a thing or two about being elite. The Cougars return their top four rushers, and five of their top six receivers, including 1,000 yard man Marquez Stevenson. 2019 Houston will be similar to 2016 USF. All offense, no defense. #AllGasNoBrakes.

Well, let’s wait and see on the defense. One thing is for sure, USF won’t miss playing us. And, we definitely know where this guy stands.

P.S. I didn’t know Perry was moving back to QB at Navy. I should read more.

Perry is dynamic but he can’t stay healthy throughout a whole game. Weather the storm while he’s in his good quarter and you’re fine.

Yeah. He’s fast as lightening but if he gets tattooed a few times, he won’t be very effective. And, we play them the last game this year so it’s doubtful he’s 100% then, if he can play at all.

If we stay healthy we should win the AAC. I think our defense will be pretty good IF it stays healthy.

Given that we had an unusually high number of injuries last year, the law of averages would lead you to believe we will be healthy this year.

I’m cautiously optimistic on our defense. I hope we get some updates from the defensive coaches every few days once camp starts up. We definitely should get some updates on who’s impressing them after each scrimmage. Really, updates on all positions but especially the defense and maybe O-line.

There’s no one guy who stands out as a clear all-conference or All-American selection (maybe Sprewell is close as all-conference), but with the FBS and junior college transfers we’ve brought in combined with guys like Sprewell, Godfrey, Anderson, Chambers, Fleming, Anenih, Gooden, etc. we will be competent at every position. And we have gone from razor thin at a couple of spots to having good depth at really every position. I also expect us to be better coached. So I’m thinking that while we won’t be a dominant type of defense, neither will we be one that offenses march up and down the field on. If we could just move from a woeful #119 in scoring defense to maybe the 70s, that would very likely make a significant difference in the won-loss column.

I don’t know how good our defense will be, but I expect it to be pretty good. I think we have beefed it up and brought in enough help to make it pretty salty. As for coaching, we will actually have P5 level coaching that will make a ton of difference. What we had last year would have been pretty good for a high school, or maybe junior high on second thought.

One thing I want to see is some much improved open field tackling…maybe its just me but I thought it got much worse under Dnofrio.

If we could just move from a woeful #119 in scoring defense to maybe the 70s, that would very likely make a significant difference in the won-loss column.

Our beloved Cougars should move up that much just because we won’t rush to the line and snap it EVERY down. Just dropping to the speed of a fast mortal will allow us to give up 25% less yards and points. If we see any improvement in the defense itself we should be in the 60s or better.

Edit: this does not take into account the tougher schedule. Playing against a high octane OK and top of the line WSU offenses may negate actual improvement and make it harder to see via statistics.

I feel much better about the secondary. Still have some concerns with CB but will feel bettering a couple transfers get their waivers.

The key to me is the front 7. We know next to nothing about a lot of the DL who will be in the rotation and really nothing about our LBs. I have no idea how good Edgeston will be or if Carmouche can handle the position. Then for the backups apparently we just brought in a transfer from NW who was on the verge of retirement but seems like a solid addition if his heart is in it.

So for the front 7 there are a couple I think I like and may be ready for a huge breakout season. Peyton Turner and Isaiah Chambers.

RW, listening to ESPNU radio, I heard Neuheisal saying that many coaches encourage under-performing players or those who don’t fit the scheme and won’t see the field to take a medical retirement, which allows them to keep their scholarships without counting against the number. Sounds kinda Machiavellian, but easy to believe.

Perry is dynamic but he can’t stay healthy throughout a whole game. Weather the storm while he’s in his good quarter and you’re fine

I was talking to a coworker about this - academy grad and former squadron CO who also is the HS head coach on the side - his big complaint was that they didn’t spend enough time getting Perry the reps needed to really understand the option, didn’t work hard enough on conditioning, and were too quick to go back to Abey at the first sign of trouble. Abey is a good dude but doesn’t have all the tools, while Perry is a great athlete but tries to be a one man show without the proper training. Their hope is that a full offseason will get him the reps to understand and trust the system, rather than wear himself out and isolate himself to get crushed.

They can’t waste time on developing a QB when they need to use all the time they can in teaching how to take out kinees.

I heard Neuheisal saying that many coaches encourage under-performing players or those who don’t fit the scheme and won’t see the field to take a medical retirement, which allows them to keep their scholarships without counting against the number.

I did not know this. Very interesting.