Fresh off a pair of road wins, the University of Houston Men's Basketball program returns to the friendly confines of the Fertitta Center to play host to ECU at 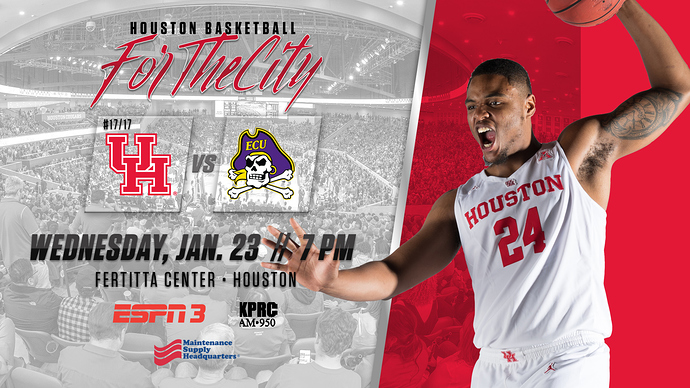 ABOUT ECU
• ECU has posted an 8-9 record in 2018-19 with a 1-4 mark in American Athletic Conference play.
• Pirates stand in a tie for 10th with UConn in the latest league standings.
• ECU is 0-6 in road games this season.
• Pirates have lost their last three games and four of the last five… Only a 73-71 home win over Cincinnati on Jan. 5 prevents a longer streak.
• In its most recent action, ECU dropped an 85-74 decision at Temple on Jan. 16.
• Against Temple, freshman forward Jayden Gardner led the Pirates with 27 points on 8-of-17 shooting and four assists… Sophomore guard K.J. Davis finished with 15 points, while junior guard Seth Leday added 12 points with a team-high 10 rebounds… Senior guard Isaac Fleming totaled 11 points with four rebounds and three assists.
• This season, Gardner leads the Pirates with 19.8 points and 9.4 rebounds per game… Sophomore guard Shawn Williams stands second with 12.9 points per game, while Leday ranks third with 11.7 points per contest… Fleming tops the Pirates with 3.6 assists per game.
• Head Coach Joe Dooley is in his second stint as ECU’s head coach… Now in his fifth season overall at USF and his 10th year as a collegiate head coach.
• Fleming has compiled a 179-119 record during his career as a collegiate head coach and is 65-61 at ECU.
• Previously built a 57-52 record at ECU (1995-99) and a 114-58 record at Florida Gulf Coast (114-58).
• Saturday’s game will be the first time that Dooley has faced Houston or Houston Head Coach Kelvin Sampson in his career.

Here are some that are very close that you can purchase: https://www.nike.com/launch/t/air-jordan-33-university-red-black/

Curious how these shoes play with this new closure system that has no laces. Jordans are usually heavy as well in my past experiences.

If I was rich I would get that pair… love me some Cougar Red!!!

That Gardner kid is really something. Leads the conference in scoring and is 2nd in rebounding as a freshman.

Too bad he stuck with his commitment to ECU. He was Nate’s AAU teammate.

I think just coaches wearing these with suits

Gardner is going to be something. I think I’m most impressed with how good he is at getting to the line and while i don’t think this game is gonna be close, how UH defends Gardner will be something worth watching. Does Corey Davis, Jr. get the assignment to defend against Gardner?

I don’t like harping on attendance but it is not looking good with 10 minutes to game time. Hope it just one of those late-arriving crowds like usual. How the traffic out there?

It will obviously fill in some in the next 20-25 minutes…but where is everybody?

Pitiful crowd!!! Houston fans suck as well as city we are 18-1 for God’s sake

Sound not working for anyone else?

Is the sound not working for others or is it just me?