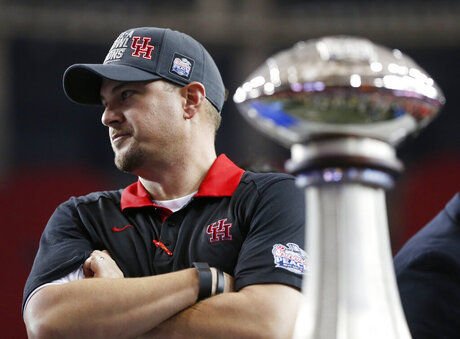 The schools not from Power Five conferences are making the most of their inclusion in the New Year's Six bowl lineup.

HOUSTON: The 15th-ranked Cougars are the clear favorites to get the New Year’s Six bid from the Group of Five. Tom Herman enters his second year at Houston as arguably the nation’s hottest coaching prospect after leading the Cougars to a 13-1 record last season. Quarterback Greg Ward Jr. and Clemson’s Deshaun Watson were the only Football Bowl Subdivision quarterbacks last season to combine for over 1,000 yards rushing and 2,000 yards passing, and Houston’s only loss last season came to Connecticut in a game Ward didn’t start due to injury. Houston gets an early chance to make a statement Saturday when it faces No. 3 Oklahoma at NRG Stadium, home of the NFL’s Houston Texans.