There was a fear on here the last time the Rockets were searching. Surprised and glad the rumors haven’t headed to Cullen…yet. 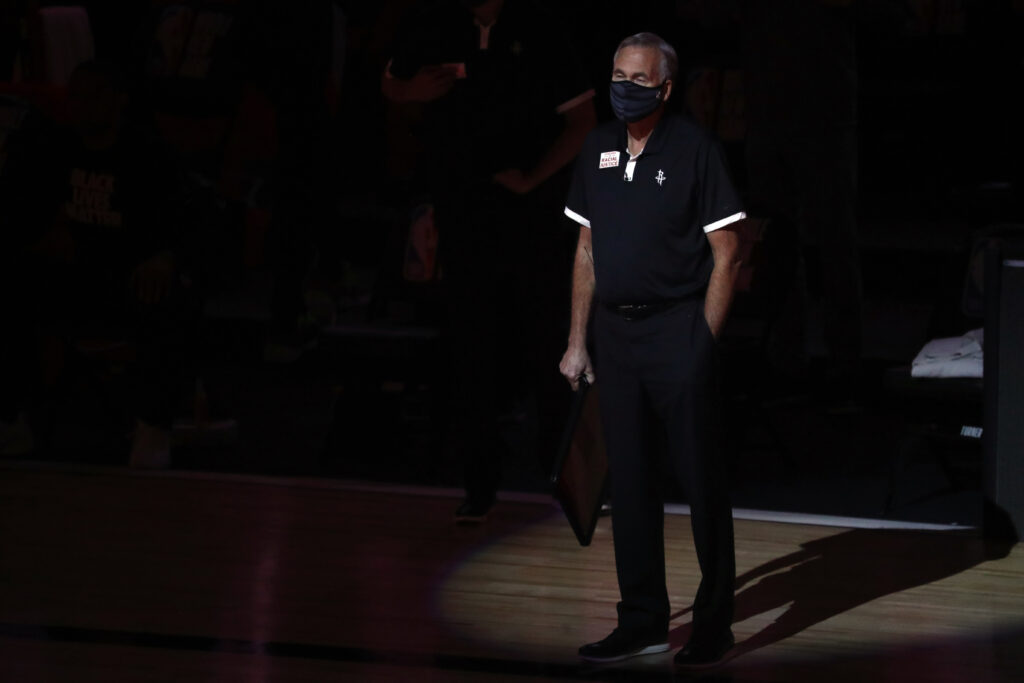 A bumpy flight home: Inside the breakup of Mike D'Antoni and the Rockets

This was the kind of basketball divorce both sides admit could have been avoided. This is the story of how it all went wrong.

D’Antoni seems like a very likeable guy. So letting him go is kind of saddening.

But I don’t think this team was going any farther with the way things are.

Whether that’s coaching or scheme or personnel, I don’t know. Maybe all of the above. But we’ve peaked with the way things are, IMO.

Ferrita has yet to put his mark on the Rockets. I wonder if he has a GM in mind. Edit just saw on ESPN that Morey stays.

There will probably be some directives to Morey, if he stays. Fertita will probably change that “small ball stuff” that didn’t work, Bring in a real center and hire a guy who knows how to coach and who has a championship pedigree. Probably won’t announce to playoff is over. (My Speculation)

With Morey I think they stick with small ball

I think you’re right. I think it’s analytics that guides Morey and I think analytics say more points with threes and guards.

Which may be right in the regular season, but I think the Lakers series showed that a team determined to play tougher defense in the playoffs can stymie a team like the Rockets.

Since we’ve basically given away most of our draft picks to OKC, it might be a better idea to dump Harden and Westbrook, try to recover some draft picks, and rebuild.

And if that’s the strategy, I think we should rebuild with a new GM. Morey’s had lots of time and appears to have had free rein to do what he wanted. But we’re not where we need to be, so he needs to go.

I agree with Lawbert. Time for a total change with the Rockets.

I assume you are kidding. His generosity has been a godsend for UH and he has lost countless millions during this pandemic.

He was unwilling to pay the luxury tax for the past few seasons. He cashed strapped right now, if I remember correctly he leverage some of his businesses to buy the rockets.

I was a big fan of Sam Cassell when he played for the Houston Rockets. Tyronn Lue and Sam Cassell are on the Los Angeles Clippers coaching staff. The Clippers lost the series to the Denver Nuggets 4-3, losing the last 3 games. The Clippers had 15 plus points leads in the second halves of games 5 & 6, and 10 plus points lead in the second quarter of game 7. That being said, I would vote for Jeff Van Gundy as the Houston Rockets next head coach.

I am voting for Mark Jackson.

Well it’s been a different story for the Rockets. He continuously lowballed D’Antoni. D’Antoni didn’t seem like he wanted to leave… he just didn’t want to do business with TF anymore. And now we’re stuck picking a HC that won’t have the pedigree or experience of D’Antoni

eff Van Gundy as the Houston Rockets next head coach

Some of you guys have forgotten that Jeff Van Gundy wasn’t a great coach. He was very good with the defense but players always seem like they were depressed in those after fame interviews. I don’t want to live that again. I wish Rudy T had a younger brother like he was. Rudy T was the best Rockets coach, ever.

Not kidding at all. He is cheap.

I don’t think it matter one bit what players the Rockets have this year. It has already been scripted by the NBA that the Lakers are going to win another title this year! That’s why they resumed the season this year!

All the Lakers had to do was foul the living daylight out of Harden to keep his scoring way down and they would win the series! And those shady refs would interpret it as “great defense” by the Lakers!

But on the otherhand the Rockets were being called for fouls because they didn’t move aside to let LeBron score! Those refs were like: “How dare you want to get in the way of King James while he wants to score! Foul!”

We simply have to accept the fact that the Rockets are going to have a lot better chance in the regular season at beating the Lakers, but in the playoffs; however, the refs are not going to let a fair game to take place! Too much at stake! The Lakers are the face of the NBA and the league is going to do whatever it take to make sure its star team have an advantage in every possible way!

It has already been scripted by the NBA that the Lakers are going to win another title this year! That’s why they resumed the season this year!

I don’t want to speak too soon, however, after watching 3 games of the Lakers/ Nuggets series, I can deduce that if the Nuggets keep playing their ball, the Nuggets will win this series. They lost one game on a " Miracle" shot by the Lakers, and dominated the last game. LAKERS are in Trouble.

If Rondo and Caruso are hitting shots the Lakers won’t lose… I’ve never seen Rondo knock down 3s like he did against the Rockets in round 2.

The Nuggets has been neutralizing both. Rockets had no Answer. Nuggets do. Hence, Lakers are in trouble. Series should be 2 - 1 Nuggets but for a miracle shot.