OT my family is Proud

We all wish for success for our family, my nephew has been our stand out football player since he was a kid. I’ll let my dad, his proud granddad, explain more

My grandson will be the starting quarterback and strong safety/outside linebacker at SJHS this year. He has been attending Ivy League camps this summer. This week he received an offer from Brown University. After visiting most of the Ivy League campuses Brown became his front runner. Selling points were their facilities and coaching staff. Brown HC, James Perry is a 1990 Brown graduate. As a player he won games and multiple personal
awards. He has been an ass’t coach at Princeton and Dartmouth.
What sold John was the coach’s positive attitude, “We’re building a winner here” and the asst coaches interaction with recruits.
John is being recruited as an “athlete.” The coaches say they want to try him at outside linebacker and running back.

My grandson is very excited and grandad is very proud.

I have been a proud Cougar since 1957 and in years past when I was still working and physically able I was a season ticket holder, a Corbin Robertson donor and funded football scholarships. Under CBY and coach Todd I helped with recruiting but this is my first chance to see recruiting from the inside. I thought some of my Coog friends might be interested in what I have picked up and share my great elation.

It’s tough to nail down an offer, even tougher at an Ivy.
Six players on the roster from Texas and even more from Florida.
They have a female asst. coach for QBs. Hmm.
With his academic background at SJHS and now the training at Brown, he’ll be set for life. Maybe a UH Law degree?

Three grandsons and not one wants to be a lawyer like their dad or grandad. Oldest now at Bucknell will go into some medical field, the athlete will try business, the youngest technology. Just pleased U of H gave their grandad who grew up poor in Galena Park a chance to set a foundation for their opportunities for success.

Congratulations Jim, I know you are proud and justifiably so. Am I correct in assuming that SJHS is Strake Jesuit? That’s a very good school and I have gone to several of their games over the years since my daughter was the director of dance at St. Agnes and her Tiger Girl dance team would dance at the Strake home games. They’ve had some good players come out of there.

Brown University has a beautiful campus. My last home port was Quonset Point, RI and I had a chance to see it driving by. I am sure your grandson will enjoy his time there and of course get a top flite education in whatever field he is pursuing. Do you have another attorney coming up?

I’m so happy for you, Jim. I know you’re proud enough to burst. 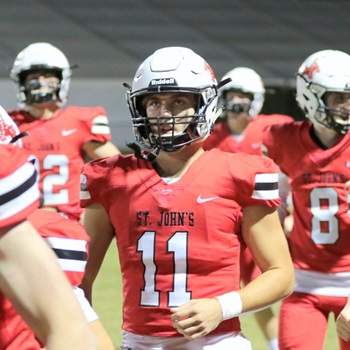 That is cool Law, i didn’t even know that existed. I wish i was better, i wanted to put up is twitter announcement. So cool to feel like the big dogs and nothing is like hearing the PA system announce your family name.

The dude is JACKED!!! SJS rarely has players like that!

Dude is a beast, won in wrestling this year. Goes from one sport to next, never a break. Really smart too, i remember him telling me as a freshman how unrealistic Madden is, lol. He really has busted his butt to get a scholly in football. To have numbers that would impress was the goal, thanks for noticing!

Well, then I may have to take back what I said on the other string about St. John’s being mediocre this season. A player like that might just be able to single-handedly “carry” the team to greatness!!!

I don’t know if because of Covid but they streamed the games last year so i got to watch him. They used him as running QB and one drive they went to him every play all the way down the field capped with a 5 yard td pass. My favorite play though is when he options to the RB he always turns into the lead blocker and usually destroys a guy.

Colonel: Thanks for finding those highlights and posting them. John tells me St. Johns has a good group of offensive linemen this year and a stout defense. Mostly upper classmen. Also the best group of student support they have had in some years. The Mavericks will be making some noise this year.

UPDATE: John just got a call…Yale has offered. Now I see what some of these young men face when making decisions about their future academics, athletics and life.

Harvard be calling next!!

Edit: I tell people I graduated from Harvard!!
I give little delay b4 I let them know it was Harvard Elementary

Jim: The very best congrats to you and to your family. After reading up on this young man, I am certain that I know where his toughness came from…
For those of you who do not know Jim…he was a force of nature in the courtroom, who cast a very long shadow with his success. There is no better example of Cougar Toughness than Jim…
Congrats from our entire family, especially from Pat and Art who are no longer with us.