UH’s first “home” game of 1976 and as members of the SWC happened at Rice Stadium on this day.

Thanks for reading our story: 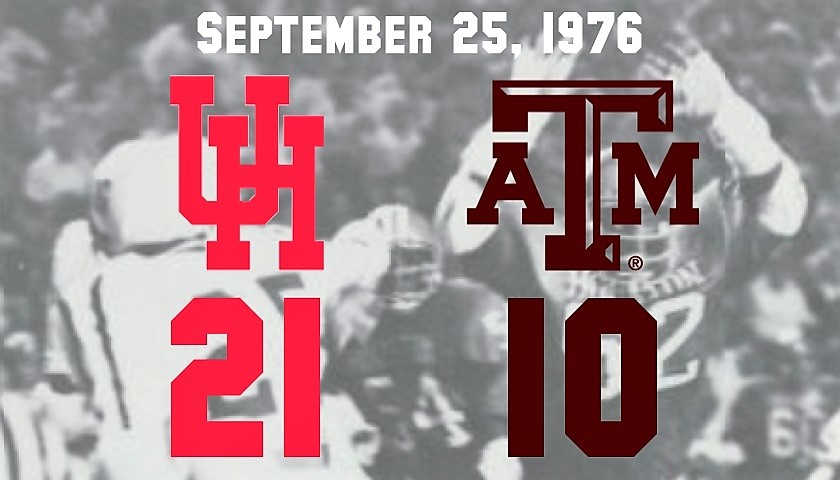 This is The Rest of the Story following our tweets (here and here) about this game.   September 25, 1976   After two weeks on the road, the Houston Cougars faced Texas A&M in their first “home” game of the season. The Aggies came into the game as...

I was there and it was classic.

Three humorous things I remember about that game…besides the score !!

** On first aggie series, they had a third and 1, they called a TO to discuss. Everyone knew the play
…Big aggie FB would get ball (George Woodard)…they called a TO on first series ! Snap ball, Whitley
levels Woodard for a 3 yard loss. TONE SET !!!

** Stadium announcer says that "there is a Cadillac in the parking lot with engine running, license number,
…long pause…It is MAROON !! Cougars crack up !!!

** After making fun of UH band at halftime, the “great” aggie band takes the field. Apparently they take their cues on when to turn in formation from the lead guy blowing his whistle…they start off and almost immediately start turning wrong, running into each other…It was hilarious. I later learned that a bunch of UH students had whistles and were randomly blowing them. Aggies were not amused.

My favorite game of all time was that year was at rice with rice being the away team. With about 5 minutes to go in the fourth the announcer said that cotton bowl ticket applications will go out to season ticket holders.

Really fantastic game, great crowd and very exciting football. One of my all time favorite games.

I thought that happened to them at the Rice game. I don’t remember it at our game; but then, I didn’t watch their band, I went for a restroom break. It’s like there band has done the same routine for a hundred years, it all looks the same.

My favorite game of all time was that year was at rice with rice being the away team. With about 5 minutes to go in the fourth the announcer said that cotton bowl ticket applications will go out to season ticket holders.

Hoss Brock was getting sick to his stomach – which is a good thing. He was as big a jerk as the state has produced.

My friends and I were wondering why the great aggie band was having so many missteps. It was hilarious.

Like I said, at the time we could not hear the whistles and didn’t find out till the next day what had happened.

As part of the UH band that day, I knew the UH Band did a great job with their performance that evening. But since we were at field level, we did not see the mayhem of the aggie band till film study later that week. The aggie band used to march people who carried sousaphones with no mouthpieces. They did not play. They just carried the sousaphone, so they could look big, when they played texas (little ut). The aggie band at that time was not a good musical organization. They have improved (a lot) over the years. But back then, (as someone who has a masters degree in music) they were not very good. We enjoyed their problems when we watch the 16 mm film later that week.

I was in my first year at UH, and sat in the end zone. It was a very intense game, lots of hard hitting, but A&M couldn’t solve the Cougar defense. I remember just sitting in my seat after the game basking in the glorious victory, and then seeing the Cougars’ bus leaving as I walked through the parking lot and yelling, “We’re going to the Cotton Bowl!” at the players, who were very animated and excited in the bus.

That was a special year…Cotton Bowl win on top of that.

That was a magnificent game. Great team that year. Ran into an Aggie Corp. member at halftime. He was incredulous. We had no idea ya’ll were this good. Our nationally ranked, top ten team is being schooled. Ah, a great day.