Back-to-back shutouts for @UHCougarSoccer's Rachel Estopare as she is the American Goalkeeper of the Week!!! https://t.co/S2iQKXcWN6 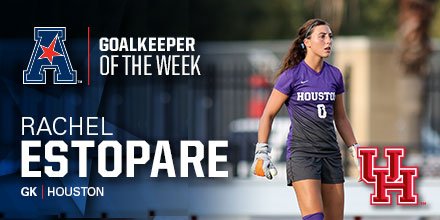 Over the weekend, Estopare earned a win and draw while collecting eight saves without allowing a goal in 200 minutes played. The Bend, Ore., native captured her third consecutive shutout and is 2-0-1 on the season.