This is a pointed question with a large section devoted to whether or not Houston would be deserving. My biggest beef with this type of article is that everyone usually says “what would Houston do if they were in the SEC West?” OK, what would any team do if they were in the SEC West? If the SEC West is the barometer, just take the SEC West, have them play each other, and crown the champ the national champion. It’s kind of hard for me to really take it seriously when Dana Holgorsen is saying that G5’s couldn’t compete in the Big12 when you have Kansas & Iowa State as members. 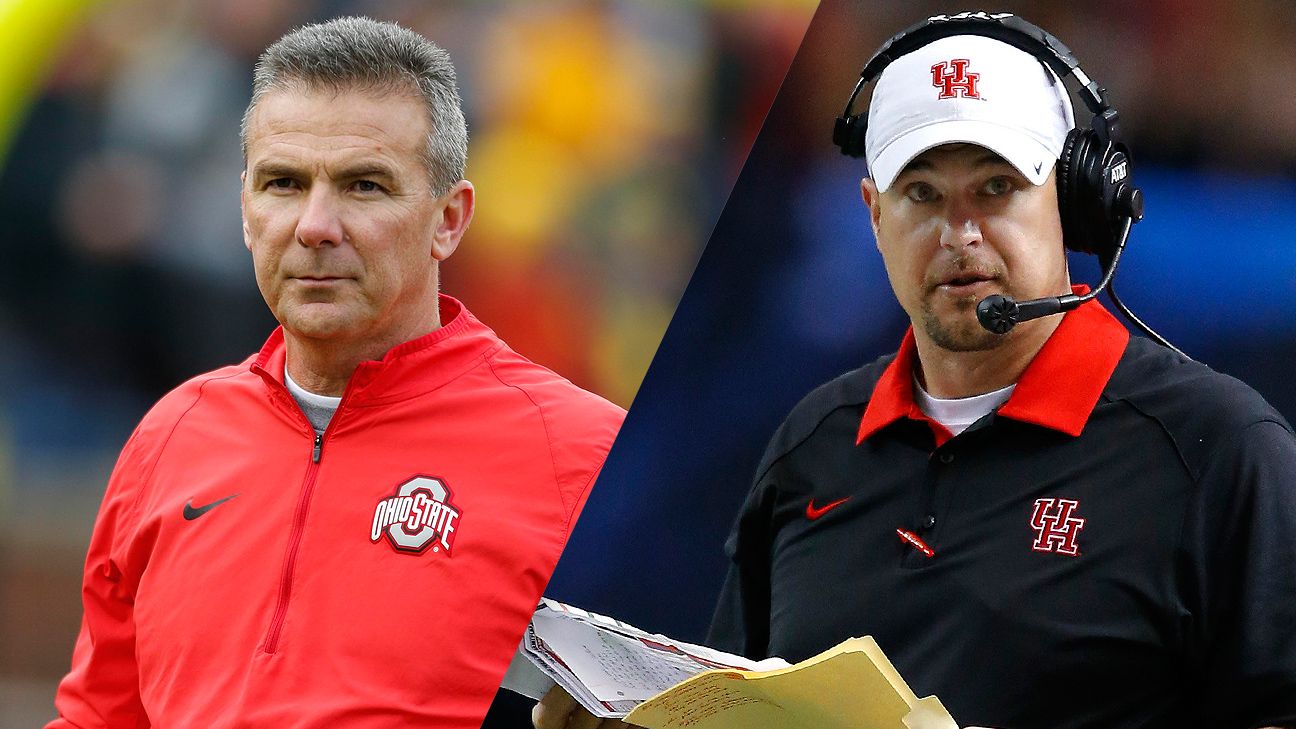 The ultimate College Football Playoff debate: best vs. most deserving

Should a Power 5 team with one or two losses be ranked ahead of an undefeated Group of 5 team? It all depends on how you view best vs. most deserving.

“If they played our schedule, that 12-0 record would be 7-5 and vice versa,” said Holgorsen. “I think strength of schedule is incredibly important. If you say that’s not fair to the non-Power 5, then I’d say well then tell that non-Power 5 to do specific things to be in the Power 5. Because each and every one of them would jump at that opportunity in a heartbeat. It’s not our fault being in the Power 5 they’re not, and they may have a really good football team, but I’m sorry, you don’t play the schedule that we play, and I don’t think you would be undefeated if you played our schedule. If it hurts their feelings, well, I’m sorry.”

One of these 2 things need to happen.

Consolidate the 10 conferences to 8. Then have all 8 conference champions play each other in a tournament. (Pipe dream)

Separate P5 and G5, Make 4 super conferences and have a 4 team playoff. (in progress)

The current system does not work, mainly because the ultimate goal of ESPN (the puppet master of CFB) is to make the most money, NOT crown the best team.

Number 2 has already been set in motion. More P5 going to 9 conf games. Rumblings of a mandate to only schedule other P5 teams for non conf. ESPN not wanting to secure the financial future of 1 of the conferences.

UH, (BSU, TCU, and Utah before us) can win every single game for the next 5 years, but we know which team they will pick when it comes time to pick between a blue-blood and a “mid-major”.

4 spots for P5+ND. Numbers don’t add up. All these articles by Heather are complete BS.

If it’s all about who can survive the full season grind, then get rid of conference championship games, playoffs, and bowls, and just declare someone a winner. They don’t play enough games compared to the number of teams involved to have an honest sample set. We used to do that, more or less, and people got sick of it.

Now we have playoffs, which favor teams who can get up for a couple of games, and all you have to do is get in. Remember when the Steelers were 9-7 and backed into the playoffs and then won the Super Bowl? Were they the best team of the year? No, but nobody cares because they could win one game when it mattered, and that is the NFL definition of the best team. We’ve introduced a playoff in college, and it will have the same effect.

ESPN also conveniently continues to leave out the fact, and their hand in said fact, of half of FBS playing with 10 times the resources of the other half, and then basically blaming the have-nots for their misfortune. Talk about victim shaming.

I’m in favor of capping conference revenue at $5 million per school distribution. I don’t want ESPN to be the most expensive channel in the lineup by 600%. I don’t want financial barriers to entry for public institutions to field amateur athletics. I don’t want half the division to be able to buy their success and look down on the other half for their inability to do the same. I don’t want coaches to have freedom of movement and make many millions of dollars while the students they coach get a pittance and a degree that is typically worthless to them. I don’t want non-profit government entities to build boondoggle stadiums and throw away surplus cash at $3 million of stickers per year. I don’t want UH to have to beg for the chance to get half pay to play with teams whose fans despise us for unfathomable reasons, just to continue progress toward the mission of being a high quality source of education to all strata of the city of Houston.

Capitalism is great, and that’s what pro sports are for (despite their obvious state sponsored anti trust violations). But college sports is primarily state run, taxpayer funded, non profit, amateur athletics from which 1% will continue in their sport professionally, and 99% will do what they went to school for, and the NCAA doing nothing to support their own mission against the GDP of a South American country being frivolously wasted on the periphery of games played for free is a travesty that should rival the subprime mortgage bubble in the minds of every American who has to live within his or her means.

Then you Dana, advocate our candidacy to be added to the Big 12’’’’’’'so we can play your “hard” schedule.

Dana would be arguing the opposite if he was HC at UH. The gap between P5 and the AAC was not that wide last year but public perception of that opinion differs depending on your perspective. The AAC needs to win a few more OOC games against P5s (including UH going 2-0!) to make sure people keep seeing this trend. Plus, if the conference is going to lose a team (or two or four) to the Big XII, having the AAC as the default choice for the G5 NY6 bowl bid will make picking up replacement teams a little easier.

That has always been the issue, college football has been a sport that tries to crown the best team. That upsets a lot of people because of how hard it is to really figure out who is the best without adding too many playoff games which lowers the likelihood of the best team winning. I’m against a huge playoff because I don’t want a bunch of teams who lost games all season besting another team that day whether it’s luck, injuries, or whatever. On the flip side, when a team goes undefeated there has to be a path to the championship regardless of who they played.

An 8 team playoff with top 5 ranked conference champs and any undefeated teams getting an automatic entry would probably solve everything. The P5 still gets their slots and can even take all 8 most years. The first round can be played at the higher ranked team’s home stadium to reward them for the great regular season. Last year would have been (conference champs in bold):

Only arguments you get are from Florida St and North Carolina fans that they should have been in, but both lost to the conference champ and another team so there is no controversy. Both those teams can still have in the same bowls and get beat there too.

The 2004 crazy year with 5 undefeated teams at the end of the year gets all those teams in plus the only 3 one loss teams. Maybe Utah gets a national championship that year and Urban Meyer stays. Same with 2009 with TCU, Boise St, and Cincy getting in (Boise St finished that year 14-0).

This is exactly why European soccer leagues have relegation and promotion. Tons of teams, popular no matter what. Sure, the few elites will usually still be at the top, but it only takes a three year run of commitment and excellence to rise from the pits and win it all, and all without a playoff.

Not only that, but it will put more eyeballs on TVs watching 1-10 Kansas playing 2-9 Iowa St. to avoid relegation, and 11-0 N. Illinois playing 10-1 Toledo with the winner moving up to the top tier.

As someone who follows European soccer, you are spot on about building a team and rising to the top.

Many teams invest to win trophies and also even putting themselves into debt in order to compete to get promoted to the next league or to stay at the top league.

All it takes is finding the right coach to build with and an administration investing into the team to contend and build for the future.