Seven Houston Cougar Track & Field athletes are set to compete on the biggest stage for their respective countries at three separate National Championship meets this weekend.

Current student-athletes Cameron Burrell, Brian Barraza, Eli Hall and Amere Lattin will be joined by alum LeShon Collins at the USATF National Championships in Sacramento, Calif., while sophomore Mario Burke will enter the Barbados Meet in Waterford, St. Michael, and freshman Brianne Bethel will head to Freeport, Bahamas, to compete in the Bahamas Senior National Championships.

Bethel will also compete in each of the 100- and 200-meter dashes on Friday and Saturday, with the preliminary rounds for each race beginning at 8:15 p.m., and 9:30 p.m., respectively. Bethel ran a career-best 11.40 in the 100 to claim silver at The American Championships, while running 23.47 at the Tom Tellez Invitational to set her 200-meter mark.

Junior Cameron Burrell and alum LeShon Collins will open competition for Houston with the first round of the 100-meter dash at 8:35 p.m., Thursday. Burrell set his top time of 9.93 to break the school record and earn a runner-up finish at the NCAA Outdoor Track & Field Championships earlier this month. Collins, representing Team Perfect Method, ran 10.11 at the Penn Relays in April.

Redshirt senior Brian Barraza joins the action when he competes unattached in the men’s 3,000-meter steeplechase at 7:45 p.m., Friday. Barraza enters with the 15th fastest time in the competition at 8:32.48 which he posted at the J. Fred Duckett Twilight at Rice in just his third attempt at the event.

Sophomore Amere Lattin hits the hurdles for the first time since the NCAA Championships when he competes in the 110-meter hurdles at 1:20 p.m., Saturday. Lattin posted a season-best 13.79 at the Texas Relays earlier this season to reach the qualifying mark.

Junior Eli Hall returns to action when he competes in the first round of the 200-meter dash at 1:48 p.m., Saturday. Hall posted his top wind-legal time of 20.40 in the half-lap race to qualify for the finals of the American Athletic Conference Championships. Hall would go on to run a wind-aided 19.96 to win the event.

SEE IT LIVE
Live action of the 2017 USATF Outdoor Championships will be available for three of the four days of competition. Friday’s action will air on NBCSN from 9:30-11:30 p.m., while NBC will hold coverage of Saturday and Sunday’s competition from 3-5 p.m., each day.

Junior sprinter Cameron Burrell advanced to the semifinals of the USATF Outdoor Championships as the Houston Cougar Men's and Women's Track & Field teams opened up a weekend of competition at three separate national championship meets.

Competing in heat four of the 100-meter dash, Burrell crossed the line in 10.11 to finish fourth in the heat and post the 11th fastest time in the preliminary round. Burrell’s mark advances him to the semifinal round at 7:31 p.m., Friday. The top four athletes from each of the two semifinal races will advance to the final at 10:02 p.m., Friday.

Burrell posted the fourth fastest time among collegiate athletes in the preliminary round and was one of just five NCAA athletes to advance to the next round.

From Barbados: Mario Burke cruises to a heat win in 10.51 to advance to tomorrow's semifinal in the 100-meter dash! #GoCoogs

TO THE FINALS! Cameron Burrell runs 10.19 to punch is ticket to the finals of the 100-meter dash at the @USATF Championships! #GoCoogs

Competing unattached Brian Barraza runs 8:42.95 to finish 18th in the steeple. Incredible effort with only a handful of races under his belt

To put in perspective, Barraza's unattached time would be below the Houston school record in the event.

Not quite what he wanted but nice job @BRazzleDazzle5k making USAs in his first year steepling & putting it out there to run 8:42 in heat https://t.co/3XL7CJYpOm 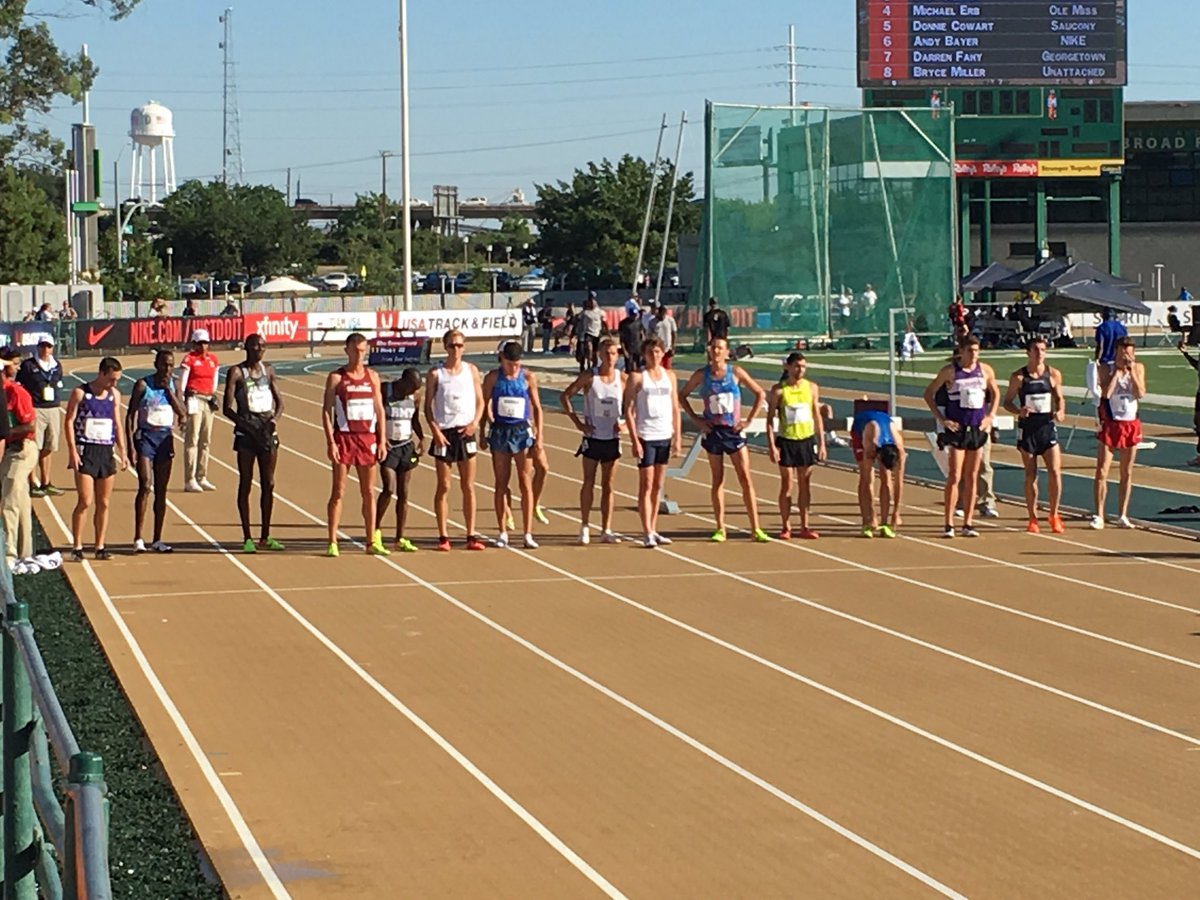 It's tough to fall short of a goal. Just missed making the final in the steeple. Looking forward to some rest then getting back at it for xc

Brianne Bethel qualifies for the finals of the 100 and 200-meter dashes at the Bahamas National Championships! #GoCoogs

STILL TO COME
Houston will have two more athletes competing at the USATF Outdoor Championships including Eli Hall and Amere Lattin.

Lattin hits the hurdles for the first time since the NCAA Championships when he competes in the 110-meter hurdles at 1:20 p.m., Saturday. Lattin posted a season-best 13.79 at the Texas Relays earlier this season to reach the qualifying mark.

Hall returns to action when he competes in the first round of the 200-meter dash at 1:48 p.m., Saturday. Hall posted his top wind-legal time of 20.40 in the half-lap race to qualify for the finals of the American Athletic Conference Championships. Hall would go on to run a wind-aided 19.96 to win the event.

The sprint and hurdle races consist of three rounds each. The top three athletes plus the next four fastest times in the first round advance to the semifinals, where the top four from each semifinal heat advance to the final.

The top three athletes from each final will advance to the IAAF World Championships in August provided they have met the qualifying standard for the world meet.

ON TO THE SEMIS! Amere Lattin qualifies 15th overall after running 13.91 in the prelims of the 110-meter hurdles at #USATFOutdoor #GoCoogs

Eli Hall runs 20.60 to win heat two of the 200-meter dash and earn an automatic qualifier into tomorrow's semifinal! #GoCoogs

Mario Burke is your Barbados National Champion in the 100m dash in an unofficial time of 10.15! #GoCoogs https://t.co/UmzVgV1CHg 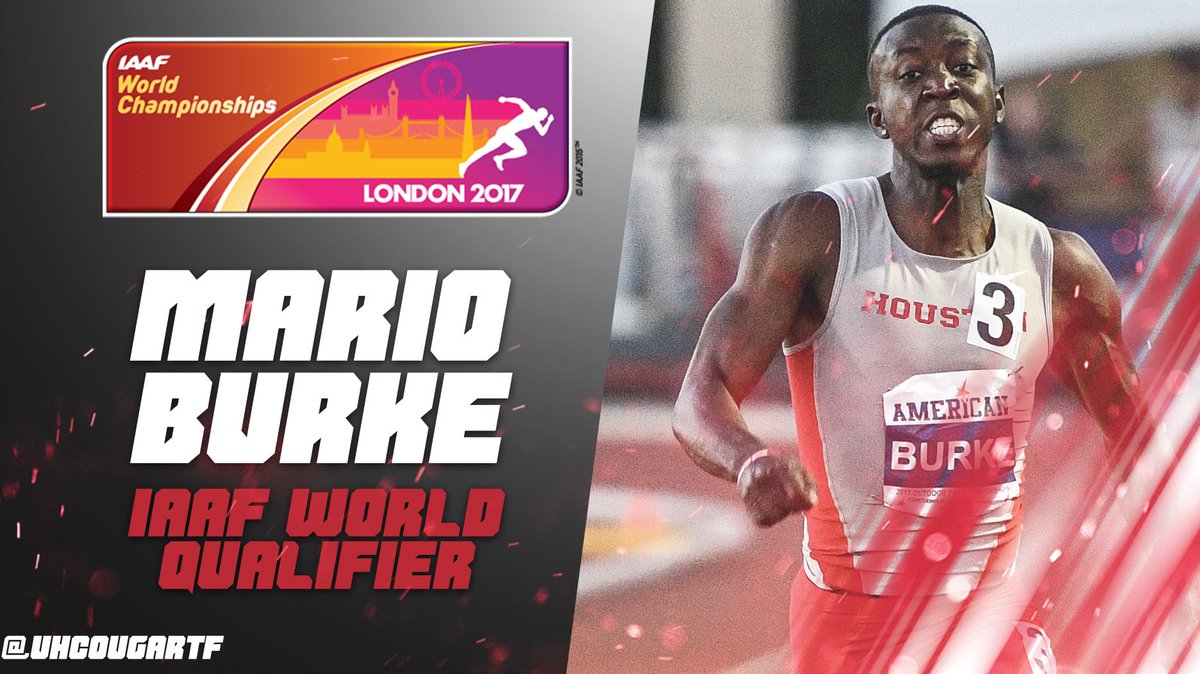 Congratulations. You are on your way to London. twitter.com/UHCougarTF/sta…

Burke books his second trip to London after his 4x1 squad took silver at the IAAF World Relays! #GoCoogs twitter.com/carl_lewis/sta…

Congrats @Burke_Supa! It's all coming together with more to come in London! twitter.com/uhcougartf/sta…

Don't think I ever been this ready..

And your proving it. Keep working! twitter.com/Burke_Supa/sta… With a trip to the IAAF World Championships on the line in the finals, Burke exploded across the line in 10.12 to claim the national championship by a tenth of a second. With the win, Burke punches his second ticket to the world championship meet after being a member of the 4x100-meter relay squad that took silver at the IAAF World Relays earlier this year.

Burke will be back in action at the Barbados National Championships when he competes in the preliminary round of the 200-meter dash at 2:40 p.m. CT, Sunday.

Sophomore Amere Lattin hit the track at the USATF Outdoor Championships on Saturday, competing in the second heat of the 110-meter hurdles. Lattin crossed the finish line in 13.91 to place fourth in the heat and book the 16th best time heading into Sunday’s semifinal race. Lattin will return to action in the semis at 3:04 p.m., CT.

Junior Eli Hall made his return to the track to wrap up Saturday’s action for the Cougars at the USATF Outdoor Championships in the 200-meter dash. Competing in heat two, Hall crossed the line ahead of the competition in 20.60 to post the eighth fastest overall time heading into the semifinals. Hall will return to action at 2 p.m., Sunday with a trip to the finals on the line.

Freshman Brianne Bethel wrapped her competition at the Bahamas National Championship, competing in the final of the 100- and 200-meter dashes. Racing among her nation’s top athletes, Bethel took fifth in the 100 in 11.72 before returning to place sixth in the 200 at 23.85.

Congrats to @KissMyFast_ on a 5th place finish at the Bahamian track and field Nationals!

Amere Lattin runs 14.06 to finish seventh in the first heat of the 110-meter hurdles. #GoCoogs

Eli Hall runs 20.21 to finish third in the 200-meter dash and book his trip to the @IAAF World Championships in London! #GoCoogs https://t.co/Af9nzpL9bi 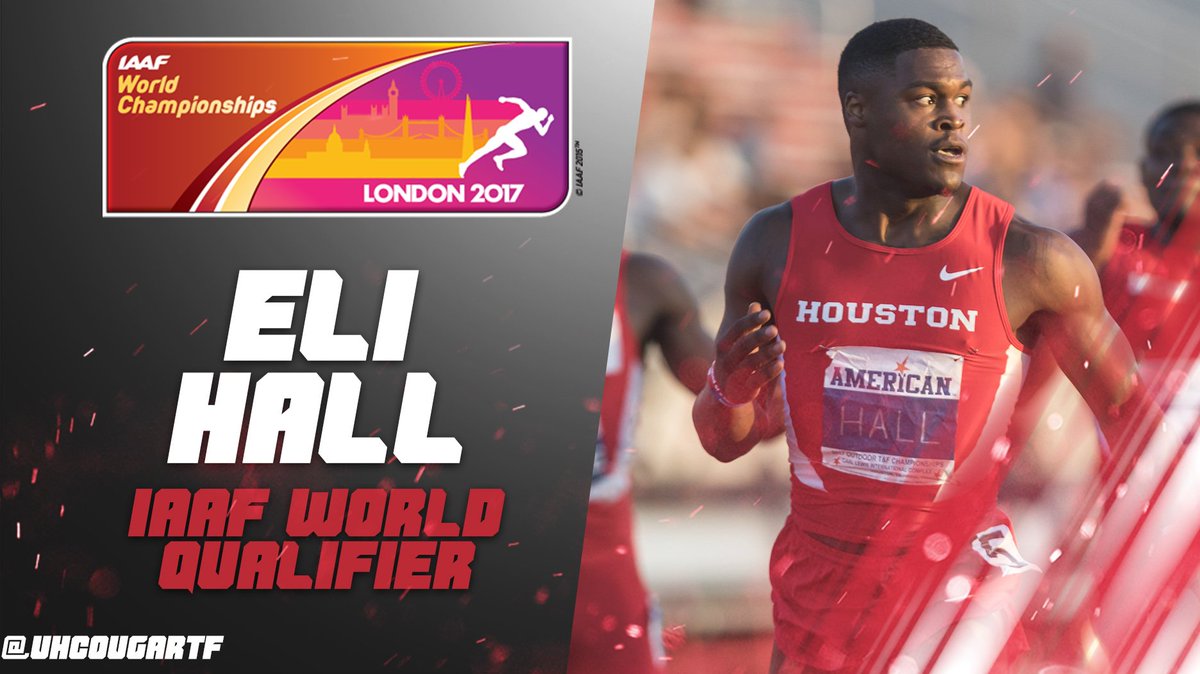 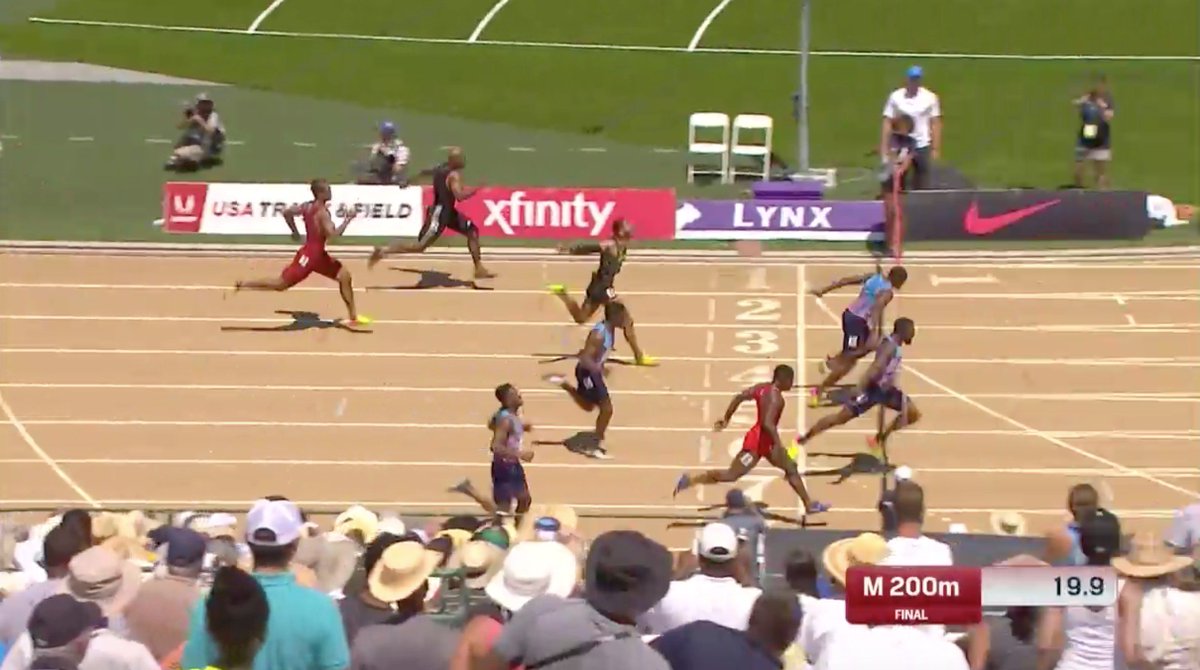 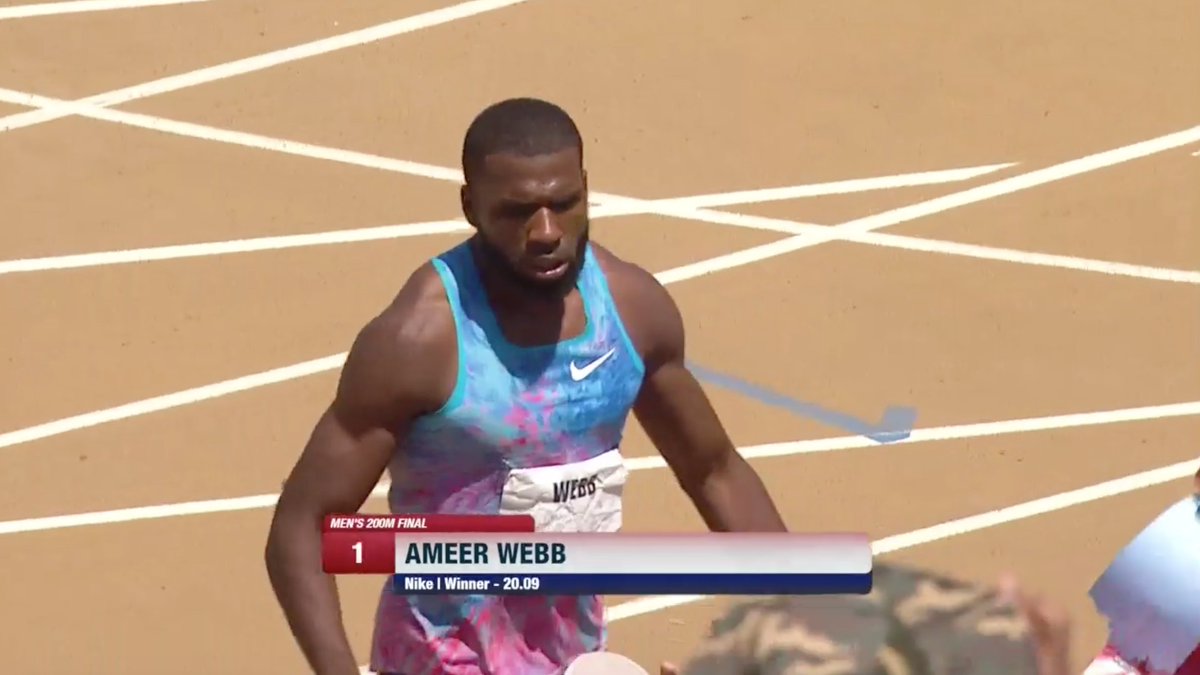 Congratulations to Eli Hall on booking his trip to the @IAAF World Championships in London! #GoCoogs https://t.co/bbG9LaBjHR 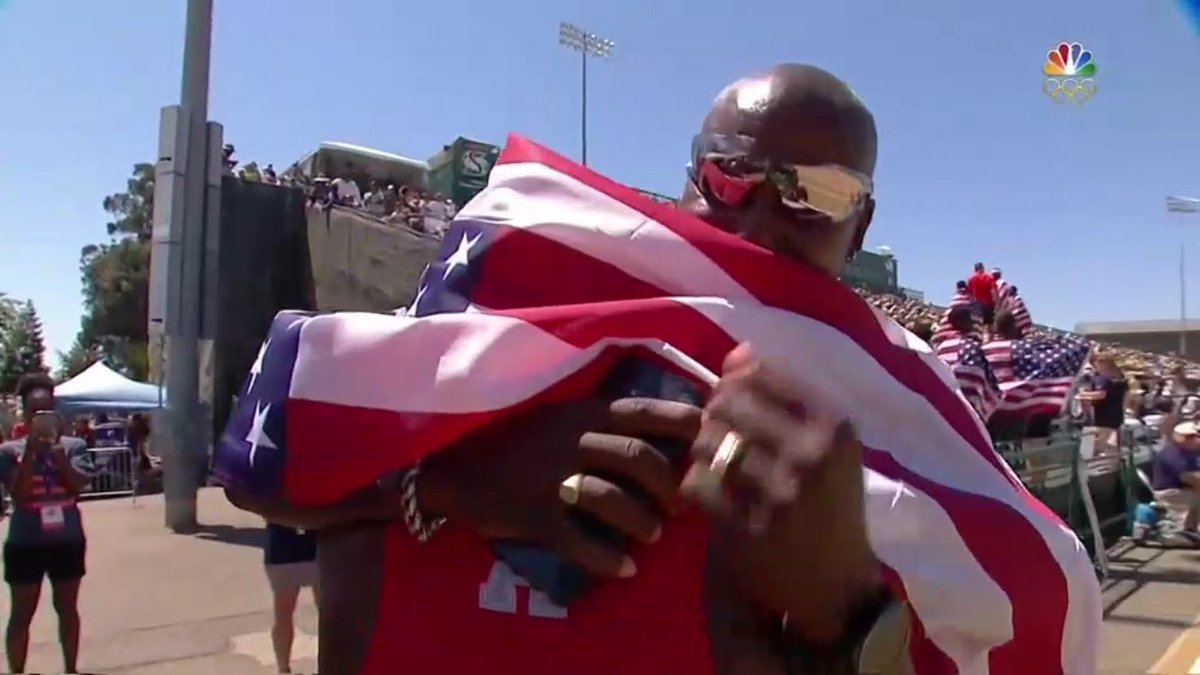 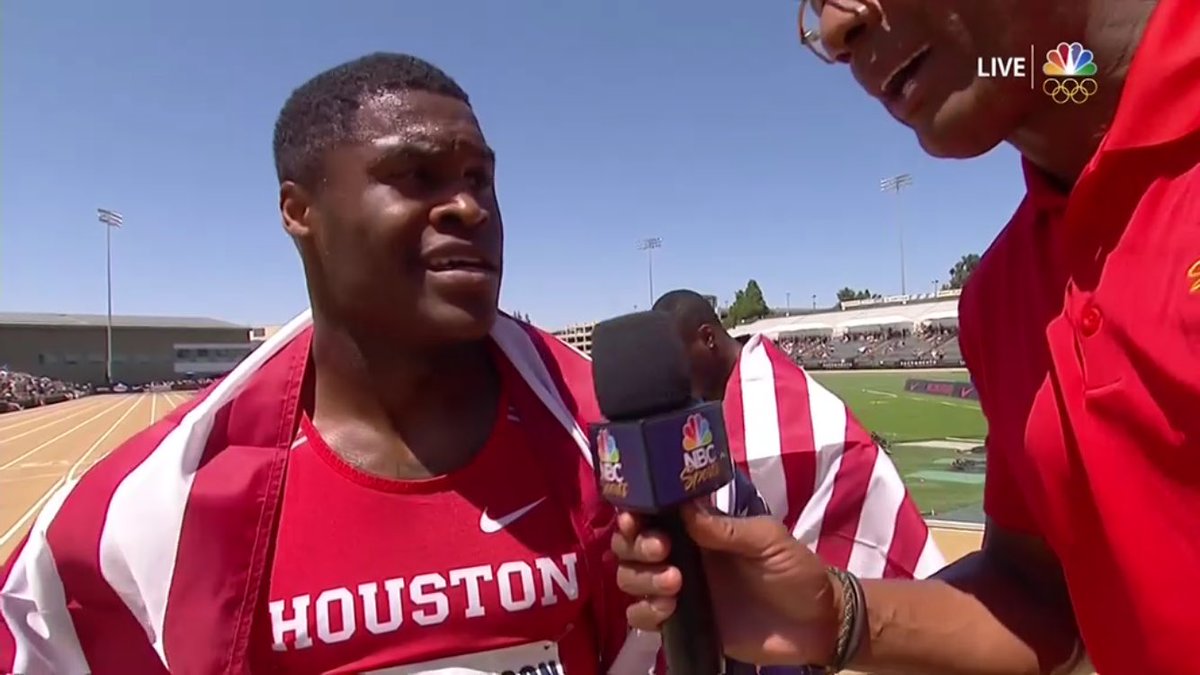 After missing out on both NCAA finals, @EliHall13 has earned his right to represent Team USA @TheDailyCougar twitter.com/uhcougartf/sta…

I am blessed to say I would be representing my country!!!' Thank God!! #Blessed #USA

And now you have some company. Congratulations @EliHall13 for making the US team in the 200. @UHCougarTF will be well represented. twitter.com/Carl_Lewis/sta…

It is amazing how @UHCougarTF sprinters have responded and performed this year. So glad to have ALL of you back. #HTownspeedcity.

@UHCougarTF congrats to all the UH T&F Cougars (5) who have earned a spot on their respective Country's team. #CougarPride #GoCoogs ❤️💯

Congratulations to signee Holland Martin on winning the long jump at the Bahamas National Championships and booking a trip to PanAm Juniors!

Mario Burke runs 20.60 in the 200-meter dash finals at the Barbados National Championships to take the bronze! #GoCoogs 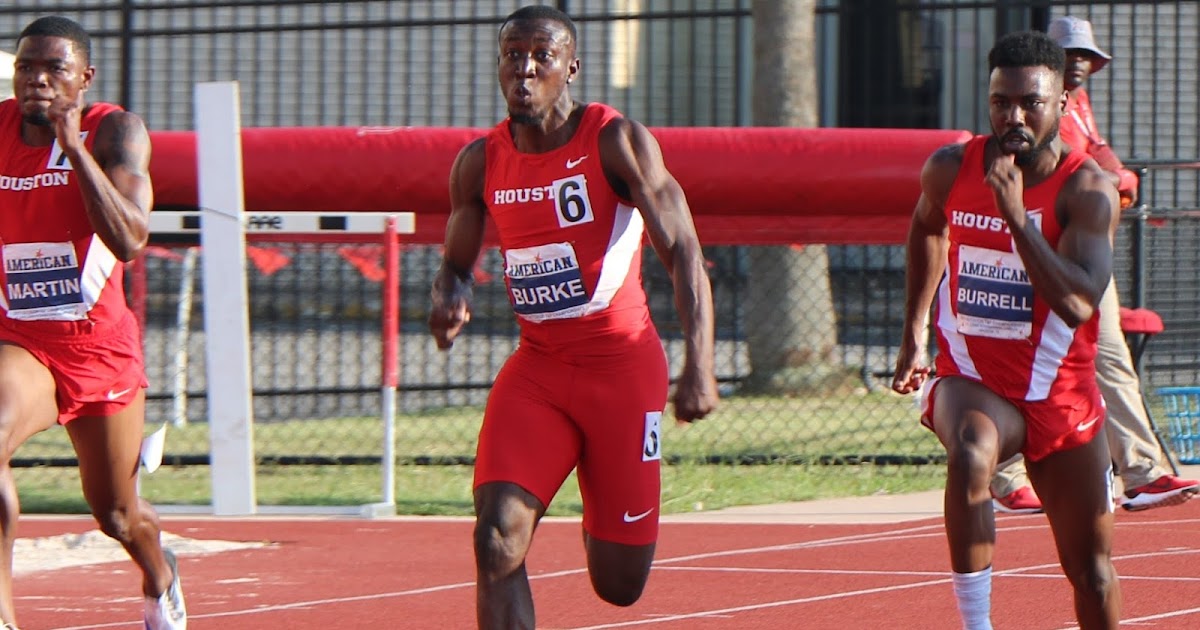 Of the Cougars competing at their respective countries track and field championships this weekend, sophomore Mario Burke and junior Eli... Junior sprinter Eli Hall became the second Houston Cougar Track & Field student-athlete to book an individual berth in the IAAF World Championships with a bronze finish at the USATF National Championships on Sunday. 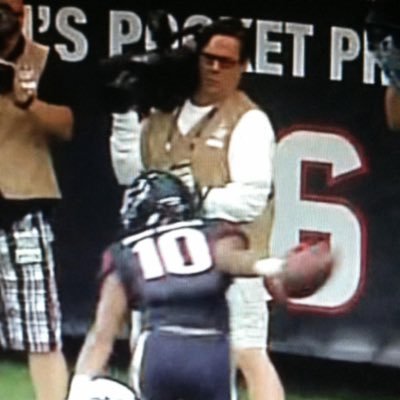 .@UHCougarTF @EliHall13 back from Sacramento, finished 3rd in 200M in the USATF National Outdoor, qualified for Worlds: "I tried not to cry" https://t.co/bnu3gPTbxN

.@Carl_Lewis says @UHCougarTF sprinter @EliHall13 finishing 3rd in 200M and earning a spot on Team USA at Worlds: "It's like the old days." https://t.co/TmB2I7ucpu

.@UHCougarTF sprinter @EliHall13, with head coach @BurrellLeroy, back after finishing 3rd in 200M in USATF Nationals, qualified for Worlds. https://t.co/Pd0HzUTaDY 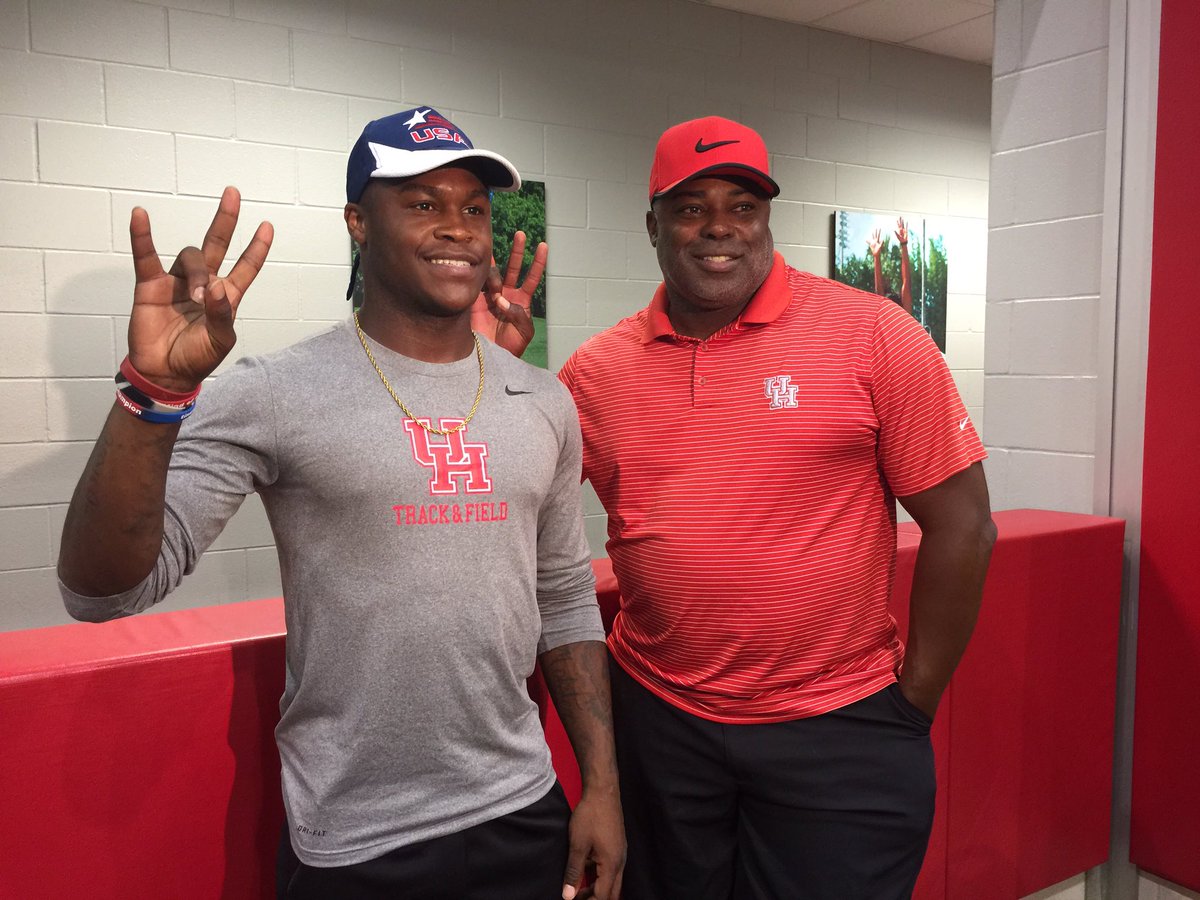 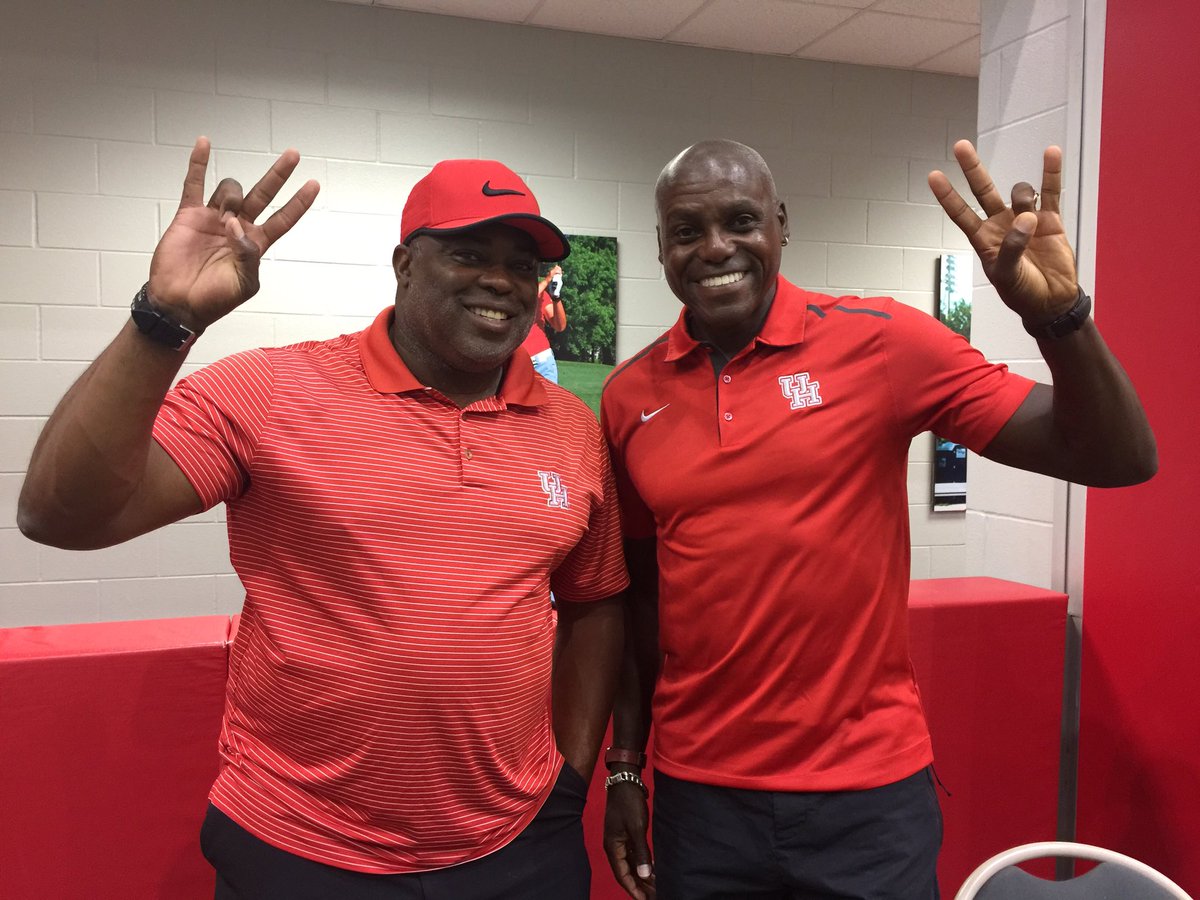