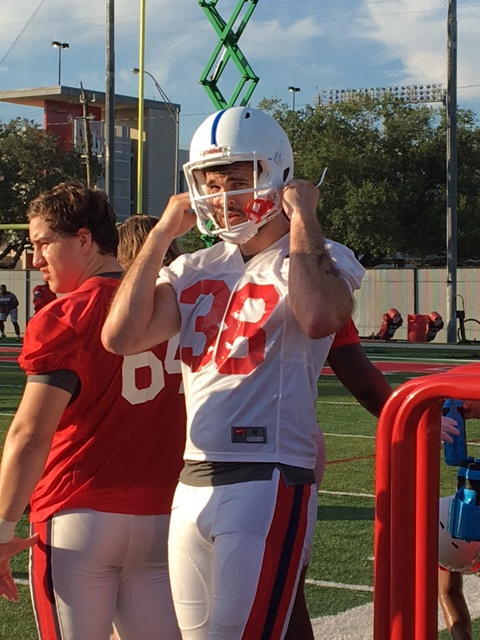 How difficult was his former job. An icecream salesman?

“Hello sir. May I interest you in buying some ice cream…”

Yes I know he will be punting … not kicking goals …

If we’re inside our own 20, I challenge Dane to kick all the goals he wants.

Besides Roy, we’ve added the junior TE from Baylor, Chris Johnson to the roster. He’s a grad transfer so he’s eligible to play immediately and has 2 years remaining.

We also added Tren’Davian Dickson, a frehsman transfer from Baylor. According to Duarte, we’re requesting a waiver to allow him to play this year.

What does it mean that Dane Roy is an “unrecruited walk-on”? Back in April, the Chronicle wrote that UH had offered him a scholarship.

I’m guessing that a scholarship is part of the plan, but it hasn’t officially been offered yet.

I could be wrong, but it may be a similar situation to Dickson. The 2016 class was full, so he came here as a walk on, and is put on scholarship now and counts towards the 2017 class.

In regards to Chris Johnson’s addition, both of these were tweeted out in response to UHCOUGARFB’s welcome announcement for the player:

I know OU-Ohio State is on hyperdrive, but I bet OU-Houston will be more fun. Could be more dangerous for #Sooners. twitter.com/UHCougarFB/sta…
UHEEALUM August 4, 2016, 7:14pm #9

The article is pretty clear about the stipulations regarding the designation. You may want to read it entirely.

I have read the original article and the April article very carefully. Today’s article describes Roy as a non-recruited athlete. April’s article reports that Roy had been offered a scholarship. The issue, UHEEALUM, is that I cannot reconcile the two articles. How can Roy be non-recruited if he is a scholarship athlete? My conclusion is that offering Roy a scholarship has always been part of the plan, but there has been no official scholarship offer to date.

I’ve been rooting around and think I understand what happened here:

Roy got what he wanted. In addition, as a non-recruited football player, he faces fewer restrictions if he decides to transfer. I’m not saying that Roy is even thinking about that, but at the margin, this is a benefit for Roy to be a non-recruited player

So why would CTH voluntarily accept the contact restrictions to ensure that Roy remained a non-recruited player? First, I’m not sure how much of a burden the contact restrictions were. Living in Australia, Roy was likely not available for recruiting calls during coaching staff work hours. Email was probably more convenient for both sides. But I think that the bigger issue relates to the scholarship. Roy can not have an athletic scholarship and be a non-recruited player. But it was reported that Roy has a scholarship. It must be a non-athletic scholarship (i.e. an academic or other kind of scholarship). Even if Roy had a non-athletic scholarship, he would be counted toward the 85-scholarship limit if the coaches’ contact caused Roy to be a recruited athlete. CTH and team specifically avoided the kind of contact with Roy that would trigger Roy being defined as a recruited athlete. I’m guessing that the reason is that Roy earned a non-athletic scholarship (still got the scholly he wanted), and CTH got a good player that doesn’t count toward the 85-scholarship limit. It takes a strange set of circumstances to make this kind of thing to happen. I think CTH recognized he had that set of circumstances and took advantage of it.

Don’t be a dick

The guy is wanting to start a conversation about NCAA infractions committed by our coaching staff without appearing like the troll he is. The article is quite clear on what the rules are concerning the designation, and most literate folks that took the time to read it understand that.

Yeah, this is the kind of tone we don’t want here on Coogfans. So please try to refrain from the snark. This is a community and we all want the same thing which are championships and a team we can be proud of.

You can disagree without being disagreeable.

Please read the Coogfans rules. Is it the truth? Is it fair to all concerned? Will it build goodwill and better friendships? Will it be beneficial to all concerned? Simple and Direct. Please feel free to contact if you have any questions. If break the rules then you will be warned. Second Offense you will be given a 30 day ban. Third Offense you will be banned permanently and which can be reviewed by the Coogfans admins. Other rules: Please don't cut and paste content from other si…

Yeah, this is the kind of tone we don’t want here on Coogfans. So please try to refrain from the snark