What’s the vibe on Fall golf

Somebody give me some good news

We tied for second this week at the Bluejack Invitational. Unfortunately, it was only a 2 team tournament against Sam Houston State. I didn’t understand the scoring system, but here are the results.

I wish I could shoot 150 over two rounds.

Looked rough after our first tourney last month. Looking forward to seeing what we can do this year.

See my post under Lady Coogs. They did well at the Schooner tournament. Finished 3rd overall and had the low team score on day two.

Edit - actually finished 4th. TCU had a monster 3rd round to move in to 2nd…

A big positive is the transfer Santiago De La Fuente.

Apologies for the lack of preview and write up. I’ve been busy as of late.

Coogs finished 5th (out of 23) in their first event at La Tech. Had a great first and final round, but the second round killed them. Overall, shot -10 in the first event and notched a bunch of wins which will help later on in the season.

The event with SHSU was a one day deal (likely because both schedules were set and they had a competition day left). I wouldn’t read too much into that.

Coogs tee off today at the Trinity Forest Invitational hosted by SMU. Coogs have some good players this year, including some transfers.

ThreeAmigos - Do you know why we don’t have the Three Amigos golf tournament anymore ?

After two rounds at the Trinity in Dallas. Not horrible but definitely not where we should be. What does stand out is that the SMU “B” team is tied with us and their “A” team is 9 up. Granted it’s in Dallas, but still disheartening. Hopefully tomorrow we will move up.

I’ve played 10 rounds at Trinity Forest and it’s super janky. It’s not hard off the tee, but coming into greens it’s brutal. So many slopes and ridges to deal with. I’ve hit greens out there and it’s an auto 3 putt - no chance to get the first putt inside 10 ft.

It makes sense that SMU B-team would be playing well. They play TF every single day. We also beat SMU in the first event we played this season, for whatever that’s worth.

Coogs playing okay this week. Have 3 guys inside the top 20 at the moment. Challenge is the other 2 are outside of the top 50. A good final round and the Coogs can maybe sneak out a top 3.

Coogs shoot -9 in final round. -14 overall. Good enough for a 6th place finish.

De La Fuente is a baller. Final round 67 out of him to finish T12. Great last two rounds out of Reilly after a rough first round.

*Yall - this is fall golf. You can’t win conference right now - it’s still 9 months away. You can pad your W/L record to help for regionals. Coogs have finished both tournaments under par as a team. Not a great start to the fall. Not a bad start.

Agree with your assessment. While an indicator, not the finished product. However, I do think after this Spring, a lot of questions about the program will be answered, one way or the other. Hoping for the positives! 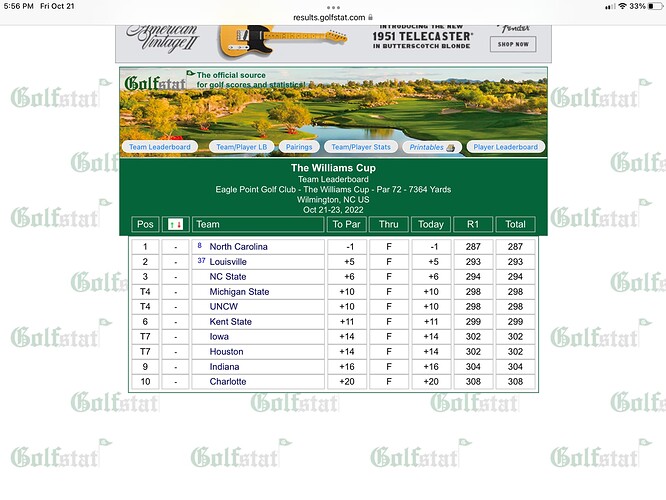 Damn. Only one school under par but +14 on day one 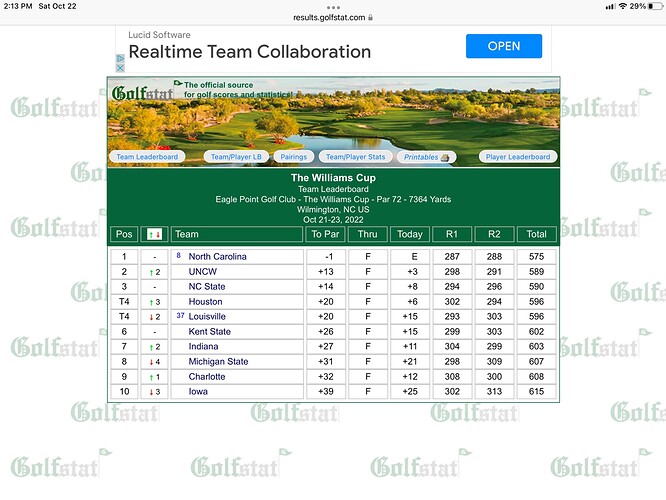