What was going to UH like in the 90s?

That’s an era rarely talked about on here. I was in elementary school then so obviously college wasn’t on my mind.

My cousin went in the late 90s but I rather ask on here than ask her directly.

I was at UH btwn 88-92, and campus was way different than the behemoth it is today. Very few students lived on campus, the food and cafe options were terrible by today’s standards.

I spent a lot of time in the Satellite when I was an underclassman, the Honors College basement, Melcher Hall and the UC underground btwn the UC and Melcher. The old dorms I haunted have been torn down and rebuilt, thankfully.

I was there during the Run and Shoot era and that was great, but the college football atmosphere wasn’t the best in the Astrodome (I did enjoy the AC). Hofheinz wasn’t a super venue either, but it had history and games there were fun to attend.

Rother’s Bookstore across from Melcher was where you went for good UH gear (The Bookstore wasn’t that good). China Star had cheap food and it was alright (for a college kid). And I like going to Coogs Cafe and grab a few beers while bowling at the bottom floor of the UC. I also remember there was one guy that would always sing out loud as he walked between classes . I tended to see him mostly btwn MDA Library and the PGH.

Finally, the lines at the registrars office were way too long when you were signing up for classes.

UH is a much different campus today, a much better and more active campus.

I got my BBA in 88 and was on campus nights for my MBA until 93….I had a year break in 89
Lived in Taub and the towers….in those days you could open the windows on the top of the towers and actually get outside on the little balcony.
I too frequented the honors lounge in the basement….jealous of today’s honors college facilities.

we played frisbee golf on campus alot, we had an outdoor pool next to the quad…the south african girls from the swim team would sunbathe topless ……
had alot of itza pizza , frenchies. it was a great time for cougar football with the run and shoot era.
basketball was still good as well but not phi slamma jamma great.

there were less buildings and things like escalators and elevators seemed to be out of order frequently.
Melcher hall was brand new and a huge upgrade in facilities experience.

Even though it was old, I enjoyed my time in Taub hall. My daughter actually lived there her first semester across from my first dorm room at UH. 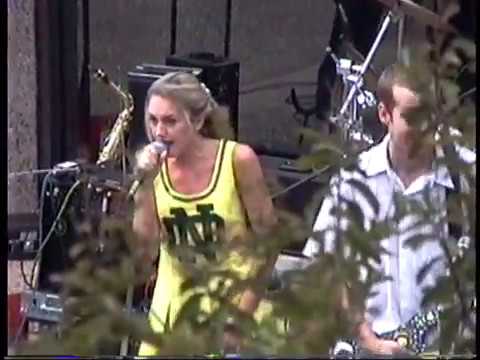 It doesn’t get any more 90s than this

Except for the fact that she wears a uniform with ND on it.

UH in the 90s was no where near where we are now. Dorms were at 4K, no great on campus stadium, no tier 1, no medical school, no light rail, no p5.

UH is way better now than those days.

The number of on campus students was far lower in those days and our football and basketball programs were at all-time low points under Brooks and Helton.

However, the experimental games at Robertson created a demand for on campus football, and more campus life, which has led us to where we are today. I was hoping that we’d make even more progress in that regard, but John Whitmire seems to have blocked that.

The reason you don’t hear much about that era is because, as I said, those were LOW points in UH football and basketball.

Fortunately, we bounced back!

Welcome to another installment of our still-unnamed, in-their-own-words series on musical goings-on in Houston that perhaps could have turned out better for some of the parties involved - coming soon: Riot at Mott the Hoople! - but probably couldn't...