American going all in on Power 6 push

American going all in on Power 6 push

The American is going all-out in its argument to join the SEC, ACC, Big Ten, Big 12 and Pac-12.

“The football in the American is good, but, still, it’s hard to argue the AAC is on par with the Power 5 when a third of the conference has watched its coaching roster leave for Power 5 jobs in the past two years. The American, through new hashtags and logos, is going to make that argument.”

If The American was P6 then some of those coaches would not have left. That being said, Judas would have gone to Texas under any conditions as that was his ultimate goal.

If they were serious about wanting to be power 6, they should have stopped short of adding SMU, ECU, UConn (football) and Tulane.

"The football in the American is good, but, still, it’s hard to argue the AAC is on par with the Power 5 when a third of the conference has watched its coaching roster leave for Power 5 jobs in the past two years

Meanwhile TT continues to fail with no one taking their coaches. No one takes ISUs coaches but they are usually terrible

The immediate purpose of the push is to put the AAC above the other G5 conferences in the eyes of the media, not to put them on the same level as the other P5’s. The P5 push will come later.

So far, it seems to be working as most articles do say that the AAC is the best of the rest. The committee also seems to believe the hype as Navy came close to moving ahead of Western Michigan last year for the NY6 slot even with two losses.

But using coaches leaving as a measuring stick is like focusing on your arm hurting during a heart attack. Of course they leave when they get more money and resources; that’s a symptom of the overall issue.

If they were serious about wanting to be power 6, they should have stopped short of adding SMU, ECU, UConn (football) and Tulane.

SMU got us coverage in one of the largest media markets in the country (and the DMN does cover them).

UCONN wouldn’t have come without adding their football program. The conference gets solid coverage in the northeast because of them and their basketball program is still a brand.

I agree with ECU and Tulane and I’d add Tulsa to that mix. Tulane made sense if we housed the basketball tourney there or used the Superfome for the Championship game in football, but neither has happened or is in the plans. ECU gets good attendance, but not much else. Tulsa has success, but is such a tiny fanbase. Think the conference pushed too fast for that conference championship game instead of waiting to see what happened with others.

Unfortunately, I think there is a better chance of P4 than P6 but i don’t mind the marketing. The Big XII will be interesting to watch this year:

If OU and UT struggle in their transition, are TCU and Ok State the flagship programs? The AAC needs to make some noise in OOC this season. 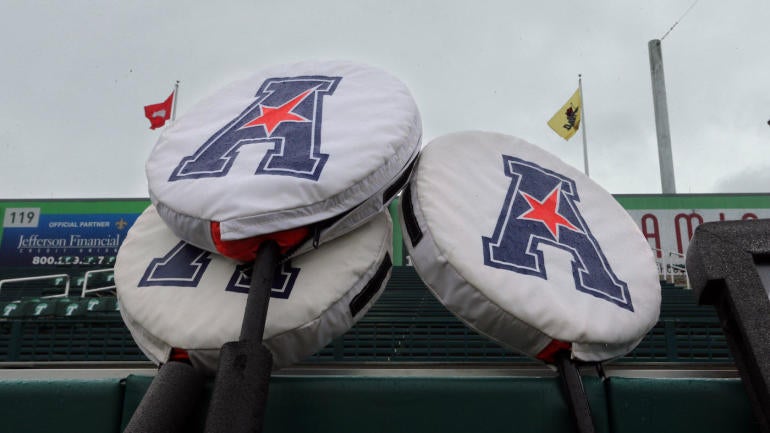 Why the AAC's push to make itself part of the Power Five matters in college...

It has every right and every reason to exploit that, because perception matters for Group of Five programs.

It’s the same reason SEC fans chanted “S-E-C” at the top of their lungs during the BCS era. College football is a beauty contest. Instead of a playoff spot, the AAC is hoping that the perception it creates by championing itself as the most powerful Group of Five conference will help its champion earn that benefit of the doubt when the selection committee places teams in bowl games and gives its top-ranked Group of Five team a spot in the vaunted New Year’s Six.

The message from the American Conference is that it is closer to the Power Five right now than it is to the Group of Five.

Think about the potential impact. The American sells itself as a peer of the Power Five. The polls then reflect this gap, both in the preseason, with its trickle-down effect on resulting polls, and to cap the regular season. In turn, the Playoff selection committee views the American’s best as a rung above its non-major peers; for the remainder of the four-team format, the conference has the inside track for an access-bowl invite.

There will likely be no movement toward a new postseason scheme for the foreseeable future. But by presenting itself as the class of the Group of Five, the American is in position to claim that seat at the table when the opportunity does arise — if the league takes care of business on the field. 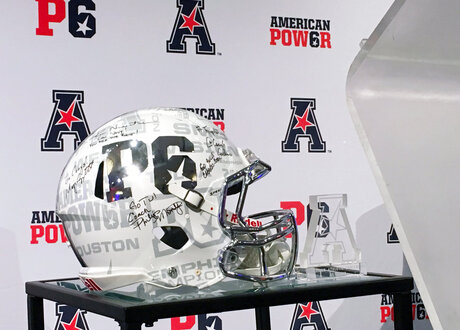 NEWPORT, R.I. (AP) — On the strength of rising-star coaches such as Justin Fuente, Tom Herman, Matt Rhule and Willie Taggart, the American Athletic Conference has positioned itself to at least make the case that it…

Aresco’s dream of a true P6 seems unlikely to ever come to fruition, but if coaches like Morris, Montgomery, Norvell, Frost, Collins and Applewhite can be as successful as Herman, Rhule, Taggart and Fuente, the future of the American has a chance to be more lucrative.

This Power 6 push at least has the media talking about our league and our teams. Even if most say we’re not quite there yet, it is still positive mentions that people read that may make them tune in.

It’s all about the money. The only difference between P5 and G5 is the tv money. That money brings sustainability

$2M vs $14/$16M for a bowl game and going higher every year in one direction. Which one would you took? That is why the P5’s will never accept another conference to join them. That is also why the P5 was created in the first place. Hence for our push to join a P5. 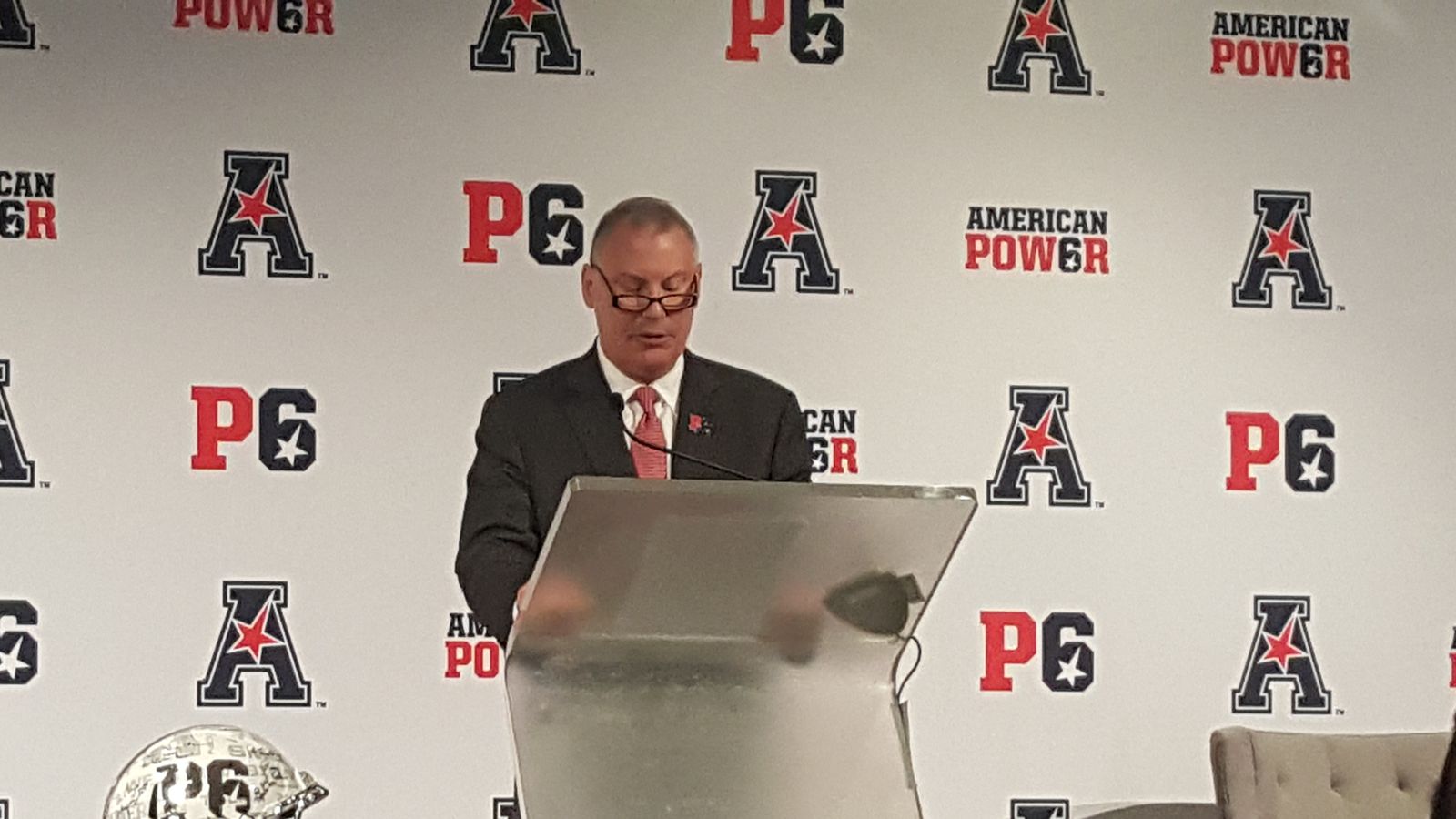 Yes, many laugh at the #AMERICANPOW6R branding. But it's not intended to show equality: just separation.

But that doesn’t hide the facts on the ground, and Aresco is realistic about those as well. He knows the league’s lineup of bowls isn’t good enough at present, and now even worse with the folding of the conference-owned Miami Beach Bowl after just three editions. He also knows that a guaranteed spot in a New-Year’s-6-or-whatever-that-becomes is critical to making P6 more tenable.

“It’s really critical we create the perception that we are a P6 so when (the CFP Playoff) either gets renegotiated or an extension is negotiated, and that’ll happen before the 12 years are up (the ESPN contract ends in 2025), that we’ve gotta get in it. That we’ve got to have a contract bowl. By then we’ve got to prove that we deserve it.”

“Our best team is going to struggle to be on New Year’s Day only because our league is so good. You know they’re going to lose some games, and unfortunately someone in another league that might not be as strong as ours might slip through undefeated or with one loss.”

“Last year, we had a couple teams that were probably as good as anybody in the Group of Five. We were 20-2 against those conferences during the season last year.”

We were 20-2 against those conferences during the season last year.”

I did not know that, but wow!

I’m also glad that the AAC is making a push for inclusion and promoting itself. Mike Aresco has a good case to make on behalf of the AAC primarily due to a core group of schools committed to infrastructure and winning against P5 programs and winning bowl games.

It should also be noted however, that those core programs made those commitments and investments in order to move up and out of the AAC, but since that avenue seems to be closed for the foreseeable future, the AAC has certainly benefited and is using those returns to make a case for the conference. That’s good.

Aresco has had a tough job to move this conference forward - especially after the total chaos that created it years ago. I still believe that Tulane and Tulsa were pure panic moves, two tiny schools that have virtually no sports relevance whatsoever and should probably be members of the Sun Belt Conference.

Overall, I think the AAC marketing effort can succeed if UH, USF, UCF, Cincy, Memphis and Navy continue to be relevant, win the P5 games on their schedules and grab that NY6 Bowl date on a regular basis. I honestly don’t think the AAC will be a P6, but it has a slim chance of becoming an official buffer conference that gets paid far less than the P5 schools, but far more than the other G4 conference programs.

I am glad the AAC is thinking ahead progressively…but the bottom line is all about big bucks, and that is what separates the haves and have nots. UH would bolt to the Big 12 in a split second if offered. So would anyone else in the AAC.
We need to take care of business on the field, pack stadiums, win OOC games and step up in bowl games…

I agree with you, but its not that simple when our coaches keep getting poached by the bigger conferences.