I’ll be the first to say, I love our University and I am beyond elated that our athletics department will be getting a bigger payday with our move to the Big 12.

Our program will finally be on a level playing field compared to the other Big 12, Pac 12, & ACC Schools.

While we’ll still be behind the Big 10 & SEC, this does not mean we can’t compete with those conferences at the highest level and churn out winning teams.

Sure, at this point in time we’ll never get the horde of 5

recruits that A&M, UT, or Alabama gets… but we can still compete and beat them with the talent pool available in this great city & state.

Which brings me to the title of this post… analytics & UH Athletics (Mainly Football & Basketball).

Many people oppose or even hate analytics saying it is ruining the sport, and causing games to be predetermined by computers rather than the eye test. I’ll go so far as to say this is a foolish thought and our athletics department should be embracing analytics to find inefficiencies in the recruiting & transfer market, and capitalize on them to build a winning and sustained culture.

There’s so much talent in this great city and state that gets overlooked. And I feel we’re going the wrong way in our recruiting & transfers, we’re going for size and players that “look like big 12 players” according to Dana when that is an outdated way of building a team.

Look at the Astros organization for example. An organization that loses multiple General Managers, Players, & a Head Coach still continues to win and dominate. Why? They are at the forefront of analytics in their respective sport and have their organization perfected to where players & staff can come and go but they continue to dominate and win championships.

the days of hiring a coach and letting them create their own team and control the offensive, defensive, and player personnel is the old way of playing this game. Our athletics department should have an identity pre-determined on the type of offense, defense, and style of play our team should play and From there, then we hire head coaches who fit our identity and allow them to control the culture and way of play. Both the AD office and Coach should be aligned and have a similar goal. That is not happening now, this is all Dana’s show.

Kelvin Sampson is a great example of this. He has not only revived UH Basketball, but adapted his style of play to what the dada is telling him. He’s a one of a kind coach who you give the keys to the program, and let him do his thing. He build the foundation of not only the basketball team, but the operations department as a whole.

Dana is not that guy. And if it weren’t for his ridiculous contract, he should’ve been gone yesterday because his play style is ancient & anemic. While all the numbers and data point to high powered offenses dependent on a pass heavy attack with a running QB, Dana is still playing football like it’s 2009 attempting to turn his QB into a pure pocket passer while primarily rushing the ball.

When we enter the Big 12, we will immediately be at a disadvantage because of the money & level of recruiting our future conference mates have had over us for the past 2-3 decades.

Instead of trying to build how they build, which is not sustainable, we should rebuild efficiently and have our Athletic Department incorporate and hire data analysts to show how we should be a team in this modern age, and how we can find local inefficiencies in the transfer & recruiting market (players) that may have been overlooked but could have huge impacts on the modern CFB landscape & playstyle.

I find this statement to be very interesting, especially after watching the running QB of Texas Tech win the Texas Bowl and also be its MVP. He ran for over 100 yards.

In the CFP final four OSU and TCU have QB’s who can run. Michigan and Georgia less so.

You are preaching to the choir on this Forum by mentioning,and criticizing , Dana and his Offense.

The greatest era of UH Football was 1966-1984 when Coach Yeoman ran The Houston Veer, which he invented. A running QB.

This should be of interest to our Administration. It is highly likely Dana will be mediocre next season and action then will be taken.

Analytics will tell you Coach Sampson is a unicorn so I don’t think he should be your example. He also is a couple years ahead of Dana on facilities and having a program winning at the high level.

As to recruiting, we may sign our best class in a long time. It may not be top 25, but we still need to catch up on facilities. The coaches found both Marcus Jones and Damarion Williams who were both undersized cornerbacks that now play in the NFL. I believe Dana’s comments are about size and depth in the trenches. He coached in the Big 12 and Coach Belk coached at Alabama so both didn’t just forget what they need to win. Most of the guys who have transferred to date were guys not getting much playing time.

I find this statement to be very interesting, especially after watching the running QB of Texas Tech win the Texas Bowl and also be its MVP. He ran for over 100 yards.

In the CFP final four OSU and TCU have QB’s who can run. Michigan and Georgia less so.

You are preaching to the choir on this Forum by mentioning,and criticizing , Dana and his Offense.

The greatest era of UH Football was 1966-1984 when Coach Yeoman ran The Houston Veer, which he invented. A running QB.

This should be of interest to our Administration. It is highly likely Dana will be mediocre next season and action then will be taken.

What are you taking about?

I rest my case.

And Stroud is averaging 6 rushing yards per game.

You’ve been on this for awhile and I’m not completely sure whether or not this is just trolling.

I wonder when Moneyball will cycle off of Netflix.

UH football does use some degree of analytics. Remember CDH justified going on offense in OT because of analytics. What we don’t know is how extensive UH uses analytics.

Holgi used analytics to determine that they should take the ball first in OT after winning the toss. We are definitely NOT using analytics properly.

Dana said “the analytics” said the team that gets the ball first usually wins, but I’m not confident he necessarily meant that we have an in-house analytics department that made that determination. Since moneyball came out, “the analytics” can mean a bunch of things – maybe we do have an in-house analytics department. Maybe someone who has one mentioned it to him. Or maybe he saw a blog post that he liked. Could really be anything.

I also think there’s an upper bound on how effective actual analytics can be in college sports – so much of college coaching is based on figuring out how a 16 or 17 year old is going to play in a few years, and getting him or her to do that, and much of that is determined by factors that analytics can’t really capture. Even with the way analytics has revolutionized MLB, their draft is largely a crap shoot, despite being a much more predictable sport.

I think the biggest area where the Coogs (and college football as a whole) have room for improvement is in terms of game theory; it seems to me that a lot of coaches just sort of do what they’ve learned to do, without any sort of idea why they’re doing it. Getting a coach to investigate why they’re making the decisions they are would be a big step forward.

While all the numbers and data point to high powered offenses dependent on a pass heavy attack with a running QB, Dana is still playing football like it’s 2009 attempting to turn his QB into a pure pocket passer while primarily rushing the ball.

What are all the numbers and data you are referencing? I just spent 5 minutes looking into this and only 4 QBs whose teams were in the final 25 of the CFP had more rushing yards than Tune. One of those was Frank Harris whose team we beat on the road and who was less than 40 rushing yards ahead of Tune in any event. UTSA also won’t be ranked in the final polls.

How many hands does it take to catch a football?

The true identity of Purple Jacket Man is finally revealed.

Your last paragraph is what I believe a true CEO would be looking at in order to gain some advantage against programs that are a 2-3 decades ahead.

Sadly, I don’t believe the current HC (who wants to transition to “more of a CEO”) has that kind of foresight.

Tony Levine researched and determined the number of turnovers was the most decisive metric in winning. It would have been interesting to see how that might have worked out over a period of years. 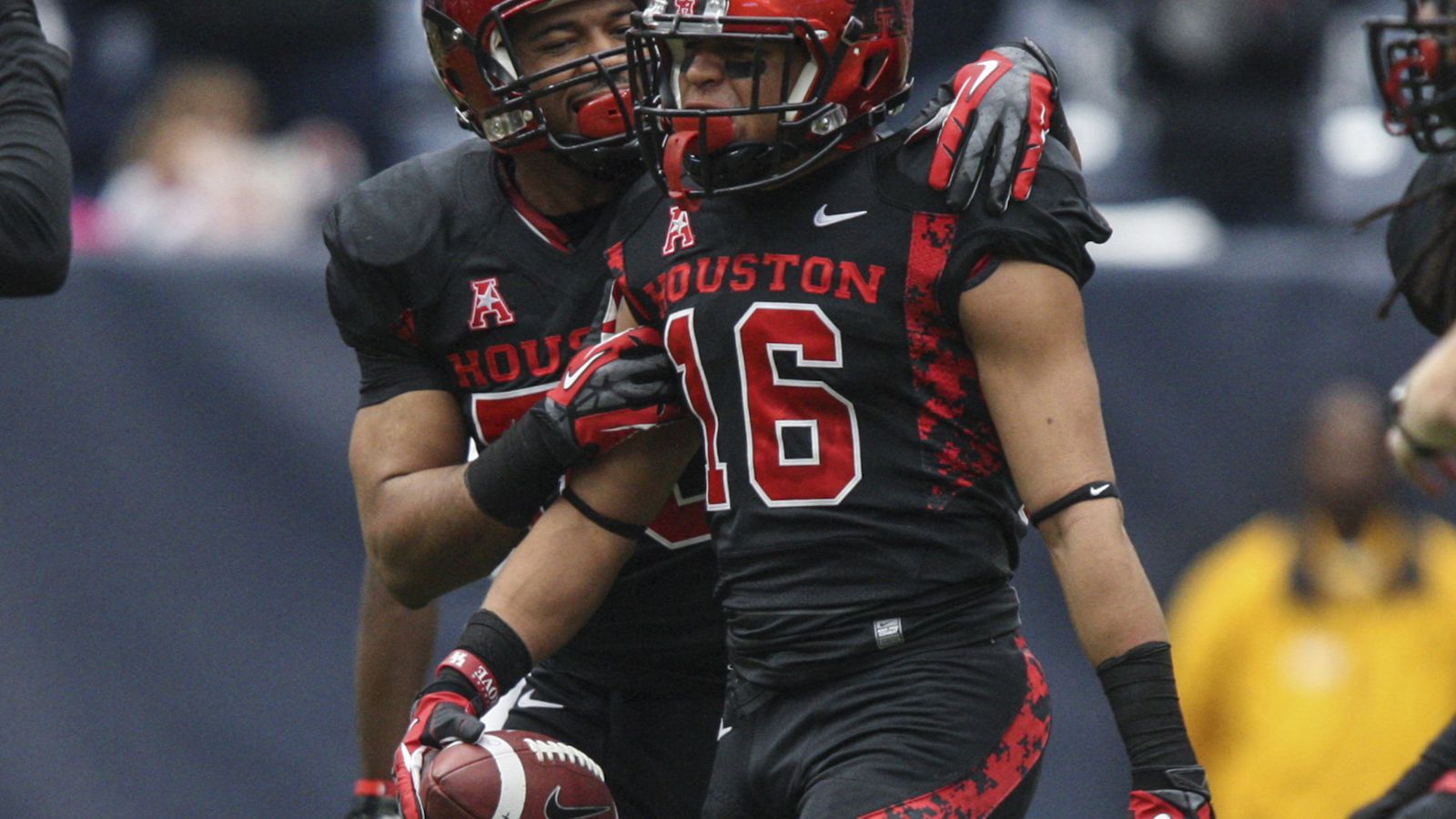 How to make your own luck

A school changes HCs and the good items of the previous ones are lost. The “jack boyz” were on top. That does not appear to have the same emphasis now. Where is the competition?

There are third party firms that keep custom analytics portfolios for CFB and NFL teams. At this point, most FBS programs have a contract with one or more of those firms. I’m sure UH has a firm they’re working with.

Harris & numerous other QB’s at the top of the QB stats played in 1 more game (conf champ) than Clayton too.

One more tidbit on the “analytics/stats” topic. As per ProFootballFocus (who reviews/grades every position on every play all season), Clayton graded out as the #1 passing QB in ALL of D1 CFB. Factoring in running, he graded out #2 overall. Yes, this includes the Heisman winner, all Heisman finalists, all SEC, B10, B12, ACC, AAC etc QBs (bested all of em starting w/the MPA). Many of you have been Clayton haters for his entire UH career (have a list of over 60 of you chronic CF complainers) but I can, w/o any hesitation, say no one worked as hard or cared more @ winning FB games in the athletic building than Clayton Tune. For all of you that consistently supported him, understand how difficult it is to to win in CFB/play the most difficult position on the field…thank you thank you for your support! He/we will remember the good times/positives & forever be indebted to the UH Administration, Athletic Dept/Coaches, Student Body & Alumni! Go Coogs!!

Why won’t we ever get the 4 or 5 stars in football? Basketball found a way and they had a much bigger hole to climb than football