I predict an ECU loss, then a Tulsa win and a Bowl Game win.

That puts us 6-2 since the OT loss to Tulane.

Such a record certainly won’t get Dana fired. And his last two seasons come in at 20-7. Again, not getting fired.

Going forward we all correctly see that recruiting success is critical. Always is. When Yeoman coached I never really worried about recruiting. Yeoman always found good talent. Even during his final season of 1986 he signed the studs that became the heart of Pardee’s teams. Yeoman signed Andre Ware.

We absolutely must have a Defensive Staff that can recruit. At present we do not.

I agree; Dana isn’t going anywhere unless we have a horrid finish in year 1 of the Big XII. The offense we’ve been running since the second half of Memphis is good enough to win any game, IMO.

We just need to restructure the defense and fix the stupid mistakes on both sides of the ball. I don’t know if Belk and Dana are BFFs, but Dana needs to make a change at the end of the year.

I am not as confident that we can handle a middling MWC juggernaut in a bowl game.

He is 6-4 on the season, a season we were expected to challenge for the NY6 and were the favorite for the championship.

After the four consecutive ass-whoopings we’ve taken from 2016-2020 by the likes of San Diego State Aztecs, Fresno State Bulldogs, Army Knights & Hawaii, I’m afraid how we might get blown out by any middling team from any conference.

Especially if our star players decide to sit out to prepare for the draft.

According to CDH, an AAC Championship & an NY6 appearance were our expectations before the season started, not his.

yeah chief if we get blown out in the bowl, he’s gone.

Yes, but Apple was not making 4+ million a year with baby more in the hook

I can see the ECU game being a lot like the SMU game, we score 60 they score 70, offense stalls a couple times. We sure as hell won’t be able to stop them. They only thing that’s gonna get Dana fired is if we blow Tulsa and get routed in the bowl.

I agree but think the D Line coach has done a good job.

I predict an ECU loss, then a Tulsa win and a Bowl Game win.

The ESPN bowl projections today were Liberty and NC State. Imo, both would kick our axe.

If we beat ECU, it will be the surprise win of the season. I do expect us to beat Tulsa.

I don’t like Dana but this is objectively false.

it doesnt matter what we do this year…it matters what we do next year… pretty sure we will be picked dead last…interesting to see how we handle it.

Good post and most likely correct on all counts. I don’t think this staff are good recruiters either. Getting people from the portal, while helpful, isn’t the same as selling a kid on four years with the program.

I like the JuCO option better than the portal because those kids have successfully completed one tier and are looking to move up. Don’t have the baggage of many portal guys. But Dana isn’t that great at that either.

I don’t know if we’re selling and the kids aren’t buying or if we’re just taking the easy route. It would be fun being an insider for a couple of days just to see what the MO of this staff truly is. It may be they are working their ### off and yhe kids just don’t want to come. I don’t know.

According to CDH, an AAC Championship & an NY6 appearance were our expectations before the season started, not his.

Did he really say that. I’m down on Dana but I find that hard to fathom.

It was a befuddling moment, and not word per word, but yes, CDH alluded to this in yesterday’s Post-Game Press Conference when Pawd Slama Jamma’s Aqib asked: “Is Bowl Eligibility something you guys can celebrate even though you guys have had the Season that maybe you didn’t expect?” 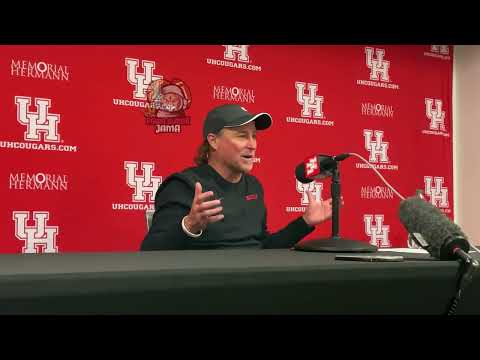 Then Aqib asks the exact same question to Clayton Tune, and Tune confirms that their (Team) goals were high, but they fell short of some of them. 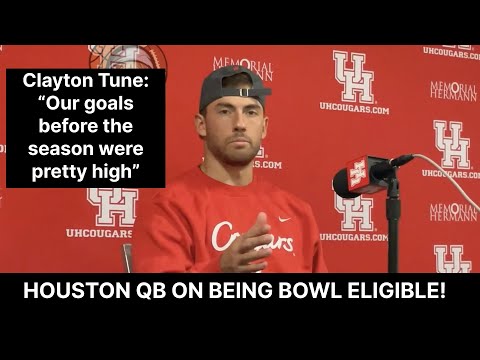 Eh. I give him a break on the COVID year, and a year to get his recruits in. This year though I totally don’t get. Honestly, this year wasn’t that different from last year. We won a lot of close games last year that could have gone either way. Just didn’t go our way this year.

I feel for Clayton Tune I really do. Guy has done something only Case and Kevin have done in a long long line of great Cougar QBs and overall its been a pretty underwhelming handful of seasons.