I miseed it last night. What was he so upset about?

It was a sight to behold, got mad for nothing. I really think he was mad the CFP was ruined before his eyes…autocorrect is auto-wrong on phones…

I just watched the replay… Herman wanted to come for Gundy after Gundy jumped in to help break apart his players from an end of game scrum… lol wut? Bizarre (and childish) behavior from the smartest coach in football. Then there was prolonged bro hugs between both coaches at the end.

Hey guys, the Cougars won last night…who really cares that Texas and Agy Hi lost or what Herman said in the heat of battle…enjoy our win…

This is Coogfans. We toast our victories and revel in the misery of our enemies at the same time.

Herman is about stunts he thinks are cool.

Herman don’t want none of mullet man. Gundy’s got that old man strength.

Gundy had his two sons with him too. They would have kicked Herman in the shins.

Really, please define enemy for me…you mean someone who was successful at UH and then left…like Herman, Sumlin, Hogersen, etc? Oh, ok now I know who to hate and hope to lose LOL…I am all for Texas and Agy losing, but not because of who coaches at those schools…

It’s just message board banter. Chill.
But yes, Herman sucks and though he had some success left our program in a classless and detrimental manner. And hell yeah UT is the enemy… we don’t have enough time in the day to discuss Austin’s antipathy for UH.

Herman is a loser in victory and a loser in defeat. Any time UH wins and UT loses is a GREAT day! 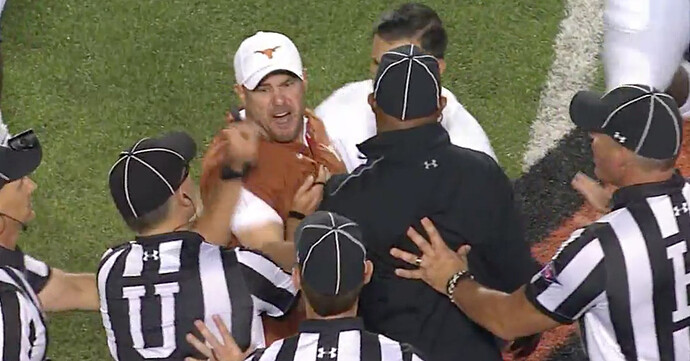 Texas and Oklahoma State had a big ole KNEELDOWN DUSTUP

Tom Herman and Mike Gundy both ended up on the field as tempers flared, but things quickly settled after discussion.

Lyin Tom looked just like George Brett when he stormed out of the dugout that one time.

Except you can tell LTH was using it as a stunt, calculating how it would surely earn him stripes with players, fans. What a mensa

No one is ever going to tell me I can’t celebrate a UT loss.
As far as ceremonial importance it ranks up there with a winning lottery ticket, a kid’s birthday, or an impromptu romp with the neighbor’s wife.

The greatest injustice is that I can’t see the UT fans filing out of the stadium…rot gut disappointment oozing from every pore.

Toms losing it up there. He needs to hurry up and take the Ohio St. job.

He was still mad about the hoax offsides. Personally I agree with that. However, once you become overweight all your irrational arm-flailing becomes more comical. Seeing him acting like a stooge in that UT gear was pure Bo Pelini.

It was embarrasing because 10 seconds in he realized he was protesting nothing. The ether of being on stage wouldn’t let him give it up.

If Herman had any class at all, he would have been out there yanking Hagar off the field by his face mask for being such an idiotic baby on that play.

What I like is that Texas does not have a good enough D to compete with good offenses like ours.