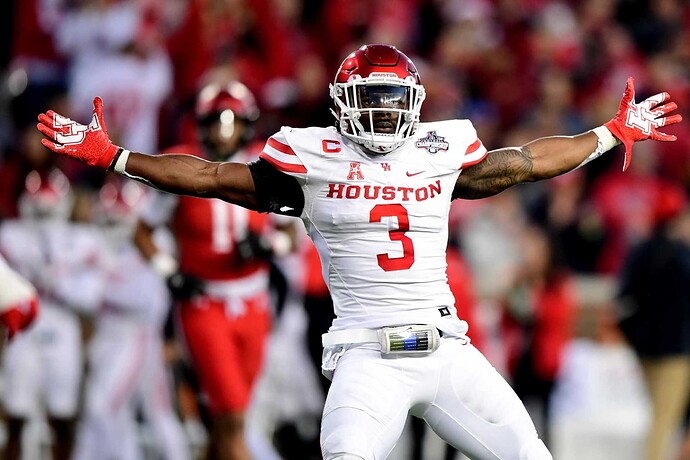 “Our heart and soul”

That is how third year Houston Cougars head coach Dana Holgorsen described his linebacker unit during a Spring ball media conference call last season. That was before a remarkable jump during the 2021 season in just about every defensive statistically category from the previous year. This article looks at the two linebacker spots in first year defensive coordinator Doug Belk ’s 4-2-5 scheme.

Leading the way will be Donavan Mutin (6-0, 230, Sr.), a three-year starter at the Mike (middle linebacker) spot. According to Belk, Mutin is “our heartbeat and brains, and his intelligence is through the roof.” The Spring-Klein Collins product’s cat-like quickness and high football IQ allows him to bring ball carriers down at or behind the line of scrimmage. Over 38 career games (28 starts), Mutin has 167 total tackles (99 solo), 12 tackles-for-loss while adding two sacks, two fumble recoveries and an interception.

With Deontay Anderson graduating, the weakside linebacker spot (WLB) will probably be manned by Mannie Nunnery (6-2, 225, RJr.). After playing in just ten games over his first two seasons, mainly as a special teamer, Belk expects the Shadow Creek product to be “an every down player because of his athleticism and toughness.” Nunnery is versatile in that he can handle making plays in space, though his heart is in the box as he is a hard striker. For his career, Nunnery has played in 28 games with 35 total tackles, 22 solo, 5 TFL and 2.5 sacks. He also has three blocked kicks as he’s dominated on special teams which helped developed him into what’s hoped to be a full-time role this season as Belk adds, “If you’re a young player you have to be able to play special teams to make the bus (earn playing time). If you make plays on special teams, you give yourself a chance to play more defensively and we play a lot of guys on defense.”

What excites me is how glowingly Belk speaks of Nunnery during that post spring conference call, “he’s arguably the most talented player on our D. His evolution has been fun to watch. He started out as a safety, moved to our nickel/Sam, played on the edge. Now he’s playing the weakside linebacker spot. He was the star of our 3rd down sub packages (last season) and ran that (communications wise). We’ve blitzed him. We’ve dropped him into coverage. He’s able to play man-to-man. He runs as well as any of our DB’s. He’s got the most size and athleticism in the linebacker room in his ability to make plays in space.”

Robinson is an “old school linebacker who’s fast and physical and has stepped up this spring,” according to Belk. The Snellville, Georgia native played in 14 games (with one start) last season and registered 34 total tackles (15 solo), 1.5 TFL, a sack and fumble recovery. This after the JUCO transfer got off to a slow start in 2020 due mainly to injures, playing in only four games with 9 total tackles (7 solo). Ranked as the #2 outside linebacker among the JUCO ranks by ESPN in 2020, Robinson had 42 total tackles, including two TFL, a forced fumble and a pass breakup three seasons ago in just six games at Fort Scott Community College in Kansas. In 2017, Robinson played at North Carolina where he registered six tackles in 11 games, mainly on special teams. The 3-star commit performed at South Gwinnett High School where he had 96 total tackles his junior season.

As I write these articles from Gainesville, Georgia, my favorite player may be someone who has yet to see a snap in his college career, Jalen Garner. Coach Belk seems to agree with me as he stated about the redshirt freshman during spring ball, “Coach Mac gave him the nickname of ‘pup’ because he doesn’t say much. He’s just looking around (on the field) with all the calls and checks. But he’s shown flashes (this spring) of why he was so highly touted coming out of Georgia. He can run and can tackle the football. He has a nose for the ball. He’s aggressive and loves the game. He’s gained a lot of respect from his teammates and his personality is starting to open up a lot more. I expect him to be a contributor this year and many more to come.”

If it were not for his size, he would have been offered by major P5 teams and been ranked higher than a 3-star by 247sports. Their loss however will be the Coogs gain as I see Garner as a Matt Adams type of linebacker. Named the Atlanta Journal Constitution 7A Defensive Player of the Year for the 2020 season, Garner produced 142 tackles (28 TFL) and six sacks. He added an incredible 200 tackles (148 solo) his junior season. Garner is also a hard hitter as he forced a combined eight fumbles over his final two seasons, recovering five of them.

Belk also had plenty to say about newcomers Morris, Cheeks and Payne, “he’s a converted safety who’s jumped in and done a really good job,” Belk on Morris. “He almost looks as physical as Mannie (Nunnery). He’s got the same type of game; size, speed and very athletic.” Coach Belk on Cheeks, “He’s been unbelievable (this spring). He’s very mature, very intelligent and very well respected by the guys already because of the way he works and communicates.” Finally, on the true freshman Payne, “He’s been one of the most impressive guys this spring. He’s going to be special. He doesn’t look like a freshman at all with the way he runs and hits.”

Morris played at Oklahoma from 2019 through the 2021 seasons. After redshirting in 2019, the Fort Bend-Bush product played in 19 games over the previous two seasons, registering 8 total tackles. He recorded nearly 200 tackles over his high school career as he was 32nd ranked safety and a 4-star recruit by 247sports. While Morris looks good on paper, Cheeks has produced on the collegiate level as he’s coming off a great two seasons at Samford. The Hampton, Georgia native played in 18 games and amassed 96 total tackles (49 solo), 11.5 TFL, 4 sacks, 2 fumble recoveries and an interception. Payne meanwhile was a tackling machine at Converse Judson, amassing an incredible 346 total tackles over the past three seasons. The high 3-star product would have probably been rated higher had he, much like Garner, had more tangibles coaches like, IE size, length and weight. Olsen has the intangibles to be the perfect mike linebacker; he’s shown to be a true leader both on and off the field at the Naval academy where he started multiple games at quarterback before transferring to Northeast Oklahoma last season. He had modest results under center as a triple option QB so late last season he played some linebacker where he was All-state his senior year and All-city his junior season in Oklahoma.

The linebackers will again be crucial this season as they must make sure both the defensive line and secondary are on the same page. Stay logged into Coogfans for more position preview articles as we take a look at a veteran laden secondary next week.

Thanks Jimmy…as usual, your write up is aces, and is an anticipated joy to read.
Thank You !!!

Great write up! Looks like we’ll be senior heavy heading into the B12 at the line backer position.

The Matt Adams comparison got me hyped for Garner.

This is an area of depth that has been overshadowed by the phenomenal depth we have upfront. Last season we were pretty thin at linebacker but we have really upgraded this position in the off-season. We can run a legit six linebackers on the field in our first team rotations and maybe even give Mutin a little bit more rest

Which will help tremendously on the outside with our two new starters at CB.

Fantastic write up (as usual), Jimmy.
I would make a couple of points:
If Mutin stays healthy he will be special. How long has it been since we had an AA linebacker? I remember David Hodge but that was 40 years ago.
And I question this business about our guys not having the “measurables”. I remember a guy at Baylor they said was undersized.
Michael Singletary, also known by his nickname Samurai Mike, is an American professional football coach and former player.
Height: 5′ 11″
Weight: 232 lbs

Singletary almost came to UH too.

Not surprising that the article started with Mutin! I am glad I hung around for the 10 plus hours to see Donavan win the game with his vicious hit and fumble recovery to win the game! Met his father earlier during the night and went back to him right after the play to congratulate him on his son’s play!!

Which will help tremendously on the outside with our two new starters at CB.

Along with the leadership we have with our two starting safeties and still have some solid experience at the corners with Hogan, Green and Rogers.

I’m assuming our base defense will be the 4-2-5 with Rogers at nickel. I don’t know who will play the rover-like LB position Stewart played last year or even if we’ll use that alignment.

It is really all the same. There will be times we have a nickel DB in there and other times at 3rd LB all based on the matchups.
I think we are in good shape having both who can play all downs and defend run and pass.

Are we on the verge of always having Yeoman/Pardee defenses?

We should be so lucky…and I think we are just that right now…
CDH has hired the right folks, and we have KEPT the right folks…the Defense this year ought to be just outstanding !!!

If we’re still going to run a 4-3 with the third LB playing more like a rover, I wonder who will play that position? On the surface, the transfer from OU may be the most natural fit since he was a safety in high school. We’ll see.

We have some good options with Rogers, Morris, Cheeks or potentially one one of a few backup safeties

Backed away when we got a commitment from Hodge. Until then was coming to UH.
What a duo that could have been. Hodge could have played OS backer but they both were great in the middle

We rarly have a 3rd line backer in there or “Sam” position. Belk likes the 4-2-5 scheme. 4 DL 2 LB and 5 DBs. He wants us athletic and fast and taking away the ball