In this model, the two teams with the best conference records, would go to the conference championship game. 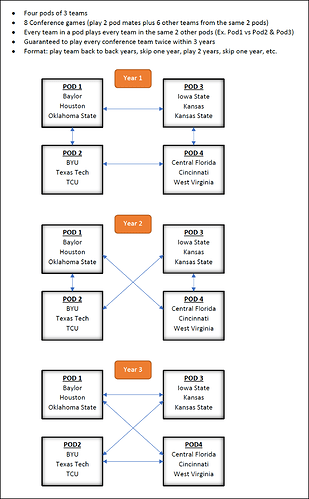 How would the conference championship game work? The two teams with the best conference record, regardless of what pod they’re in?

How would the conference championship game work? The two teams with the best conference record, regardless of what pod they’re in?

Yes, in this model, the two teams with the best conference record would go to the CCG.

Well done. Now, send it to the Big 12 Commissioner.

I’d swap Texas Tech and Baylor, but other than that this is my preference. Throw in some traveling trophies.

I’d be okay with this alignment, but Baylor and BYU seem to be itching for a rivalry, TCU and Baylor have a rivalry, and TCU and BYU have a history of playing one another. So to me those three are good together even if moderately less geographic.

I do think they’re going to want to go with 9, but you can work an extra game in there. A little more complicated, but not much.

Yes I can see your logic on the religious pod but not sure TCU wants to be labeled as such or even want to rekindle the BYU rival from the WAC days.

Of course the conference can make any three team setup they prefer, but the objective was to show how a 12 team model can play 8 conference games and play every none pod team twice within 3 years. In the SEC, it takes about a decade for some teams to visit another.

I’m not sure the Big12 wants to stay with 9 conference games when the other conferences are evaluating going to 8. Since the SEC will have 16 teams, they may go to 9 games and may want to link up with the Big12 for non-conference play.

I am fine with 8 or 9. My guess is that they’re going to want to do 9 but if we can work something out with the SEC that may make 8 a better idea.

As far as BYU, half the TCU people may like seeing them again, but the other half will want nothing to do with them and just as soon let someone else have them. The BYU ego reminded too many of UT.

No rivalry forms by someone thinking they want to form a rivalry, so BYU/BU - don’t force it.

No idea on the BYU perspectives if they have preferences. The only team they have any history with is TCU.

With this model, I’m not sure an every year rival is required since every team will play a non-pod team back to back (home and away) then skip one year and repeat. It can still be a home and away rival with one year break.

You may be correct, but if not for the SWC breakup, the TCU-BU rivalry was one of the longest in Div 1, longer than UT-A&M and Michigan-Ohio St. if my numbers are correct from then.

For a conference with only really four long term rivalries (100 year), breaking them up, does not make sense… (You have the other three all in the same pod)

Unless the conference goes to PODs, we will never know.

I agree you can’t force a rivalry, but some potential rivalries rest on more fertile soil than others. I think one of the issues we’ve had is that we’ve typically been in a division where the soil was pretty barren because we’ve been in a division primarily with small private schools and distant city schools. (Some might have formed just by division competition and matchups, but we never cultivated those.)

Put Baylor and BYU together you’re more likely to get something than if you put BYU and Tech (or Iowa State or whatever) together. Which the fit is what Baylor fans see (BYU understands rivalries and is geographically isolated so I’m pretty confident there as well). TCU is not as good a fit but is also a reasonably good fit. Maybe a rivalry happens or maybe it doesn’t, but I don’t think the schools here are interchangeable as far as that goes and with a conference as disparate as ours you take what potential rivalries they are and see what happens.

I like the proposed pod system, each pod is pretty competitive.

Can’t wait for the new Big XII conference to begin. My nearest locations to see the Coogs play will be ISU, the Kansas schools and Cincinnati.

Yes it would be beneficial to the Big12 to keep these 2 together annually. Their game has high respectable viewership.

Love this concept, but selfishly, I would like TCU in our pod vs OSU simply for geography…easy road games every year for all fan bases. And, it keeps the TCU/BU rivalry that has been previously mentioned. But, this system addresses playing all other schools within fairly short time frames.

The Texas schools have already said they require to be together in same division…Oklahoma State has said THEY require to be with them. I am certain that is the way its going to be. But dont worry, all coog fans in midwest…We will have 4 cross over games every year against the Kansas schools and Iowa State and cincy and BYU…

The B12 needs to apply the KISS principle to division alignment:

East: FCU, WVU, CIN, IS, K St, KU
West: UH, Bay, TCU, TT, Ok St, BYU
UT and OU are temporary, flip a coin and plug them in. One in the east and one in the west.
Use an 8 game conference schedule (5 division and 3 crossover games) and each team will play home & home against every team every 4 years.