Now This Is Funny!

Sacheen Littlefather’s sisters say she was not Native American. The actress had disputed similar claims before.

In 1973, actress Sacheen Littlefeather stepped on stage at the Oscars on behalf of Marlon Brando, identifying herself as a member of the Apache tribe and turning down his award because of the way Native Americans were treated in the U.S. Now, her two sisters are saying she lied — their family is not Native American.

Littlefeather, who died earlier this month at age 75, was active in the Native American Bay Area community. During her speech at the Oscars, she said she was president of the National Native American Affirmative Image Committee. In an interview published in a San Francisco Chronicle opinion column over the weekend, her biological sisters, Rosalind Cruz and Trudy Orlandi, said Littlefeather did not tell the truth that night.

“It’s a lie,” Orlandi told activist and writer Jacqueline Keeler in the exclusive interview. “My father was who he was. His family came from Mexico. And my dad was born in Oxnard,” a city near Los Angeles. 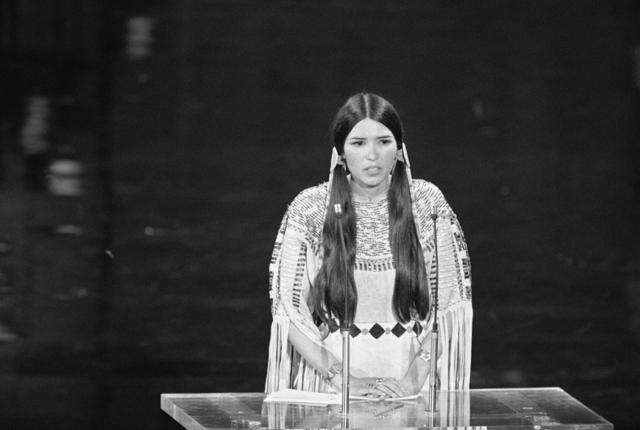 Sacheen Littlefeather addressing the 45th Academy Awards in October 1973, declining Marlon Brando’s Oscar for best actor on his behalf. She wore a buckskin dress and moccasins.BETTMANN VIA GETTY IMAGES

“It is a fraud,” her other sister said. “It’s disgusting to the heritage of the tribal people. And it’s just … insulting to my parents.”

During her Oscars speech, Littlefeather said Brando was turning down his award because of the treatment of American Indians by the film and TV industry as well as protests at Wounded Knee in South Dakota at the time.

She was met with harsh criticism, and she said actor John Wayne even physically threatened her, attempting to take her off stage, before security guards apprehended him.

The homepage of Littlefeather’s website addresses these claims, disputing film critic Roger Ebert, whom she said incorrectly called her a “Mexican actress.”

“Contrary to misinformation which has been published on the internet, Sacheen Littlefeather is indeed of true Native American Indian descent,” the site reads. "Sacheen was born Marie Cruz in Salinas, California. Her mother is French-German-Dutch, and her father was from the White Mountain Apache and Yaqui tribes from Arizona. " 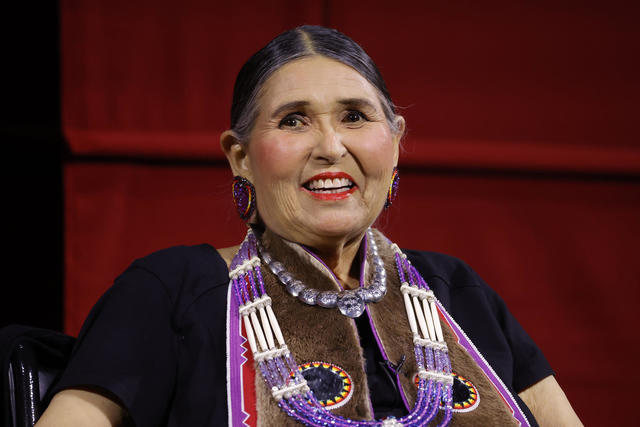 While “Cruz” is her father’s recognized tribe name, the site says, Sacheen took the name “Sacheen Littlefeather” after high school to reflect her heritage. “She is not a ‘Mexican actress’ as Roger Ebert incorrectly reported.”

Ebert wrote a blog post about Brando in 2004 that the actor “will always be remembered for refusing to attend the Oscar ceremony for ‘The Godfather’ and sending a woman named Sacheen Littlefeather to protest discrimination against Native Americans.”

More than 49 years after she made the Oscars speech, the Academy of Motion Pictures and Sciences, which holds the Oscars, also known as the Academy Awards, announced that they had delivered an apology to Littlefeather for the mistreatment she received. Roughly two months later, Littlefeather died.

CBS News has reached out to the administrator of Sacheen Littlefeather’s website about her sisters’ claims and is awaiting response. 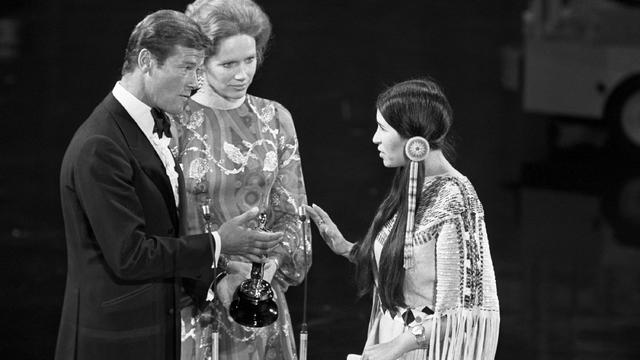 At the 1973 Academy Awards, Sacheen Littlefeather refuses the Academy Award for Best Actor on behalf of Marlon Brando who won for his role in The Godfather. She carries a letter from Brando in which he explains he refused the award in protest of American treatment of the Native Americans.

In two separate interviews, Orlandi and Cruz said their family has Spanish heritage and they have never claimed to be Native American. The sisters approached Keeler because she had been compiling a public list of what she calls “Pretendians” — non-Native people who are suspected to be lying about their Native American identities.

The journalist says through research she found no documents from her father’s extended family linking them to any Native American nations in the U.S.

Family records for events like marriage and baptisms date back to 1850 in Mexico. The records don’t place either side of her father’s family near White Mountain Apache or Yaqui communities, but she found the family lived in a village that is now part of Mexico City.

Keeler says the first records that identify Littlefeather as Native American are from the 1960s — news outlets in the Bay Area reporting on her modeling career when she was a college student.

For the column, Keeler, who founded a group that advocates for an end to mascots based on racial groups and opposes cultural appropriation, also spoke to others who disputed claims Littlefeather made throughout her life. CBS News has reached out to Keeler for a statement and is awaiting response.

Orlandi said some of Littlefeather’s claims “infuriate” her. CBS News has not been able to reach either sister with a request for comment.

Plastic recycling is a “failed concept” in the U.S., study says

We still have Liz Warren.

This lady is apparently the Liz Warren of Hollywood.

I’m trying to figure out what is actually funny here.

Yeah, it’s just kinda sad really that she apparently pretended to be someone she wasn’t.

Liz Warren’s case uhlaw97 was completely different. Liz went by what relatives told her and believed. I don’t see anything wrong with that.

I’m still trying to figure out what my exact heritage is because my grandfather gave conflicting information on various government documents…for decades if you asked I may have told you something that wasn’t true. About 10 years ago we found some stuff on Ancestry.com that didn’t jive with the family tales. Still haven’t figured out what the actual truth is. So, if you asked me something in 2000 I may have given you false info purely by mistake. If that’s a problem for some…it’s on them…not me or Liz.

Right, she used it to gain access to things she could not atain otherwise.

I had a assistant that worked for me a few years ago that told us she had her son put that he was Samoan when he applied to college in order to get a leg up on the college of his choice. Both her and her husband were born and raised here in Texas and of Mexican ancestry.

Yeah, I know my family definitely has dubious tales about an ancestor with “high cheekbones” who “looked like she walked right off the reservation.” My mom actually encouraged me to list that I was of native ancestry on my college and scholarship applications. I know for a fact that I wasn’t the only person I knew with these stories growing up.

She was never an enrolled member of any recognized Native American tribe and was obviously NOT a person of color.

She was a blonde haired blue eyed WHITE CHICK who would never face any discrimination based on race.

She simply tried to pass herself off as a person of color in order to advance herself.

Cultural misappropriation at its finest.

My wife grew up also thinking that they were some part Native American because of some picture of a family member with a lady in full Indian attire. Also thought Italian bc of the dark features. Well one day I ended up taking a Ancestry.com test just for the hell of it and to see how accurate this thing really is. My sister took it and so I wanted to see if it would link us like it claims plus I know were I am from so I wanted to see how accurate that part was. Anyway long story short, it is very accurate. Even linked my niece to me when she took it later. My wife took it and turns out she is 70% Scottish then English and finally followed by some other very minor stuff. No Native American or Italian though.

We thought my great grandma on my mom’s side was half Native American. 23 and me and ancestry both said differently.

We think that Chief Bowles was our grandfather’s (his last name was Bowles) great-great-great-great-grandfather. You’re probably aware of Chief Bowles if you’re familiar with Texas history. His father was a Scottish immigrant and his mother Cherokee. Chief Bowles was friends with Sam Houston, who negotiated a treaty granting the Cherokee, with whom Houston had lived, a couple million acres of land, but it was rejected by the Texas Senate. When Lamar became president he demanded Indian tribes leave or be removed by force, which led to conflict and Chief Bowles’ death.

His facial features are similar to what my grandfather’s were: 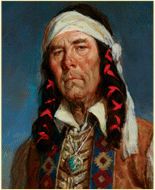 Why isn’t warren not disbarred?
She lied to gain access to law school.

She wasn’t falsely identifying as Native American in those days.

That came later when she was in academia.

Are sure about that?
What did her application into law school say?

As late as the early 80s she was still identifying as White on available docs.

It changed in the mid-80s when she started putting “American Indian” for her race on her TX Bar docs. 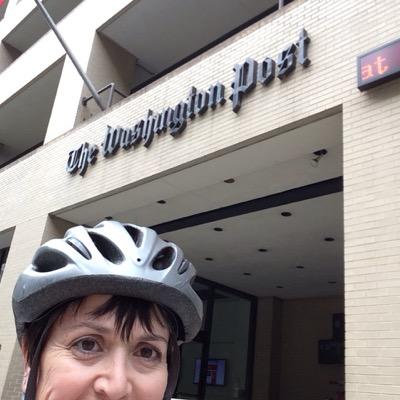 @AmyEGardner
Here is the form Elizabeth Warren filled out for the State Bar of Texas claiming American Indian heritage. https://t.co/VwHifS7BCL 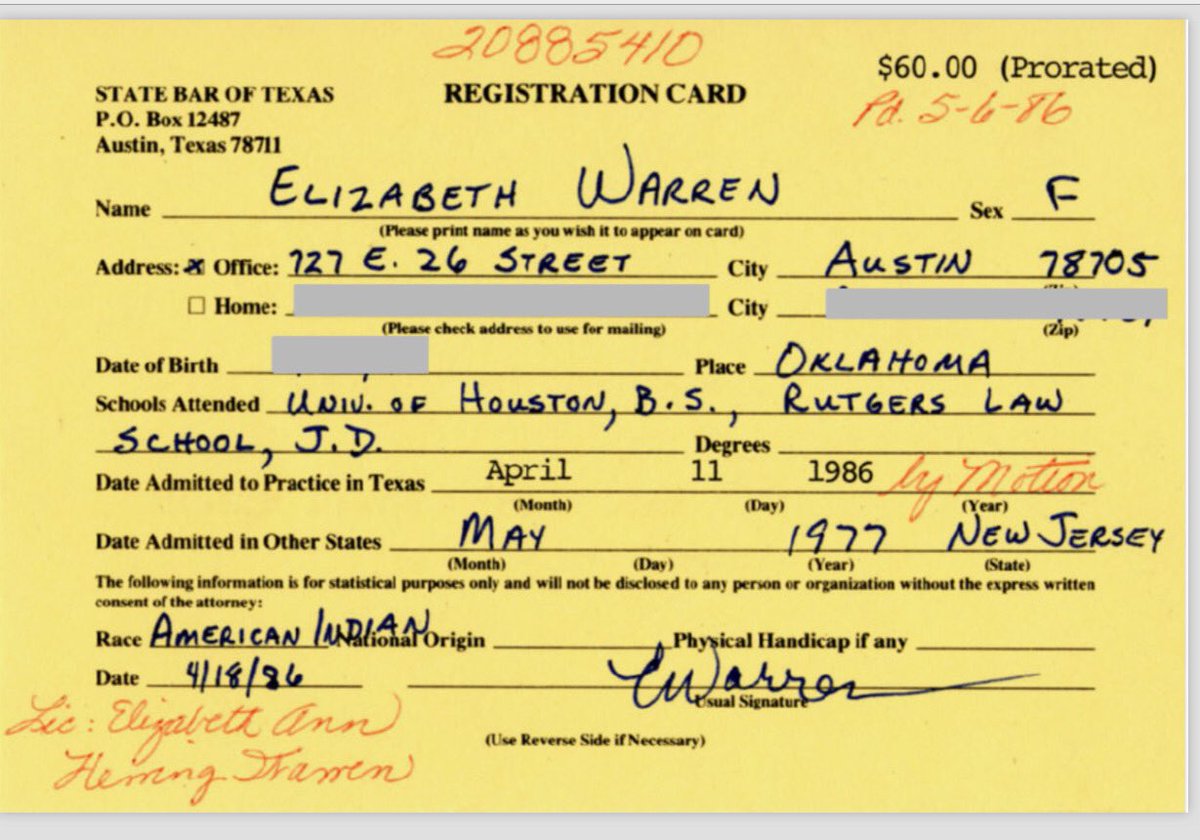 She clearly lied. Is that ok to lie and get your bar license?
No only did she lie once she lied for decades.

She probably did lie, but proving it would be hard.

She can simply claim that she was mistaken as opposed to dishonest.

Are sure about that?
What did her application into law school say?

And never acknowledges it. Just repeats lies then changes the subject.