I was not following UH a decade ago and was curious about a backup QB - Bram Kohlhausen.

I don’t think he played much in his time here. Was there any story on it, good player, not good player, etc…?

He was a 3 time Heisman winner for me on NCAA FOOTBALL!

In reality, he transferred twice. Ended up at TCU. Had a huge comeback in a bowl game against Oregon.

He couldn’t beat out Piland. Went to JUCO, dominated then landed at TCU. Couldn’t beat out Boykin but after Boykin got suspended because of that bar fight, he started in the bowl game and came out with a W. 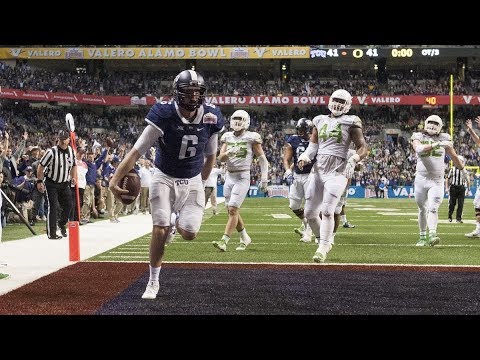 If Walt Disney Pictures has its way, Oregon's misery from the 2016 Alamo Bowl could be immortalized forever in a movie featuring TCU backup quarterback Bram Kohlhausen.The Horned Frogs trailed the Ducks 31-0 at halftime of the Jan. 2 game before the...

He was a pretty good recruit. I remember we signed him and two of his teammates from Lamar. Looks like he left UH to attend a junior college then ended up at TCU.

was a mega fan favorite… all the “fans” saw him as the keenum heir apparent because they liked him over piland…
piland beat him out which caused debates on the boards (on kolh’s freshmen year)… finally given minutes in a game vs smu, in the middle of them blowing us out… he didnt help, he had 2 drives that resulted in 2 picks… the fan fair around him disappeared after that, and everyone jumped on the john o’korn bandwagon, an incoming recruit that had committed

I got the TCU part down pretty well. Even a book coming out on that part too (Remember the Alamo Bowl), along with some family part in his life (Dad passing).

I wasn’t sure how it played out with the UH part. So the part about Piland and O’Korn make sense now. Sounds like fans were fickle after the two interceptions and quickly moving on. Does not sound like he was allowed much opportunity here to excel. Were Piland and O’Korn really good at running the games and/or stats? I know the part about being behind Boykin was tough with what Boykin was doing on the field.

PIland was almost despised here when he played, but he put up decent stats… we just lost a ton whenever he was qb… keenum was qb in 2009, we were top 25, in 2010 keenum get injured and we lose almost every game after with piland (qb drama this year too, a different 4star freshmen qb was on roster, that we didnt play, that the fans really wanted)… 2011 keenum is back and go 13-1 and have historic season (only keenum the difference)…we go back to piland in 2012 (brams 1st year) we go back to losing… piland stats were decent we just lost everytime he was qb

O’korn came in with a ton of fan fare, he had just had a dominant high school career at st thomas aquinas (super powerhouse high school), bram transferred out right when he came… O’korn beats out Piland, and goes on to have a great year by freshmen standards (wins freshmen of the year in the league)- at the time we thought he was the 2nd coming… hindsight he just kept throwing the ball to a elite receiver we had (staring him down) who just kept making plays…he really wasnt good at reads 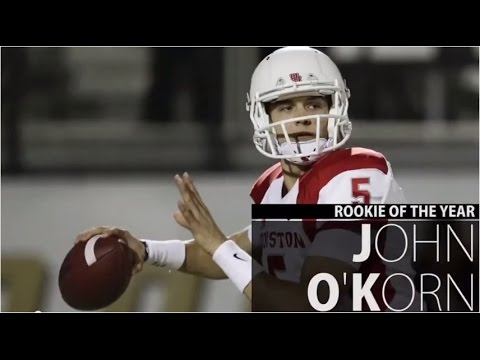 his sophomore year was terrible , and then in string of weird coincidences; okorn gets the flu one day in practice, so a WR who was recruited as a QB got reps at QB, he did so well in practice, that when okorn struggled the next game, he gave the WR reps at QB, he did so well that he never gave up the position… he ended up a Houston legend in Greg Ward… Okorn Transferred “up” to Michigan where he grew to be one of the most despised QB in Michigan history in a career that ended in flames

I just remember watching the Alamo /bowl thinking it was an amazing way to end a career that did not seem to have many highlights.

O’Korn did not beat out Piland. Piland retired because of too many concussions. He left, I believe the Temple game, early because of a concussion and the hit was minor.

That’s the way I remember it too. However, it seemed like the school did seem to try and downplay how seriously hurt Piland was (or at least it appeared that way to me). It was a disservice to him.

It was a disservice, but it was also a tough call. Piland was a real gamer and he wanted to come back and play after the concussions he had sustained. I was at his last game, which was against Temple at Lincoln Financial Field in Philadelphia. He started and was more than just ineffective. He looked lost out there. Levine pulled him after the first quarter. It was sad, but the right thing to do.

It was a decent competition but O’Korn didn’t beat out Piland. Piland was doing well against Southern and Temple until he got that concussion and left the game.

Never fun when a player gets pulled for injuries such as a concussion, but far better for their long term health. That outweighs a game. Wanting to go back in does show the strength of character for a player (or at least stubbornness).

I talked to Piland quite a bit in classes we had together. Super nice guy. Hated to see how it ended for him, but glad he decided to call it quits instead of risk further injury.

I was always curious how BK would do if he got in. I remember he supposedly had a great arm. That Smoo game was a trainwreck all around. I did keep up with him after he left.

Does anyone know what Mr. Piland is doing nowadays?

Happy for him. Never met him, but heard he was a good kid.

Glad to hear that. He seemed to be a high quality guy.

How many hands does it take to catch a football?