Wouldn’t argue with that…Texas after all, run by the supposed ‘we hate taxes’ party, has a higher gas tax than the Fed Government.

Just sayin what I wish would happen…not believe will happen.

Which reminds me…does Texas tax gas at the refinery level?

I’m not aware that we do. Please, someone correct me if I’m wrong with that.

Because I think that would be a genius tax to replace* the at the pump tax.

This way…every gallon of gas refined in Texas that gets exported out of state and country helps fund the Texas government.

Think of all the tax dollars we could be getting from out of state gas users who benefit from being so far from the toxicity of the refineries that we Texans put up with! Eff them…and tax them!!!

*My only fear is lawmakers wouldn’t “replace” the tax…just add a new one and we’d then have two state gas taxes instead of one.

Which reminds me…does Texas tax gas at the refinery level?

I’m not aware that we do. Please, someone correct me if I’m wrong with that.

No, it’s tax at the terminal when the trucks load up the fuel to take to gas stations.

Because I think that would be a genius tax to replace* the at the pump tax.

This way…every gallon of gas refined in Texas that gets exported out of state and country helps fund the Texas government.

There are likely interstate commerce issues with that. I doubt that would be allowed. In any case, that would require a law change and would set off all kinds of state retaliation.

I believe we already have an oil production tax. Start the refining tax off at a very low rate so as not to cause retaliation or loss of refining capacity…then bump it every now and then.

I wouldn’t equate an oil severance tax (done at the wellhead) to a finished product like gas/diesel.

Why not? If all finished gas/diesel were taxed, not just those going to in state gas stations, they would be very similar.

Because of interstate commerce issues.

Yet, there aren’t any interstate commerce issues with taxes at the wellhead…for a product which can end up out of state both as a raw or refined product.

Yes, it’s different. One is a finished product about to be sold to end users.

I don’t know details of the ins and outs but this has been litigated.

I’d be in favor of re-litigating it. Texas is many state’s “back yard” with loads of environmental issues those states get to avoid. It should cost them…

I don’t think the case would be taken. Interstate commerce is pretty settled law. But who knows.

It’s not a crazy suggestion. It’s just a space I’m probably too familiar with.

Banning electric vehicles—or posturing about wanting to—is a political stunt in an era already overstuffed with them.

I thought Cali already had a Mileage tax program in place. Something about tracking your car with a gps in the odometer and then mailing you a bill based on the mileage.

Negative. At least not something that’s required. I lived there for 5 years and didn’t know anything about it. Maybe they are testing something.

I think it was Oregon that enacted a mileage tax.

No one electrocuted. Sorry haters. 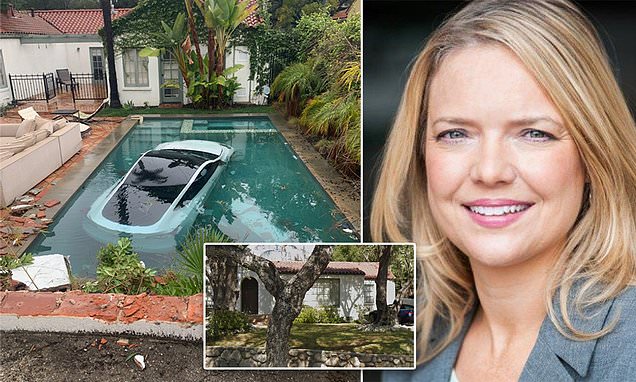 A Tesla driver smashed into a wall before driving into a residential swimming pool belonging to Disney's top HR lawyer - one of the more bizarre accidents amid Southern California storm chaos.

lol. Now they’ve come up with a new term called “deadhead” mile to try and discredit on EV’s?